“The Peanuts Movie” was good. I loved it. So did my kids. Odd today to think that kids would be expected to attend a movie that did not involve peril or violence or parents being offed – and love it.

There were subtle nods to “Peanuts”’ always understated (sometimes lagging) but not insignificant reflection of “race” and “gender” issues in the US.* However, it is in keeping the meandering, peaceful style of Peanuts that the Schulz team took a bold stance. This was a brave narrative choice in today’s climate of “children’s stories” where long sequences of intense violence or peril and destruction pervade. A few tiny moments of the Red Baron sequence aside (and even these were light-years from recent cataclysmic kids fare), the story was breezy, peaceful, without extended intensity, and…fun. Maybe, just maybe, the writers knew what they were doing. 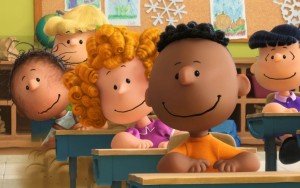 The animators might have known what they were doing as well. “The Peanuts Movie” utilizes deceptively advanced well-executed animation. It’s funny, before the movie, my son said, “it looks like they are not doing the cartoon way, but a 3D-looking style.” I cringed a little inside, just a little, because, while I was curious to see the new way, I liked the original style. The team must have anticipated curmudgeon parents pining for the old days, because the 3D rounded figures had, melded into them, the 2D line style. Inky highlights would become slightly more prominent, then fade into the 3D bodies but never fully go away. Somehow, the aesthetic qualities of the old and new were honored, and all blended to be one style of distinct and effective animation. Interestingly, this fusion is not an easy accomplishment, even as it does not telegraph itself by saying, “look at how amazing this animation is!” Is that called, craft?

It’s like that “Citizen Kane” shot… (yes, yes, I am comparing “Peanuts” to “Kane”. When you remember what the mogul pined for the whole movie, and his name, it ain’t so far off). Anyway, it’s like that shot where Kane and his newspaper partner are talking, one far behind the other, in two different lighting setups. Resolving lighting contrasts within long depths of field is something that the human eye can pull off, but was (and remains) nearly impossible to pull off with movie cameras. The blend was a real accomplishment for Orson Welles and crew, but the result was just a scene of two people talking. Similarly, for the Schulz crew, the 2D/3D blend was one of several seemingly simple but rather difficult animation accomplishments that, heaven forbid, served the story without drawing too much attention to itself. 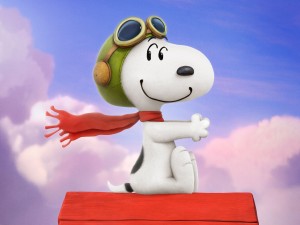 Beyond the 2D/3D meld, there were moments — in parts of the Red Baron sequence certainly, but threaded into main sequences as well — that flashed photo-real CGI detail as vivid as any previous effects-heavy Pixar/Disney/Blue Sky feature film.** However, these brief super-animated moments were just well-placed flourishes, the overarching animation pallet, while technically advanced, was simple and pleasant-looking, perfectly befitting the gentle story. It was almost like the Schulz team was saying to glitzy animators of today, “we’ve been animating a while and, while we can do the fancy stuff, we can still do more with a line and a few colors (or just a line!) than all the CGI combined.”

This was the first young kids’ movie in a long time made for kids, and not for adults (studio heads, reviewers and advertisers) who don’t remember or care what kids actually like. That said, there were adult, particularly industry, winks. I will decode one of those winks underlying the whole movie. The loose thru-line of the movie is Charlie Brown thinking he can make a new impression on a new kid moving to town. He won’t be the simple, sincere but bumbling kid he has been. He’ll be a new, cool, improved Charlie in the new kid’s eyes. Charlie Brown does try at first to become different, to improve. Indeed, he has flourishes where we see him truly being a good dancer, or even learning some cool magic tricks, and so on. But, of course, he ultimately bumbles attempts to be something he is not, and he is revealed ever more as himself over and over again. 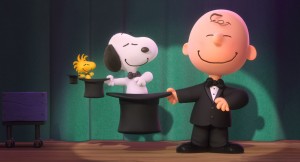 While this is a sincere and touching story in itself, the new kid is also – the new audience (of new kids). Charlie is, of course, the Schulz team of animators and writers wondering (and likely being pushed by studio execs to explain) how they, the simplistic airy storytellers they have been, will impress the new kid(s), the new audience, presumably waiting to be impressed by more wiz/bang CGI glory. Just like Charlie, one can imagine the Schulz team learning the new CGI dance, and even coming up with a few new tricks like a 2D/3D blend. But, just as with Charlie Brown, the CGI and other flashes, as interesting as they were, ultimately led the Schulz team to return again and again to their roots, their true selves – line, color, sound, and lots of heart. And, just like the new kid in the movie, the new kids watching the movie liked Charlie Brown for who he really is.

Oh, and Snoopy remains the coolest. I’d have written more about that, but one can’t really explain that Snoopy is cool, he just is. He’s Snoopy.