Movie Review – THE NIGHT BEFORE

WHEN I THINK OF THINGS WE DID, IT MAKES ME WANNA CRY

I’ll say at the outset that I’m a Seth Rogen apologist. I loved “The Green Hornet”. Rogen wisely wrote himself a superhero character that he could play, not stretching out beyond his grasp and smartly leaving the heavy lifting to Kato. Plus, there was an action scene I’d never seen before, which is all I can ask of any adventure movie. I’ve loved pretty much every film he’s done. But….lately, I’ve only loved about every OTHER film he’s done. 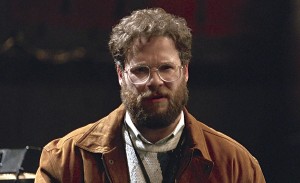 “The Interview” didn’t quite connect with me as I hoped it would, garnering more laughs when it spoofed Hollywood than when it lampooned North Korea, and James Franco’s mugging became tiresome. But Rogen came back strong with an excellent, gloomy performance as Steve Wozniak in “Steve Jobs”. So if the ‘every-other-Star-Trek-movie-is-good’ theory really applies to Rogen’s career, “The Night Before” was set to disappoint. Sadly, it does.

“The Night Before” involves three friends – Ethan (Joseph Gordon-Levitt), Chris (Anthony Mackie) and Isaac (Rogen) – who make a pact to assemble every holiday. The tradition began in the wake of the death of Ethan’s parents. Times change – Chris has become a celebrity athlete and Isaac is on the verge of becoming a father, so this year’s gathering is going to be the last, but also the best, as Ethan weasels tickets to the up-till-now-out-of-reach exclusive Nutcracker Ball Christmas Eve party. 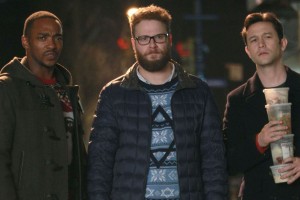 It seems like the laughs will come in bundles with the three leads playing fast and loose at the top of the film, but the warmth shared between the leads that could excuse all the crude behavior of a stoner comedy wears away leaving a less than pleasing mixture behind.

At the top of the night to end all nights, Rogen is given a complicated mix of heavy drugs by his wife to kick things off. Remember that scene in “Knocked Up” where Rogen and Paul Rudd see a Cirque du Soleil show on ‘shrooms? HILARIOUS. Not only does Cirque lend itself to being totally lit, but that night was necessary to the characters, who were cracking under baby pressure. Rogen’s film-long burnout at the hands of pretty heavy drugs in “The Night Before” doesn’t have that same effect. It grows wearisome after a while, and mostly because it draws him away from the cause of spending quality time with his friend Ethan. Ethan is in the morose throws of a post-breakup, and Rogen’s constant altered state and Mackie’s ego-centric stomping don’t help him at all – a missed opportunity to back all the antics with heart.

Even an attempt to bring Ethan back together with his lost love gets filtered through a bunch of pulverizing comedy scenes a The Nutcracker Ball that include a cameo by Miley Cyrus that plays her out to be a much bigger icon to people in their mid-thirties than I ever thought imaginable.

Playing it very, very low-key and getting more laughs is an uncredited Michael Shannon as a pot dealer who has a sort of “Christmas Carol” effect on the main players, imparting wisdom through the creepy filter that is Michael Shannon. 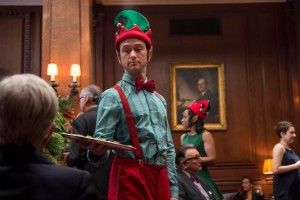 I’m not too worried ‘cause if the Rogenometer reads correctly, his next movie should be great.