CABIN IN THE WOODS

Quentin Tarantino films often have extended scenes where characters elaborate about a subject while the viewer gets to play “what’s really going on here?”. Think of the struedel scene of “Inglorious Basterds” when Hans Landa spends so much care and attention on getting his dessert just right but really he’s subtly questioning Shoshanna, all the while unnerving her. Or the scene where Calvin Candie in “Django Unchained” goes on to Django and King about the parts of a skull the whole while knowing he’s got them unmasked and knows their real intentions at Candieland. But instead of coming out with it, he lets them stew to feed his ego, to own them.

The most effective ways Tarantino writes like this are when the scenes about something innocuous end in horrible violence. The opening of “Pulp Fiction” is the most famous, where Vincent and Jules go on about fast food in Europe (“But what’s really going on?”), then they get guns out of the trunk, but instead of launching into a confrontation, they start talking about TV show pilots (“But what’s really going on?”). Finally, they go inside an apartment complex and begin to talk about foot massages (BUT WHAT’S REALLY GOING ON HERE?!). When we finally arrive at the confrontation our two hitmen have with the low-rent criminals they’re there to intimidate, the audience is all pent up and ready for a shootout and the impact is emotionally effective.

Think of the end of “Kill Bill, Part 2”, Bill makes a damn sandwich, talking about whatever before they finally throw down! And the most insane scene to reflect this set-up/punch style of Tarantino’s writing is also from “Basterds”, where Allied spies infiltrate a tavern dressed as Nazis and gain favor with the local SS soldiers by playing a card game that goes on while you KNOW there’s more going on. Somebody knows something they’re not telling and suddenly the worst situation for everyone erupts. 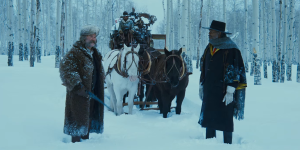 Tarantino’s latest film, “The Hateful Eight” is a three hour epic. The first two hours are the talking that I previously mentioned – stories and theories and character development, with a whole HOUR of the horrible violence!

Quentin’s western doesn’t have quite the rich dialogue spread out over the first two hours of the film as it did in shorter spurts with the likes of Hans Landa. The characters tend to go into story a lot, as opposed to being in more in-the-moment conversations, but something drew me in to where the final-hour finale packed a big punch.

Another popular Tarantino trait is to mimic the films he loves. He did that the most in the “Kill Bill” movies, jumping genres and employing cinematic conventions however the hell he wanted to tell his story. There was certainly no rule book he was required to follow. “The Hateful Eight”, coming after “Django Unchained”’s homage to the western revenge tale, throws nods to the more classic western films from the likes of John Ford and Sergio Leone (especially when Tarantino’s camera, with his great DP Robert Richardson, uses all the power of expansive 70mm film to give us character-laced close-ups). However, both westerns end in violence that is signature Tarantino.

The script takes this classic look and brings together strangers to, in the end, tell a who-done-it story. Tarantino said every western has a mysterious character no one can figure out and he wanted to make a film with ALL characters of that type. The story begins with Marquis Warren (Samuel L. Jackson), an ex-Civil War soldier and bounty hitching a ride with John Ruth (Kurt Russell), known as “The Hangman”, who’s toting his latest criminal, Daisy Domergue (Jennifer Jason Leigh), to hang in Red Rock. A storm delays them in a haberdashery with a number of nefarious characters. Let me just say stories get told, acquaintances get made and trusts develop…shakily. Soon, various lethal acts have everyone on edge and wanting answers as to their counterpart’s true intentions. 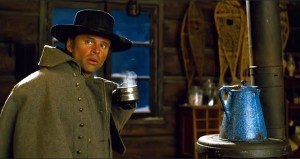 Although he’s appeared in a few films, this is really Walton Goggins’ coming out party (on film – he’s had a fantastic TV career). He plays Chris Mannix (Tarantino characters have such great names), the new sheriff of Red Rock caught up in everything when he needs to hitch a ride in the same wagon as Ruth, Warren and Domergue (see? Great names!). Goggins plays whiney and put-upon and untrustworthy in a nice balancing act that keep him edgy. Jackson is back displaying his uncanny ability to be the best actor on the planet to deliver Tarantino dialogue, and how great is it to see Kurt Russell back in a big role? More, please.

I saw “Star Wars: The Force Awakens”, which has a ton of script problems, and left with no emotion. I was un-touched by it. “The Hateful Eight” has problems as well – again, the stories get laid on with excess, character behavior can be questioned on a number of occasions (without giving up spoilers), but there’s something in QT’s filmmaking that had me, no matter how I may have strayed here and there, right in the palm of his hand at the end. Even if the writing is flawed, the characters are rich and vibrant and each one is INTEGRAL to the plot. Half the “Star Wars” cast had no arc and Poe Dameron could be removed entirely from the film and it would remain unchanged. Can’t say that about cast members of “The Hateful Eight”. Plus, there’s a big surprise in it, which is always satisfying. 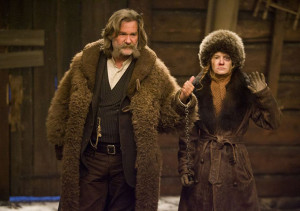 Tech elements are dynamite throughout, from Richardson’s cinematography to the legendary Ennio Morricone serving up a throwback score like the ones that made him famous. The “Roadshow” screenings of “The Hateful Eight” were especially satisfying, coming with a program, overture and intermission. Certainly worth paying for if you’re going to pay the same for 3D – there’s equal classic cinema value there. The locations are stark, yet have personality and the crazy, fur-covered layers of John Ruth’s costume will probably find their way to the floor of Comic-Con next summer.

So stay to the end, the payoff is worth it, even if the road there tests your patience. It’s only right that a film about a mixed bag of cretins ends up a mixed bag of results.