SHE’S HAVING A COW

The Duff
***
Review by Paul Preston
The Movie Guys

This week, I could take in the poorly-reviewed “Chappie” or “Unfinished Business”, or luke-warmly (is that a word?) received “The Second Best Exotic Marigold Hotel”, but the early buzz isn’t exactly selling me. Instead, I’d like to point your movie-going dollar towards a film that’s still out there, and deserves your buck – “The Duff”.

I’m not necessarily the target audience for teen movies. In fact, I’m not the target audience for teens in real life. I see some teens moping around on their cell phone at Starbucks, and I’m not hungering to see their lives represented in a movie. I’d rather see “Kingsman” again. However, the high schoolers in “The Duff” have had some justice done to them in that they live and interact within fairly realistic relationships that border on, ready for this? – Smart. 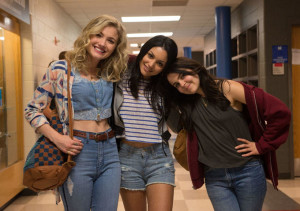 “Duff” is an acronym meaning “Designated Ugly Fat Friend”. A Duff is always floating in a circle of pretty, popular people and is often in that circle to play wingman or crying shoulder, but never meant to actually be popular on their own or get the boyfriend or girlfriend. Our story begins with Bianca, a perfectly happy high school senior whose world gets shaken up when she finds out she’s a Duff alongside her two best friends and she can’t. Handle it. This news is relayed via an unexpected friend, Wesley, who is the high school quarterback and friend of Bianca’s since childhood. Wes unassumingly calls her a Duff, but it sparks a revolution in Bianca to change her social status.

“The Duff” knows its ancestry – John Hughes movies – and the film wisely embraces the best qualities of that genre without ripping it off. High school class structure (“The Breakfast Club”), outrageous house parties (“Sixteen Candles”) and even a finale that’s right out of “Pretty In Pink” all show their face and the result is a lot of fun. But the anchor of the whole film is a hilarious and heartwarming (without pushing it) lead performance by Mae Whitman. Speaking of unassuming, Whitman has racked up well over a hundred film and TV performances without crossing into major star status. But she pulled off one of the finest child actor moments of all time in “Hope Floats” (“I WANT MY DADDY!!”) and if you’re not sold, she is Ann Veal on “Arrested Development” (“Her?”). 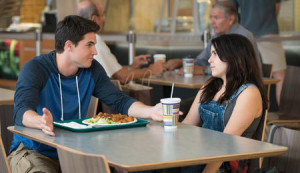 Around Whitman are Robbie Amell as Wes, who exudes a great sense of humor and Tom Cruise smile. He’s apparently on “The Flash”, which is on The CW, a thing I’ve heard of. Bella Thorne as a nice career ahead of her as the comedic bitch if she wants it, but the other female actors are hit and miss. Bianca’s friends are a little stiff (perhaps as dull as an exceptionally pretty girl would be), but they benefit from the good writing, which draws them as real people whose kindness is surprising and refreshing. If anything, the adults are drawn a little broader, which doesn’t quite mesh, but do draw up some big laughs. 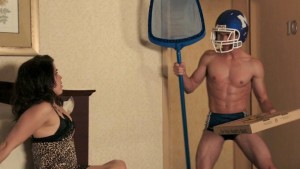 That being said, the direction is more in the vein of an outlandish Hughes movie like “Planes, Trains & Automobiles”, as opposed to “The Breakfast Club”. Visual effects and dream sequences enhance the characters feelings for fun effect and actually reminded me of “Better Off Dead”.

All these ‘80s movies are good company. “The Duff”, like its predecessors, wisely sidesteps traps other teen movies of the 2000s fall into. You can tell a movie has nothing if there’s an overload of swearing. I don’t wanna sound like an old fart with the language and all, but this film should get some love because where it could shock with dialogue, it instead gets clever. The other pothole averted is gross-out humor, another how-can-we-one-up-the-last-film trend that’s grown weary. None of that here, just a character you can really, really root for. Isn’t that all we need, Lloyd Dobler?

Who is your favorite fictional therapist?