Danny Boyle’s “Steve Jobs” is the second biopic of the Apple Computer founder in the past three years. But it’s not unlike something involved with Apple to have to be rebooted to operate correctly. 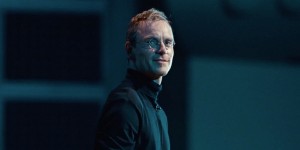 I’ll admit to never having seen 2013’s “Jobs”, featuring Ashton Kutcher in the lead role. That’s nothing new, Kutcher has appeared in twenty-four films and I’ve shown up for two of them (“The Guardian” and “Valentine’s Day”). I actually enjoyed his performance in both but I just…don’t…get out…the door when he appears in a project. Can’t explain it. So unlike the rest of the world, I won’t be judging Michael Fassbender’s performance as Jobs in the shadow of Kutcher’s. Man, that sentence was hard to type.

That’s enough Kutcher, let me cut to the chase – Danny Boyle shoot and edits the shit out of this film that is a blistering account of Jobs’ various roles in the computer world, told uniquely with powerhouse performances. It’s everything I love about film with every aspect of filmmaking operating on a high level.

Scriptwriter Aaron Sorkin has structured “Steve Jobs” in three acts, each act focusing on the launch of a new computer product (I had never even heard of the second product, Next Computers, and it turned out to be the most fascinating). Sorkin manages to seamlessly work every relationship of Jobs’ life and every facet of his personality into each of these moments in his career. It’s never muddled and it never stretches believability (and one big laugh late in the film comes from Jobs lamenting that EVERYONE shows up at one of these launches liquored up and ready to yell at him).

The Sorkin walk-and-talk is in full effect as Fassbender’s Steve Jobs finds himself meticulously busy with every launch as people trail him in his wake, vying to capitalize some of his time – his marketing director Joanna Hoffman (Kate Winslet), Apple computer co-creator Steve Wozniak (Seth Rogen), Apple’s CEO John Sculley (Jeff Daniels), as well as scrambling stage managers, programmers, a TIME Magazine reporter and Jobs’ estranged ex-girlfriend and daughter(?). 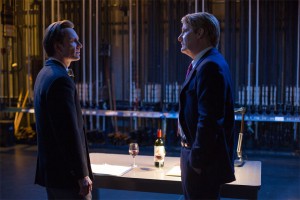 Reportedly, Boyle shot the three segments of the film in order with extended rehearsal sessions with the actors in between and that workflow pays off. The actors are all directly on target here. You can’t take your eyes off of Fassbender as he smartest-guy-in-the-rooms his way through each scene. Jeff Daniels is the best he’s been since the ‘80s, with a film script finally giving him a part as rich as he had each week on “The Newsroom” (no surprise it’s from Sorkin). Kate Winslet is predictably great in the position most of us would find ourselves in if we were involved with Jobs – trying to keep his genius on course and his humanity on point. And my love affair with Seth Rogen continues as he again wisely takes on a role not beyond his capacity as an actor and serves up a good performance (you probably wouldn’t expect stoner-comedy-guy to show up in a Boyle/Sorkin project, but no Day-Lewis antics are expected of him, and what is asked is delivered).

Boyle even goes so far as to coat the three sections of the film in three different filmmaking styles indicative of the era in which they take place (going from film grain to sharp digital) with the music also working on you in different ways. I hesitate to tell you that, ‘cause I don’t want you to look for it, but it’ll work on you regardless. 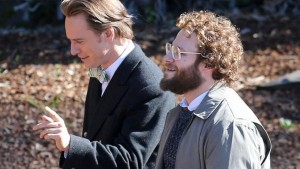 Boyle does offer up a gimmick or two and they’re not seamlessly sewn into the big picture. He uses projections on the walls around some of the characters that made me think I had flipped channels to “Natural Born Killers” for a moment, but there no doubting the energy Boyle infuses into every scene of this movie. It picks you up and carries you until the final frame.

You’ll need to exhale when it’s over.

With the fourth season of Wynonna Earp ending on Syfy, we want to reflect on just how much the women of the series impacted us. Click that link below for all the feels, Earpers!