From Paris with Jokes

Since the likes of “Beverly Hills Cop II”, Hollywood’s been falling into the trap now and then of delivering a good-looking movie comedy, but sacrificing laughs in the process. How much slicker was Tony Scott’s Axel Foley sequel than Martin Brest’s original “Beverly Hills Cop”? Much. It glistened with golden sunshine, the cinematography had noir shadows and the police station no longer looked like a police station in Beverly Hills, but more like S.H.I.E.L.D. headquarters that obviously had money pumped into the set design. Lost along the way was the charm and laughs of the original.

“Evan Almighty”, “Land of the Lost” and “Last Action Hero” are more examples of big summer comedies that spent money, but came up short, humor-wise. Paul, what’s your point? 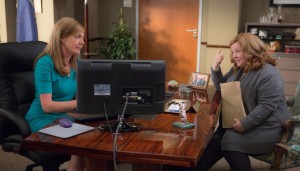 I’m happy to report that “Spy”, which combines great character comedy with a send-up of Bond movies, has a great look – exotic locations, glossy automobiles, gadgets and elaborate costumes – all essentials to give your movie the feel of a “Mission: Impossible” or “True Lies”, but the humor is IN TACT.

Paul Feig has quickly become the go-to guy for film comedies, after cutting his teeth on TV for years. He’s one of the great directors behind classic episodes of “Arrested Development” and “The Office” as well as being one of the creators and main writers of “Freaks and Geeks”, the breeding ground for some of today’s great comedy talent like Seth Rogen and Judd Apatow. As the director of “Bridesmaids” and “The Heat”, Feig has maximized the talents of the DeNiro-to-his-Scorsese Melissa McCarthy to star-making heights and built a brand of adult-language comedies that equal big box office. 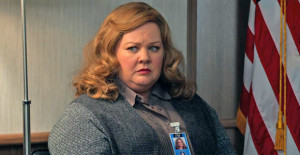 That roll continues with “Spy” as McCarthy (once again!) plays Susan Cooper, a CIA analyst who guides super-spy Bradley Fine (Jude Law) through missions from the Central Intelligence Agency offices, all the while longing for her own mission. Circumstances arise where she’s sent undercover (a couple of times) to help recover the NOC list that will out all the undercover spies across the world and eventually lead to an arms deal.

Few scenes fly by without the jokes coming fast and funny. There are too many comedies today with missed opportunities and Feig and McCarthy don’t let any of those moments pass without delivering something hilarious. Occasionally the jokes are repetitive (although the Jason Statham (as a rival spy) bit where he goes on and on about how badass he is never gets old), but the comedy never totally falters or tanks. It’s pretty consistent. 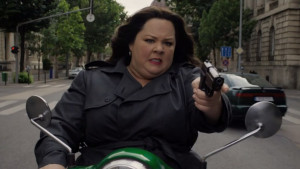 One plus to a goof on spy movies that also works for this film is that McCarthy is a good spy! She has skills, so the movie doesn’t labor its way through a story where our hero is really a foil to anything getting done. She moves the plot forward, and the laughs are gotten from her unfiltered approach.

I never thought I’d say this, but the best thing about the summer movies is Jason Statham. After a great turn as a total badass in “Furious 7”, Statham brilliantly sends up his badassery in “Spy”. Allison Janney is great in a supporting role as a CIA chief and Miranda Hart, who I’ve never really heard of before gets great laughs as a fellow analyst who traipses out in the field to help Susan. I definitely want to see more of Hart in the future. 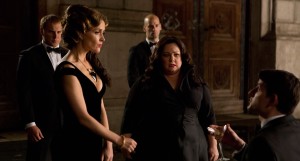 Most impressive in support is Rose Byrne as the film’s villain, who has mustered up a breathy, posh line delivery that’s unlike anything you’ve heard before. I didn’t think she quite clicked in “Neighbors”, but she was so funny in “Bridesmaids”, I was hoping she would return to comic form. She does and then some in this scene-stealing role. The dialogue between her and McCarthy, especially in an extended sequence on a plane, is priceless.

What a summer for females headlining comedies. McCarthy, Amy Schumer in the upcoming “Trainwreck” the girls of “Pitch Perfect 2” and sure, it was a dud, but “Hot Pursuit” even had ladies leading the comedy charge. There are NO male-led comedies, unless you count “Pixels”…maybe? Or “Ted 2”, whose star might actually be a special effect?

But McCarthy is out in front so far with a character you can really root for in the year’s funniest film.