BROUGHT TO YOU BY THE MEXICO BOARD OF TOURISM

You smell that? It’s awards season juuuuuust starting to sprinkle into your movieplex. This week, “Sicario”, the newest film from “Prisoners” director Denis Villeneuve expands to theaters nationwide after a limited run and if summer movies aren’t your thing, get to the multiplex now ‘cause this film ushers in the late-year crop of award contenders. 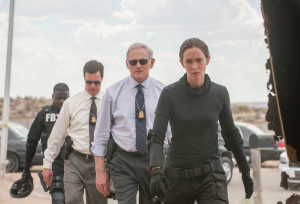 Emily Blunt plays Kate, an FBI agent tasked with raiding homes in Chandler, Arizona and surrounding towns. In the film’s harrowing opening sequence, she makes a gruesome discovery in one of the booby-trapped homes as the film kicks off with intensity and suspense. Kate is then asked to join a task force headed to the El Paso/Juarez border to shake up the drug war fight there. With the desire to get the men responsible for the horrible things she saw in Chandler, she signs up.

And this is where things get tricky. Who is this government-sanctioned group of roughnecks and what’s their plan? How does she fit in? She soon learns that the less she knows, the better and no one is in a hurry to fill her in. This begins a sprawling plot that never lets up the tension as Kate witnesses missions to take down the Mexican drug cartel that are by no means legal, but missions that are more or less successful, depending how you feel about heartbreaking collateral damage and no regard for protocol. The whatever-means-necessary-to-an-end debate is at the heart of “Sicario” and is delivered in richly-detailed military entanglements that look great down the lens of DP Roger Deakins. 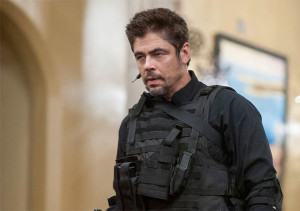 Josh Brolin, so good at playing younger Tommy Lee Jones in “Men in Black III”, pretty much plays a Tommy Lee Jones role here, as the seen-it-all op (DOD? CIA? Homeland Security?) who is quick to dispense orders and seems to have a grand time doing dangerous detail. Benicio del Toro is in his finest form in years as Alejandro, the shadowy-est of the shadowy-types engaged in this mission, who seems to have no business under the rules of engagement or legal requirements in The U.S. or Mexico to be doing what he’s doing, but it suits the needs of the United States government, so he’s aboard.

Telling this story through Kate’s eyes puts us in her position, trying to roll with the punches, but standing aghast when those punches include rampant gunfire exchange with locals. Blunt’s well cast as we’ve seen her kick ass (“Edge of Tomorrow”) so her fighting back against illegalities is authentic and well-written. This is not a stand-by-and-be-shocked female role, her struggle resonates. 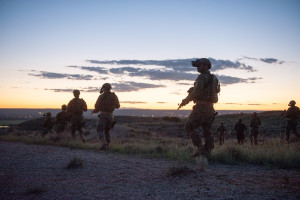 “Sicario” is also one of the best-looking films of the year. Could it FINALLY be time for Roger Deakins to get an Oscar? When he does, at least it won’t be the way actors get them – just handed their way for whatever movie they were recently in that was high-profile, but not their best. Deakins continually serves up the best work of his life, film after film. He manages to make the dreary desert landscape have beauty and danger in it, and he sets a mysterious atmosphere, combining night-vision, infrared, drone shots and more to make the gunfights complex and compelling.

“Sicario” is easily Villeneuve’s best film, and one of the best of the year.