This project seemed inevitable, as the breakout stars of the “Despicable Me” franchise, The Minions, get their own movie adventure. The ride at Universal Studios Hollywood isn’t called “Gru Mayhem”, for example. 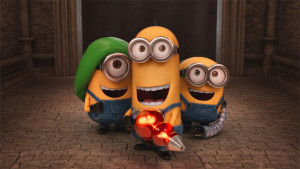 I will state at the top of this article, just so you know where I am coming from, that I just don’t get The Minions. They talk funny and look weird. So…that’s it? Is there a inside joke? No? Some sly nod to a film conceit or something? No? Are they poking fun at – NO, they just talk funny and look weird. Apparently, that’s enough for a LOT of people who’ve boosted this film to the top of the box office.

What we do get in “Minions” to flesh the main characters out a bit is backstory. Way, way, back. We see their evolution from single-cell organisms to the walking, blabbering yellow, bespectacled Tylenols we’ve become familiar with. And they know their purpose early – to find a master whose diabolical plans they can serve. This leads to a clever montage of failed attempts to gain a master where, like Forrest Gump, they find themselves at critical points or with critical characters in history, and they accidentally kill the master, sending the tribe into depression. 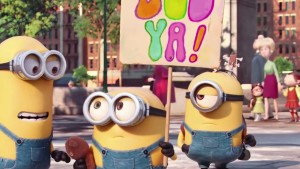 Leading them to…The Sixties? Yes, The Sixties just ‘cause (no expense was spared on the soundtrack, which includes the can’t-be-cheap Beatles, also The Who, The Doors and Rolling Stones). Three Minions make their way to New York City where they do bits just ‘cause, eventually landing in Orlando ‘cause of the plot! There’s a convention of dastardly villains going on – a sure-fire place to find a master.

The bad-guy of the moment is a girl. Sandra Bullock voices Scarlet Overkill, who is boasted as the biggest criminal on the planet, yet we don’t get much of her in action. Once The Minions join her, she wants to steal Queen Elizabeth’s crown – also no “blowing up the moon”, by comparison. 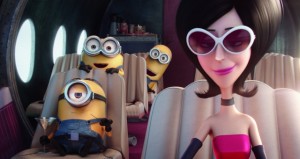 If it sounds like the plot meanders, that’s because it does! Eventually the steal-the-crown plot becomes a series of comedy bits with The Minions and Overkill gets lost in all of it. She’s not much of a presence either as a world-renowned baddie or thorn in The Minions’ side. And I haven’t even mentioned the family of thieves that pick up the hitchhiking Minions just ‘cause. And they’re voiced by Allison Janney (who should probably be Overkill) and Michael Keaton, both of whom’s talents are underutilized. That family does and means nothing to the story.

A special nod needs to go to co-director Pierre Coffin, who voices the Minions in all their fake language. He’s the star of the movie here with the most dialogue, even though The Minions don’t have any. You know what I mean, right? 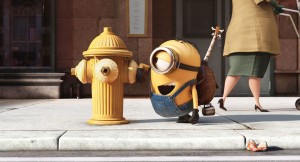 So far, I’ve been down on the plot, but if you like The Minions laughing and spouting their nonsense and farting and smacking each other in the face, you’re in business here. The whole ‘60s setting is definitely thrown in to keep the parents entertained, as a few well-placed references will only hit with the adults. If you’re high on animation now because of how much heart Pixar brought to “Inside Out”, don’t get too excited for “Minions”, which really has no heart as characters don’t learn lessons or fight for love or have an arc, really.

Outside of outstanding box office returns, Illumination isn’t really setting itself apart from Pixar, much in the same way DreamWorks Animation hasn’t. Quality-wise, they’re both still playing catch-up to the risks Pixar takes, even though that obviously hasn’t kept people away, “Minions” has currently grossed $216 million.