by Steve Scholz
The Movie Guys

Don’t talk, take my hand
And listen to my heartbeat
Listen…listen…listen….
–“Don’t Talk (Put Your Head on My Shoulder)” by The Beach Boys

Sound is funny thing. Music, words, noises, all have the power to soothe, startle, command attention, and move us to the deepest of emotions—sometimes in the same moment. And if you have voices in your head of any kind, those powerful sounds might lift you up and cripple you without warning. 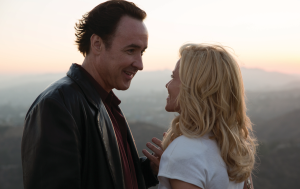 LOVE & MERCY is, above all, a movie meant for the movie theater. It’s an unvarnished look at Brian Wilson’s life and the suffering behind his music. As I watched it in a place with a top­notch audio system, I recognized how important sound is in telling the story of what Brian hears and sees.

The film’s parallel storylines feature a younger Brian (Paul Dano) and a more modern Brian (John Cusack). They cover the 1960s when The Beach Boys released the album Pet Sounds and the single “Good Vibrations,” and the late 1980s when a car saleswoman named Melinda (Elizabeth Banks) enters Wilson’s life, who’s being handled by his therapist Dr. Eugene Landy (Paul Giamatti). As with any biopic, we see the ups and downs of Brian, his family, and others around him. But what could’ve been over-­the-­top drama is instead down-­to-­earth storytelling as director Bill Pohlad sincerely conveys the world surrounding a man who’s own anxiety became his world. 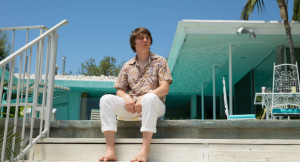 Paul Dano masterfully captures the complex, boyish Brian, who had to grow up in the public eye thanks to his demanding manager­/father Murray, but who was more at home in the recording studio creating what he loved. Cusack also gives a very strong performance as the struggling, older Wilson under the watchful eye of Landy, as Melinda’s interest in and concern for him becomes a threat to Landy’s plans. And when Cusack reveals Brian’s unfiltered honesty to Melinda, the cruelest moments in life (his brother’s drowning, his own poor parenting, his lack of contact with his family because of Dr. Landy) seem almost unreal and too depressing for her and for us. Yet we’re watching a man for whom “tortured genius” isn’t tossed around lightly.

As a bonus, if you are a diehard Beach Boys fan, you’ll find moments of sweet recognition and playfulness, especially in the studio. If you haven’t known the band that well, those same moments may seem wild and fantastic, yet genuine. They play side­-by-­side with Melinda and Brian’s budding romance, and the steps she takes to save him and herself. Transitions between both are smooth, and the pacing and wonderful cinematography makes everything flow. 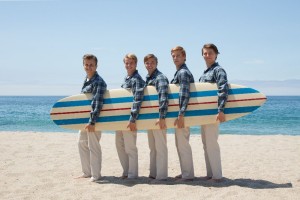 And the sounds! The glorious music from the Pet Sounds sessions as studio musicians bring to life what Brian’s only heard in his head. The moving scenes of Brian singing at a piano, sharing a new song he just wrote and seeking approval from anyone who’d listen. The beautiful unease of hearing everything Brian hears in his own head, and heart, and his one good ear.

Go see this film. Listen to it. Invest in that upper­-end sonic experience where you can. And stay until the very end. Trust me. It’s the sound thing to do.