Home » Movies » Reviews » Movie Review – KRAMPUS – What the Hell Is Wrong with Germans?!?

Movie Review – KRAMPUS – What the Hell Is Wrong with Germans?!?

WHAT THE HELL IS WRONG WITH GERMANS?

You know Dasher and Dancer and Prancer and Vixen…but you’ve probably never heard of Krampus. If you’re German, maybe you have, as Krampus is, according to Germanic lore, the opposite of Santa Claus, showing up on Christmas Eve to punish all those who…have it coming. 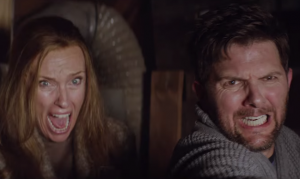 As you might imagine, a film called “Krampus” begins with these terrible people and mines a lot of laughs out of their anti-holiday behavior. Toni Collette plays the level-headed mom inviting the extended family over for Christmas, and they are a ripe collection of mutants from the fifth circle of hell – Dave Koechner plays the classic dumb guy with more confidence than an insanely stupid person should have. His kids have inherited that ignorance, and the aunt who visits is the most horrible human being of all time.

The only human that seems to have hope and be remotely pleasant is Collette’s son Max, played by Emjay Anthony. But when even he gives up on the holidays being remotely pleasant, Krampus is summoned to wreak havoc on the suburbs. 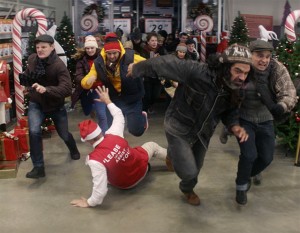 This behavior unbecoming of Christmas isn’t just relegated to one family. The opens with a telling Black Friday sales floor that is all the carnage you’d expect from shallow consumers. The film flashes between two tones, both present in the trailer – comedy and horror. A nice blend of the two would be welcome – let’s have some fun being scared. But unfortunately “Krampus” falters at the end and never delivers the knockout punch in either genre.

First of all – not enough Krampus. He’s kept in the shadows in the trailer to give the right amount of mystery, and once we’re in the film, that obscurity remains until the end, relying on, instead, Krampus’ minions to do the scaring, to varying levels of effect. Mostly, a “Gremlins”-like mood is set as Krampus’s evil gingerbread men, toys and elves set out to gleefully rid the world of the misery of awful people. I can get behind that. 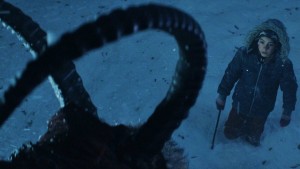 The film continues to ask you to play along with fun mayhem while killing kids early and often. This is a lot to ask of your audience, but I’m willing to go with anything as long as the payoff is substantial. Sadly, “Krampus” eventual full-screen arrival on the scene, though very well executed, leads to a series of false endings to the film, none of which support well what’s come before.

What’s happening to our messed-up family in “Krampus” is explained rather late in the film by the Grandmother, who has lived through all this before, but for some reason decides to chime in about it all about two-thirds of the way through the movie. Unfortunately, the entire finale of the movie betrays the set-up of the lore of Krampus. I can’t give too much away about what happens in the end, but it lapses into sappy film convention. For a film that hung its hat on violent chaos and in-your-face comedy, it employs lame routine horror movie tropes to wrap things up.

In the end, a stellar opening, an inventive animated segment and good actors coupled with a bad ending makes “Krampus” a mixed bag of presents.