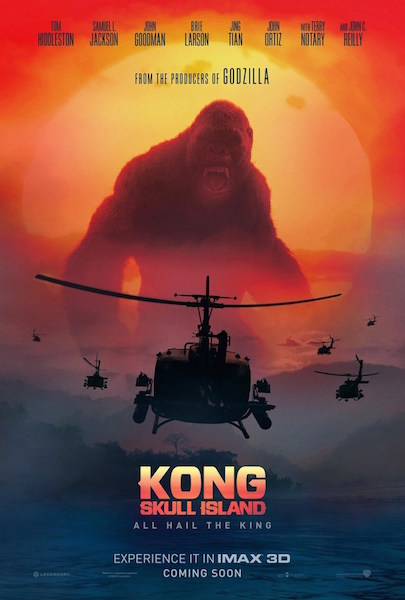 I guess twelve years is long enough for a franchise to go nowadays before it gets picked up and churned out again. Marvel only let The Hulk fester for five years between Ang Lee and Louis Letterier’s different iterations of the radiated humanoid. The result was a marked upgrade and a decent entry into the newly-launched Marvel Cinematic Universe. Kong: Skull Island is Warner Brothers and Legendary Entertainment’s attempt to launch it’s own universe – cinematic monsters. I’ll just say it’s no Iron Man.

Skull Island, as you may remember from every other Kong movie, is the mythical island of misfit monsters – giant spiders, huge snake-like reptiles, flying pterodactyl-type death from above and more. In the middle of it all is Skull Island’s king – Kong, a giant ape that can never catch a break from being tortured by these creatures and by near-human feelings that make him do things like protect and care for people. The newest people coming into his world, however, are up to no good.

John Goodman and Corey Hawkins play D.C. opportunists who wrangle a team of mercenaries with the goal of mapping the secluded island for life forms. Along with the mercenaries, led by Samuel L. Jackson, are a photographer (Brie Larson) and a tracker (Tom Hiddleston). Once on the island, the crew comes across an island refugee played by John C. Reilly. John Goodman continues a string of great performances (Trumbo, 10 Cloverfield Lane) in this, balancing authority and shiftiness well (his motives for coming to the island may be more than he first admits). But the rest of the cast is a bit lost. Larson is decent, but rather bland (perhaps it’s an underwritten role). Hiddleston is constantly posing like someone told him he had to be an action hero. “Putting on” the character of an action hero doesn’t sit on him well. He’s much better as Loki, where it seems to come naturally. And John C. Reilly is in a totally different movie. Get Out had a lot of comedy in it, but it emanated from the truthful moments of the characters, whereas Reilly’s goofiness seems to be a calculated, disingenuous attempt to entertain…with shoddy results.

Kong himself is the best actor, and yet the humanism he exhibited in Peter Jackson’s 2005 King Kong isn’t quite as sharp here (most likely the result of Weta and Andy Serkis not being involved). ILM makes a fine Kong, but he always seemed like a special effect, where I thought Jackson’s Kong seemed more lived-in, more of the world of the actors. However, director Jordan Vogt-Roberts frames some excellent moments in the movie, many you’ve probably seen in the trailers and poster – Kong’s face coming out of a fiery explosion to stare down Samuel L. Jackson, a group of helicopters facing Kong in the haze of a sunrise. I particularly like one shot where a helicopter gets picked off the ground by Kong and he shakes the inhabitants out of it, but the whole shot is done from a POV inside the copter.

Unfortunately, much of the rest of the film isn’t that well made. It’s another in a string of releases lately that’s in some sort of hurry. Scenes link together in such a rush to get what’s next, they end up being awkwardly staged or they lose critical breathing room to establish a credible pace…or both. The result is an impactless series of action sequences. The camaraderie between the mercs is straight out of the army guy playbook 101 – this guy’s gotta get home, this guy’s the vet, etc. – here’s a movie trope that’s dying for an update.

Points to the movie for setting the story in the Vietnam era. The metaphor for American invasion and pissing off the natives isn’t lost, but the effect of the whole movie doesn’t extend beyond the end credits, as much as they’d like me to get invested in a franchise.