Movie Review – INSIDE OUT

It’s quite a testament to the consistent quality Pixar has brought to films for twenty years that even though they’ve had some missteps recently, the fact that they NAIL IT once again with their newest release, “Inside Out”, is no real surprise.

Think of supposed missteps – “Monsters University”, which still grossed $270 million (and was hilarious) and “Brave”, which won AN OSCAR. These are their lesser efforts. But yes, this article will be another place where we don’t even talk about “Cars 2”. 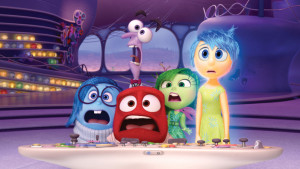 The talent behind “Inside Out” is a greatest hits of Pixar minds, executive produced by John Lasseter and Andrew Stanton and directed by the filmmaker who made my favorite Pixar movie, “Up”, Pete Docter. And unlike a sequel or formulaic bend on a princess tale, the story here is wholly original. Even if we’ve seen the voices in our head get the personification treatment, never has it been laid out with such ingenuity and emotional complexity.

When young Riley is born, we get a glimpse inside her head as her first emotion, Joy (voiced by Amy Poehler) is also born. Soon, other emotions join Joy in “The Headquarters” of Riley’s mind and heart – Sadness (Phyllis Smith), Disgust (Mindy Kaling), Fear (Bill Hader) and Anger (the perfectly cast Lewis Black). First on the scene, Joy feels compelled to keep Riley cheerful her whole life, but when a move from Minnesota to San Francisco distances her from what previously made her happy (friends, sports, more family time), Joy’s job becomes a struggle.

The layout of how emotions and memories work in tandem is an intricate description with various “islands” that support what’s important in Riley’s world, massive catalogs of memories wherein there’s a Train of Thought, an abstract thought chamber and more. All the colorful locations and characters are vividly described and unique. It’s yet another subculture not previously explored that Pixar successfully jumps into with full storytelling force.

Voice work is excellent all ‘round, with tour-de-force Amy Poehler really driving things as Joy. She’s a real root-able character, who, like Woody in “Toy Story”, is relentlessly devoted to her child, going to any length necessary to do what’s best for her. In an unfair bit of casting, they’ve cast a walking, talking animated character, Richard Kind, to voice an animated character – Bing Bong, a hilariously unique imaginary friend wandering the halls of Riley’s imagination. 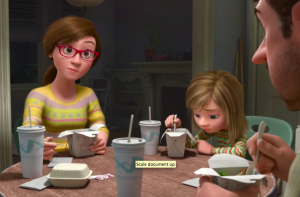 The people in “Inside Out” (Riley, her teacher, parents and friends) look as they have in Pixar movies, but the emotional world gets brought to life in gloriously colorful and otherworldly detail, and Docter keeps the pace rambunctious throughout. Michael Giacchino once again brings a whimsical score, opting for jazzy over symphonic where appropriate.

Like “Up” before it, Pixar is delivering something you’ve never seen before, and when they’re on, they do it (corralling in a truckload of assets and ideas) as if it’s effortless. Don’t miss this return to form doing what Pixar does best – exploring and celebrating what it means to be human.