The war has changed, but the toll on the soldier remains the same in “Good Kill”, the latest (and most indie-feel) film from Andrew Niccol.

Ethan Hawke plays Major Tom Egan, an Air Force pilot who has racked up countless hours and miles flying F-16s in dangerous missions in Iraq. Now, his missions consist of flying drones via remote joystick in what amounts to an industrial shipping container on a desert base just outside Las Vegas. In this new style of warfare where combatants are 7,000 miles apart, Egan gets to go home to his wife and kids at the end of the day. Seems like a perk worth treasuring, but the pent-up frustration of not flying as he was trained to fly (in a jet!) and killing targets with routine, stealthy accuracy spills over into his home life, with unfortunate consequences. 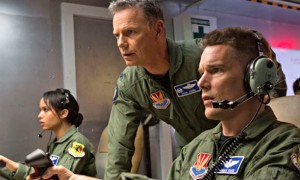 This idea that war is different now, that we don’t face armies any longer and we can attack an enemy from 10,000 feet in the air with robots isn’t new, but the deep dive into to lifestyle of those involved is fresh and complicated. The one term thrown away by Egan’s commanding officer, Lt. Colonel Johns (the always solid Bruce Greenwood), in his elaborate speech given to new recruits is that his wing of the military is now nicknamed “The Chair Force”.

The film contends that the Air Force is actively seeking out young soldiers for their video gaming skills, and the days of “Top Gun” piloting are over. “Good Kill” is our first real glimpse on screen of what the drone war is like, procedurally. The patience and pressure is constant as targets are sought out and verified and pains are taken to avoid collateral damage. But when Egan and Johns start getting orders directly from the C.I.A., the mission is muddled, and Egan cannot question it or remove himself. 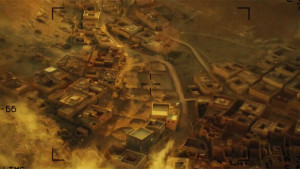 Hey, you wanna make a war movie on the cheap? This is how you do it. There are no sprawling war epic set pieces in “Good Kill”. The most elaborate locations are on the video screen Egan is staring at (Morocco fills in, as it usually does, for targets in Afghanistan and Yemen). The sweatbox where Egan and Johns play out their duties is appropriately claustrophobic and much drama is gotten out of the C.I.A.’s decisive and unwavering tone on incoming phone calls.

Hawke is quite good in this. That’s a phrase I’ve said a lot lately. Hawke is a remarkable performer in that he was a good young actor in films like “Dead Poets Society” and “Before Sunrise” and has stayed the course with quality project choices, aligning himself with good directors and somehow maintaining relevance without getting involved with hollow blockbusters. His two Oscar nominations for Best Supporting Actor prove his talent hasn’t waned one bit and in “Good Kill”, he’s effective as a ticking time bomb of a man, simmering with dissatisfaction at home and on duty. 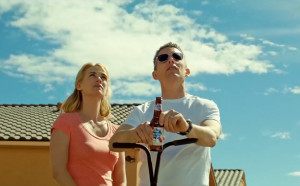 Also supporting Hawke besides Bruce Greenwood is January Jones, showing ample range as Hawke’s frustrated wife, and Zoe Kravitz, effective as a younger drone pilot fed up with her cohorts, yet enamored with Egan. Not much has been asked of Kravitz in the movies until now, and she steps up quite nicely. I would be remiss if I neglected to mention the excellent voice work of Peter Coyote as the C.I.A. agent delivering missions to the drone pilots. He exudes power and authority with just his voice that resonates. You get that you don’t want to cross him.

Andrew Niccol is most known for his science fiction films like “Gattaca” and SimOne”, but he made another war film, “Lord of War” in 2005. This story is right up Niccol’s alley, combining examining more soldier stories and infusing them with the hi-tech of drone combat. And Niccol keeps it simple. The script doesn’t stray off on too many unnecessary subplots and the camerawork is efficient, throwing in effective high-angle (drone-angle) shots in Nevada to minimize the people it’s capturing. 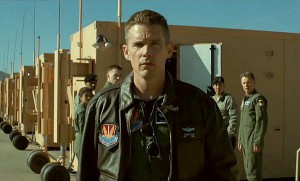 My big gripe would be the finale. It was emotionally satisfying (for Egan, too), but I have to believe there will be serious consequences that follow him after the credits roll. Consequences that make you re-examine how wise his choices may have been after all.

“Good Kill” (what you say to confirm a successful drone targeting) opens May 15th and is bound to get lost in a sea of “Mad Max” and “Pitch Perfect”. Where this film will not succeed in box office numbers, it succeeds as valuable summer counterprogramming.