Home » Movies » Movie Review – GET OUT

Movie Review – GET OUT 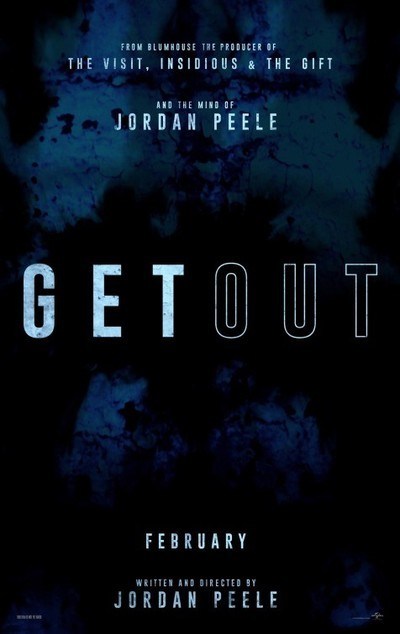 There’s a reason Jordan Peele’s feature film directorial debut Get Out has a near-unanimous critic rating – it’s entertaining as hell! If you like a smart thriller, Peele’s script is surprisingly dense with details that all add up to something. If you like to just sit back and enjoy the jolts of a horror/thriller, Get Out certainly delivers authentic mystery in its first half, and tension-filled suspense in its second. If you come to this ‘cause you love Key & Peele, you also won’t be disappointed because there are laughs, and they’re so smoothly integrated into the story, they never seem tacked on. This is a damn good film.

Daniel Kaluuya plays a young black man, Chris, in an interracial relationship with a white woman, Rose (Allison Williams). Rose is taking Chris to her parents’ home in upstate NY to meet the folks, Dean and Missy, who haven’t been told he’s black. Peele quickly and briskly takes the uncomfortability of the fear of exclusion, the condescension of class struggle and the never-ending problem of racism and infuses a shot of the original.

There’s something going on in the ‘burbs. Chris can sense all its inhabitants examining him closely. The black workers at Rose’s folks’ home are odd and eventually Missy’s determination to hypnotize Chris seems more and more suspicious (it first is offered to help him quite smoking).

The best part about Get Out is that all the above is used to make incisive social commentary about the inclusionary nature of liberals and the oft-explored theme of what’s brimming under the pristine shine of the suburbs and YET, the film never forgets that it’s a great thriller. The comment isn’t heavy-handed. Further driving that point home is the movie’s comedy, which mostly comes in the form of Chris’ friend Rod, a TSA employee who takes it upon himself to explore Chris’ situation further, all detective-like. Lilrel Howery plays Rod with welcome comedic energy, but never goes over the top. He truthfully loves his friend and has suspicions, and it all adds up to great comedy. Plus, he has the last lines in the film which are instant classic.

The rest of the supporting cast are a wealth of talent at a bargain price. Bradley Whitford is inspired casting as Rose’s progressive father after all those years at left-leaning The West Wing. Catherine Keener as Missy is also very good and the great Stephen Root continues to find there’s no role he can’t make creepy.

This is another rollout from the remarkable Blumhouse Productions machine, who seem to crank out at least one major horror or thriller film per month. And there seems to be a hierarchy developing within their releases, too. All of their films are potential money-makers, given their low budgets. Unfriended, for example, made $32 Million. That would not be a hit in the Marvel universe. But at a cost of $1 Million, it’s a smash. According to the numbers at BoxOfficeMojo.com, Jem and the Holograms looks to be the only bomb in Jason Blum’s catalog, but that yields two thoughts – he’s got a genre worth sticking to and nobody cared about Jem and the Holograms, because he still turned that film around for $5 Million.

So, this hierarchy. Given this tremendous output, Blumhouse has a great deal of by-the-numbers horror films – things going bump in the night, found footage, possession, ghost stories, etc. Movies like Incarnate, Sinister and The Darkness fit in that first tier. The first tier holds all of Blumhouse’s trashier efforts, too. But there’s a second tier of movies developing with more stately filmmaking and production value. The second tier films have complicated relationships, a psychological angle and lot more to say. They usually have provocative directorial choices, too, like M. Night Shyamalan and Joel Edgerton. Keep these ones on your radar, they transcend the genre and include The Gift, Split and now Get Out.

This week's #WomanCrushWednesday goes to @SnowpiercerTV's Melanie Cavill! She's made her fair share of mistakes along the way, but her quest for redemption is admirable.