REPORTS OF WILL SMITH’S DEATH ARE GREATLY EXAGGERATED

The exploits of con men crossing and double-crossing each other are told through the filter of beautiful people in “Focus”, the third directorial effort of Glenn Ficarra and John Requa of “Crazy Stupid Love”. 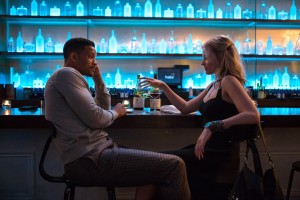 The trailer, featuring an absolutely stunning Margot Robbie and statuesque Will Smith, would lead a viewer like myself to think that the film is a serious delve into the slick yet dangerous world of hustlers. However, the result is actually a lot more fun than that. Sure, there’s peril, and there should be, but the charisma on display certainly makes up for the lack thereof shown in Smith’s “After Earth”.

Let’s talk about “After Earth” for a second. Why are people so quick to announce the end of Will Smith’s reign as a movie star? One slip-up? Granted, it’s an M. Night Shyamalan slip-up, which often can feel like multiple slip-ups in one, but even though the recent “Seven Pounds” was a maudlin drag, the charming “Men in Black 5” made close to $200 million, and before “Seven Pounds”, “Hancock” and “I Am Legend” made well over that each. Smith’s not on a Nicolas Cage-esque implosion. “After Earth” sucked, that’s all. But so did “The Last Airbender”, “The Happening” and “Lady in the Water” – Smith should’ve known better. 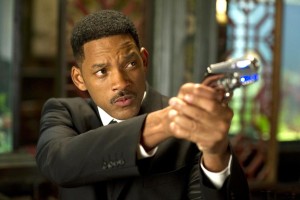 If anything hurt Smith’s career, it was the four years off between “Seven Pounds” and “MIB3”. But he returns in “Focus” with a glimpse of what I believe we’re going to get from now on in Will Smith, a confident movie star with less to prove. There’s no more catch phrases or jumping around yelling “That’s what I’m talking about!”. Smith’s groove in “Focus”, as Nicky Spurgeon, is of the coolest variety, seemingly not even KNOWING how to say or do the wrong thing. He is nowmore than ever, a confidence man.

Nicky’s known nothing but the life of a con artist since he first started turning schemes as a younger man with his father. Now his tricks are extremely polished and involve entire teams to pull of the elaborate ideas he has. Enter the impossibly beautiful Jess, played by walking priceless piece of art Margot Robbie. Nicky lets Jess into his circle, and into his heart, which, of course, can be deadly for a scammer. 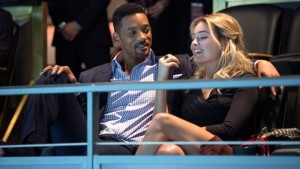 What ensues really can’t be detailed here as the one-ups come fast and furious as Nickys cons take them to The Super Bowl (or fake Super Bowl without NFL teams) and Buenos Aires into the world of Indy Car racing. Like the most entertaining scripts, just when you think you’re ahead of it, you’re wrong. Things are never as they seem. So then you say to yourself, “Well, I’m going to be thinking ahead of the film now ‘cause I’m fully aware that things are never as they seem”. Then – you’re wrong again.

One could question the rather large plot moments you’re asked to buy into. A LOT has to go JUST SO for everything to work out in some of these cons. I don’t know that I’d make a plan that reliant on such specific events to win the day, but then I’d be crapping on “Ocean’s Eleven” and “The Sting”, and you’re better off just rolling with it. Ficarra and Requa provide enough stylish filmmaking and the leads exude enough sexy style and magnetism to make rolling with it rather easy (did I mention they’re beautiful?). 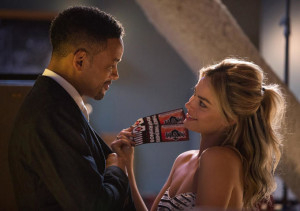 Also, half way through the movie, you’re roundhouse kicked with a plot device. This time jump has turned some people off, but stay with it. After this device, there is a great deal of relationship scenes to where they overrun all the cool scheming that populated the first half of the film, giving the pace a bit of a lull with some repetitive scenes. But again, stay with it ‘cause it all comes around and you will fail once again to get ahead of the film, and you’ll be happy you did.