Far from the Madding Crown

Opening alongside “The Avengers: Age of Ultron” this weekend is the epitome of counter-programming, “Far From the Madding Crowd”, a lush, Victorian era film based on the popular Thomas Hardy novel about a love triangle that evolves into a love square. Readers take note – this is not the Tom Hardy in “The Dark Knight Rises”, who played Bane, this Hardy is a British realist poet from the 19th Century. Turns out that’s a big difference. 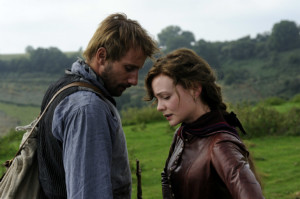 Carey Mulligan stars as the film’s protagonist, the vibrantly independent Bathsheba Everdene. Bathsheba turns down a proposal from modest sheep farmer Gabriel and ends up inheriting a farm where Gabriel winds up as the main shepherd. Bathsheba claims to want a suitor who can tame her (Mulligan might make a good Catwoman someday).

Bathsheba has a strong head about her that reminds me of Black Widow, who outsmarts her opponents long before she dismantles them with fighting technique. She and Hawkeye are so close, you have to wonder if there is any sort of romantic entanglement in the wings for those two. But Widow’s screen time in the Marvel universe is so jam-packed with villain-fighting, no moment can be spared to explore such a thing. 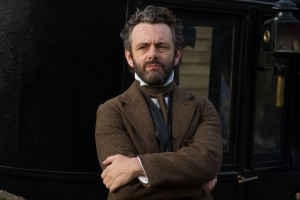 But that’s all that goes on in “Far From the Madding Crowd”, as Bathsheba soon catches the eye of William Boldwood, a wealthy neighbor who also proposes (people are very quick to do this in the Victorian era). Again, Bathsheba turns down her suitor, despite his Bruce Wayne-esque mansion.

Money can’t seem to buy Boldwood everything, which would seem to be a different story than the one they were telling over at “The Avengers”, where billionaire Playboy Tony Stark was on quite the winning streak – money, girlfriend, status, heroism. Then the PTSD set in, and after losing his ocean-side home in “Iron Man 3”, Stark Tower in New York City seems as if it’ll be the new home for The Avengers and Tony will use his great wealth to fashion a robot peace-keeping force in “Age of Ultron”. But I have a feeling his good luck streak won’t pick up again as The Avengers may have to match wits and strength with an artificial intelligence out of control. 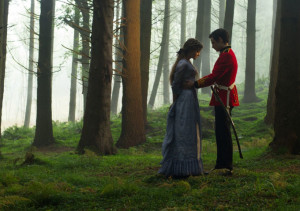 Also out of control is Sgt. Troy, a jilted, reckless man who proposes to Bathsheba and this time SHE SAYS YES! To this guy? It was quite a shock (like, The Mandarin isn’t real kind of a shock) to see this woman who has spent the first third of the film being built up as a notable person of independence say yes to a guy who’s come out of nowhere who we immediately don’t like. That quick-trigger response is out of character and a bit of a betrayal to what’s been set up to that point in the film. You’d never see that kind of 180-degree change in demeanor out of Steve Rogers.

Speakinawhich, how good is Chris Evans at playing this part, now that he’s four movies in? When he was first cast, I thought to myself, “The Human Torch guy? As Captain America? He’ll be too smarmy”. But he continues to grow and nail it more and more with each film. I also thought that a character so righteous and bordering on the square in the modern world might come off boring, but the combination of Evans’ performance coupled with Christopher Markus, Stephen McFeely and Joss Whedon’s clever writing, I can’t get enough of Rogers, who now also has great interplay with the other Avengers to boot. 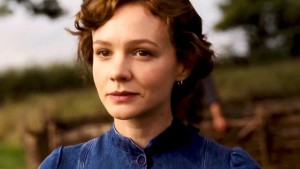 Oh…uh…”Far From the Madding Crowd”. Let me also say that I always thought it was “Far Form the MaddENING Crowd”. “Madding”, it turns out, means “frenzied”, which I kind of thought “maddening” meant, although that sounds more like a growing frenzy. So…there’s that….

How great is Mark Ruffalo as Banner? We waited three movies to get it right, but he’s the perfect combination of uncomfortable coupled with unpredictable (and a dash of genius). Here’s why, sadly, we may not get another stand-alone Hulk movie for a while. Universal still has its fingers in the rights, so if current Marvel parent company Disney wanted to make a Hulk film, they’d be kicking out checks to Universal, who made “Hulk” and “The Incredible Hulk”. I don’t see Disney wanting to share profits on anything ever, so don’t hold your breath. All the more reason to get excited for more Avengers movies, where The Hulk can be part of the bigger picture. The Marvel cinematic universe under Kevin Feige’s lead has had the most success in presenting the character anyway, including that brilliant revelation that Banner…is always angry.

So…everything looks gorgeous in “Far From the Madding Crowd”. Seriously, top notch production value throughout. And good performances, really. Michael Sheen is always good, and ends up bringing real pathos to Boldwood, and chances are you’ll fall in love with the good nature and good looks of Matthias Schoenaerts as Gabriel. I just wish Bathsheba didn’t make such stupid decisions in the middle of the movie for NO REASON. Then you have to slog through the rest of the film as it tries to pare down what was no doubt an expansive novel into a few scenes that do away with the characters and plot points that will get us to an inevitable ending.

But if there’s anyone I trust to take a huge plot and a large amount of characters and deliver them in a palatable, entertaining fashion…it’s Joss Whedon.

EDITOR’S NOTE: Nice bit of trivia – It is from Far from the Madding Crowd that Author Suzanne Collins got the name “Everdene” for The Hunger Games hero – Katniss Everdeen