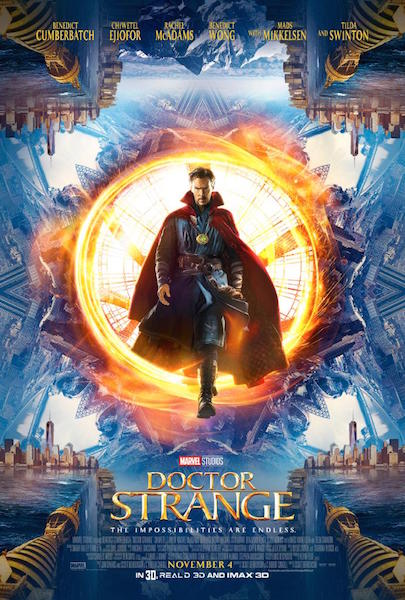 JUST WHAT THE DOCTOR ORDERED

As a kid, I preferred Marvel over DC. My favorites were the Fantastic Four, Captain America, and the Hulk – only one has had a successful theatrical franchise. I was never a big fan of the Iron Man and Thor comic books, but was more than pleasantly surprised at the movie versions. I can say the same about Marvel’s Doctor Strange, with one caviat. Doctor Strange could be the best origin movie yet in the Marvel universe and multiverse. Writer/director Scott Derrickson (Sinister, The Exorcism of Emily Rose) and his team of writers have infused a sensational mix of awe and wonder with a delightful sense of humor. Add to it the talents of Benedict Cumberbatch, Tilda Swinton, Mads Mikkelsen, and an equally strong supporting cast along with eye-popping, near dizzying special effects, and you have a first class Marvel production that may be the pedigree of the bunch. 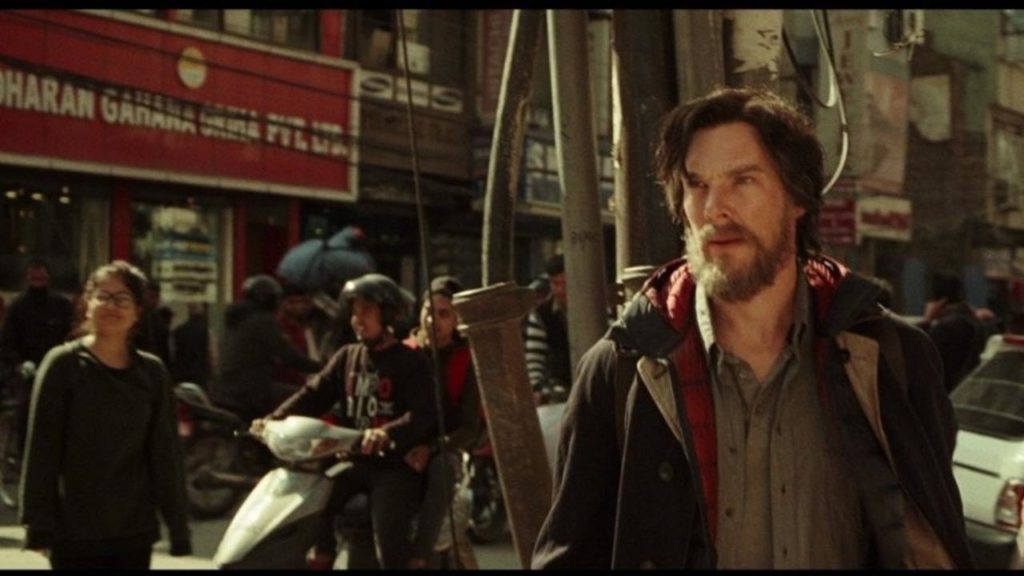 From the impressive new Marvel Studios opening to the fun second end of the film (not including the tail end credit sequence promising Strange’s return) the journey of Doctor Strange is a very different Marvel movie. We are jarred into a world of mysticism and magic in the Far East. A battle is about to begin, but the split between good and evil is not black and white. And so goes our near anti-hero, Doctor Stephen Strange.

Benedict Cumberbatch embodies the character from the comics in every way. He may be the best bit of casting since Robert Downey, Jr. was picked to play Tony Stark/Iron Man. Doctor Strange is a brilliant surgeon who is drawn to celebrity status like a moth to a flame. He is off-putting, arrogant, and single because he’s too into himself to have the time for anyone else. 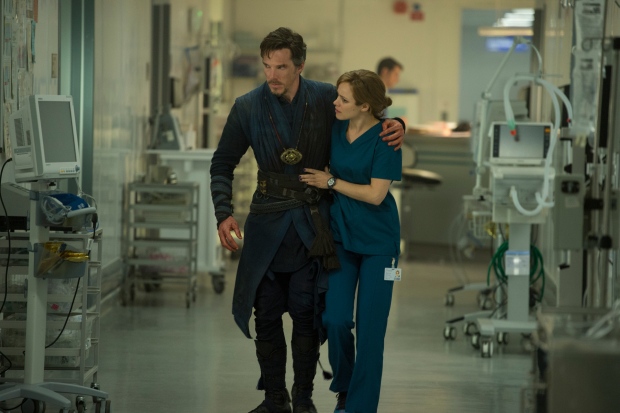 He does have an amicable relationship with one emergency room doctor, Christine Palmer, played with the warmth that Rachel McAdams can easily muster. She has obviously attempted to be his grounding rod but to no avail. Strange has put himself on a pedestal that may be beyond the heavens. But it all comes crashing down with one horrifying accident, due to his invincibility complex.

Strange’s struggle to regain his physicality and his ego is a devastating one, even for this a-hole. His beliefs eventually become challenged when he hears of a miraculous recovery process that was found in the Far East. Strange spends the last of his money to find a cure only to be disappointed with tales of mystics and promises of magic and mantras. Doctor Stephen Strange is a man who only believes what he can see and scoffs at anything he may not comprehend. 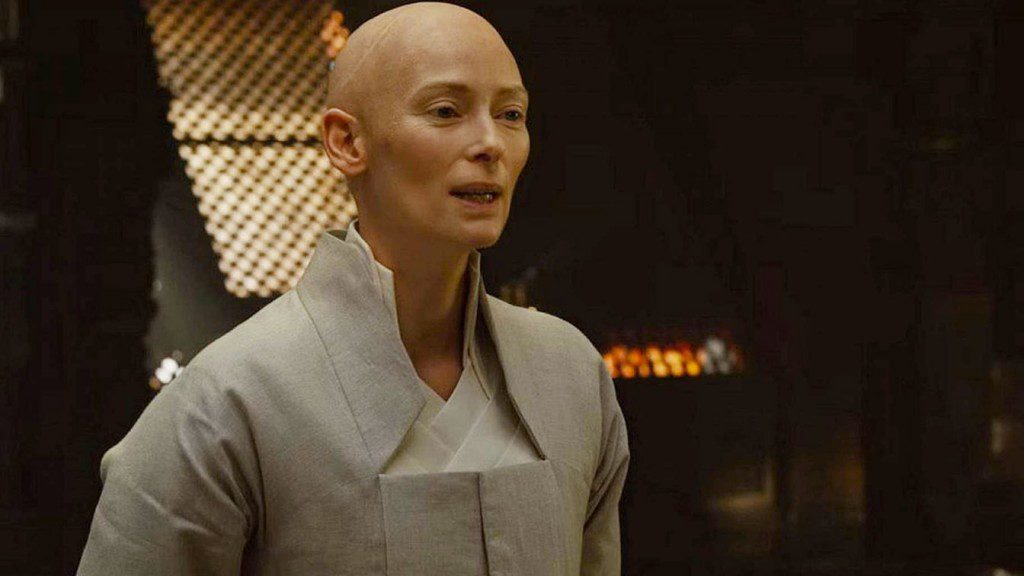 Once confronted by The Ancient One, Strange is subjected to an astral trip like we have never experienced. Warning: this is not the movie you see while under the influence of a hallucinogenic, as many did in the ’60s with 2001: A Space Odyssey). This is where Strange’s odyssey kicks into high gear, and so does Tilda Swinton as The Ancient One. She pulls off the wise and all-knowing like that little green muppet of a soothe sayer, Yoda. Swinton conveys more with a slight smile and a twinkle in the eye than most actors of her generation. She is convincing, and it may be all through her that everything becomes plausible even when we’re witnessing the implausible.

Throughout Strange’s training, we witness something even more miraculous, a reinvigorating of his soul. The cocky SOB actually becomes more down-to-earth. It’s the gradual change that makes his character so endearing, even though the cockiness could be the last thing he hangs onto, and we’re all the more entertained by it. 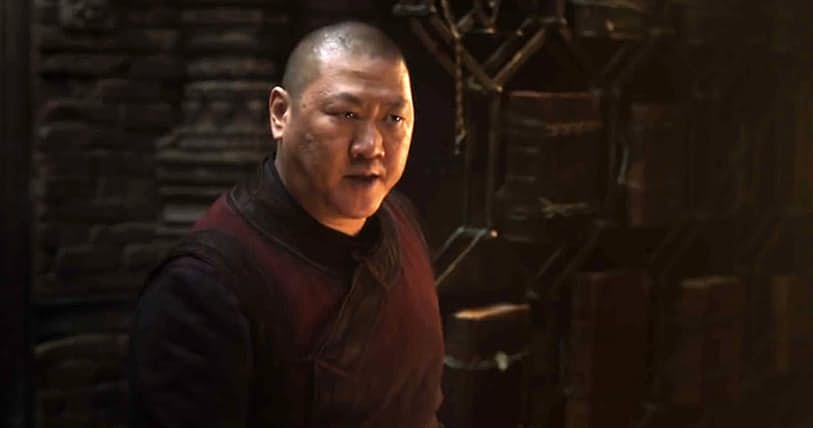 Strange’s encounters with the new mystic librarian, Wong, is a welcome light point in the film. Benedict Wong is a perfect straight man to Doc Strange’s mischievousness. And Chiwetel Ejiofor as The Ancient One’s assistant, Modor, is the grounding rod to Strange’s antics. Modor is an optimistic mystic that holds much promise for Strange even when The Ancient One questions the good doctor’s abilities.

When it all comes down to the battle, Mads Mikkelsen as Kaecillius chews a scene like no other. But he is not a two-dimensional villain like we saw in Guardians of the Galaxy. Kaecillius has reason for his beliefs and envies the chance in revealing his plans. Some would say he is a sorcerer gone mad. The madness only has us question all the good intentions that The Ancient One promises to those that follow her path. 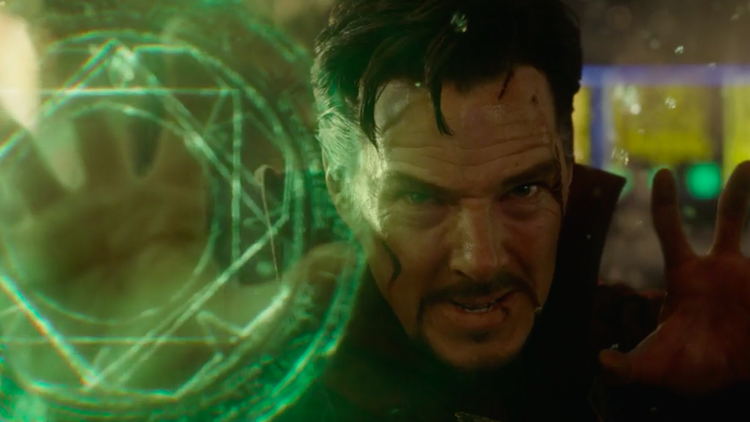 Nothing will prepare you for the grand battle. It’s a literal kaleidoscope of visual wonder that nearly made me want to be strapped in my seat while watching, and that was only in the 2D screening. For some, it may be a bit much and a little distracting from the story itself, although the audience I was with appeared to be wildly enthusiastic and enjoyed every minute of the ride. One cannot help but think that this could be the next cash cow attraction for Disney.

Aside from the wild effects, the visual splendor of it all, and a unique origin story, Doctor Strange not only takes us on a very different journey through the Marvel multiverse, but it disarms us with its humor. Dare I say, even more so than Tony Stark’s snarky humor. There is a welcome playfulness to Doctor Strange’s world, and it makes visiting it all the more fun.