If “Creed” is launching a new franchise in the boxing genre, it’s doing it the right way – with nostalgia. It worked with “Jurassic World”, it seems to be working with “Star Wars: The Force Awakens” and now the “Rocky” franchise seems to be on the right track for future films by bringing The Italian Stallion back for one more go-round. 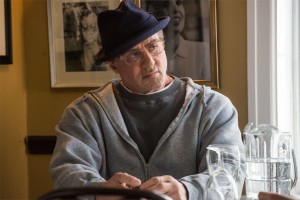 In my opinion, the best film since the original “Rocky” is “Rocky Balboa”, a look at the decline of the champ. Stallone gave what seemed like a send-off to his legendary character with dignity and humanity, making Balboa’s winning streak (“Rocky”s 2-5) look boring by comparison. Certainly, there was nothing more Stallone could dream up for Rocky to do. Enter “Fruitvale Station” director Ryan Coogler and his writing partner Aaron Covington.

The story they cooked up involves Adonis, the son of Apollo Creed, Rocky’s equally-legendary nemesis. He seems to have everything he needs in life monetarily, living well, no doubt, off of the winnings of his father’s successful boxing career. But he remains restless and gets involved in boxing matches in Tijuana to burn off the anger towards a father he never knew (Creed died in the ring in “Rocky IV”). Eventually wanting more, he seeks mentorship from Rocky to go professional, but continues to rebel against and struggle with his surname. 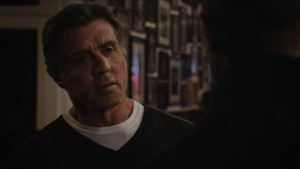 Stallone continues the excellent work he did in “Rocky Balboa” and once again delivers up an ex-champ who has out-lived those he loved and enters into getting close with someone new with trepidation. The scene where he meets Adonis for the first time is exceptionally well-layered. You can see skepticism, hesitancy and curiosity all over his weathered face. But Adonis is persistent, and eventually he and Rocky work to make Creed a contender.

“Creed” respects and employs its movie predecessors, referencing greatly the first half of “Rocky IV”, but also cleverly throwing a nod to the finale of “Rocky III”, both films we could easily leave in the ‘80s, but the ghosts of those movies cast an effective mood over “Creed”. 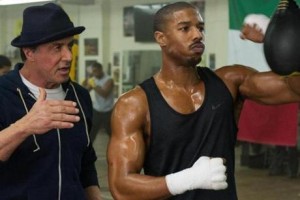 One of the major highlights of the script is how high it holds Apollo Creed as an icon. As much an icon as Rocky is in real-life entertainment history, in Rocky’s film world, it’s Apollo who is referred to by sports commentators and Balboa himself as the greatest fighter of all time. It’s just a fascinating shift of power after following the underdog and holding him so high for six movies.

Despite having the lead in the aforementioned “Fruitvale Station”, it was an indie, and this high-profile studio release is Michael B. Jordan’s coming out party (it certainly wasn’t “Fantastic Four”). He’s believable and complicated as the angry young boxer. The opponents he faces are all authentically formidable as they are real-life fighters – Andre Ward, Tony Bellew and Gabe Rosado. Bellew has an especially vicious jab that I would never want coming at me and for his film debut, he gives good “hostile opponent” at every turn. 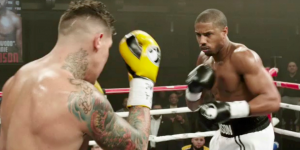 The music has shades of the ‘70s in it. Composer Ludwig Göransson develops a unique music set, which “Creed” deserves, but the softer moments feel washed in horns and gentle strings from decades ago (which parts of the Philadelphia set still seem to live in). And the exciting music used for training have echoes of the classic Bill Conti score from countless “Rocky” films, but the original theme is only used once, to great effect.

As with all boxing movies since “Raging Bull”, it’s noteworthy once again to discuss the direction of the fight scenes. It’s pretty amazing that movies continue to find new and exciting ways to shoot boxing matches (like “The Hurricane” did and “The Fighter”) when it feels like every avenue must have been covered by now. But “Creed” pulls off an exhilarating single take for Adonis’ first professional match that pulses with energy. The finale is scaled down to mostly traditional Rocky-esque fight coverage, with all the best results. The tension, score, and back-and-forth blows to the body and head all land with strength and power.

“Creed” is a crowd-pleaser on every level and the final sequence is a thing of beauty.