Movie Review- “Come and Find Me” 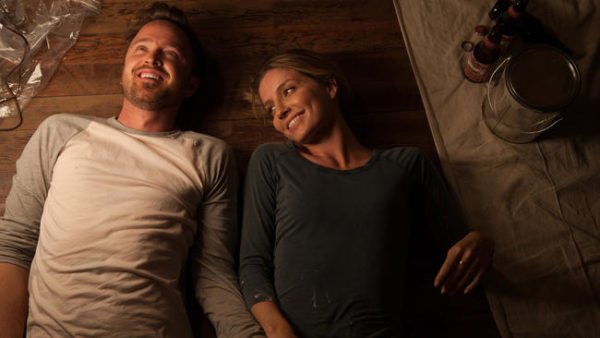 Walking into a screening of the small scale, independent thriller, Come and Find Me, it was difficult to know what to expect. The film seemingly came out of nowhere. It’s marketing is scant, with the most word of mouth coming from Joss Whedon’s twitter account.  The prolific television writer, and Avengers director is the “proud elder bro” of the Come and Find Me’s director and screenwriter Zack Whedon).

Come and Find Me follows David (Aaron Paul). Waking up, the young graphic designer finds his life turned upside down when his girlfriend Claire (Annabelle Wallis) suddenly goes missing. As a year passes, David is no closer to tracking her down. As hints of Claire’s real life as a government agent emerge, David finds himself pulled into the tense story of political intrigue.

Come and Find Me is the film debut of director and screenwriter Zack Whedon. Whedon has been cutting his teeth on television since 2006 when he penned his first episode of the fondly remembered HBO western, Deadwood.  Since then, Whedon has continued developing his skills in hour long television. Most recently, the talented writer worked on the AMC period drama  Halt and Catch Fire, as well as the SundanceTV drama, The Red Road. His well-written script for Come and Find Me is punchy, there’s even an occasionally quippy moment to lighten the dark tone. The film is also a solid debut directorial effort from the young creator. He transitions easily from the lighter, relationship based flashbacks to the much heavier thriller elements. It’ll be exciting to see what he does next.

The film is largely reliant on the performance of Aaron Paul who carries much of the movie. Paul has done great work in the years since Breaking Bad ended. While a lot of the efforts have been small, this film as well as 2015’s Eye in the Sky stand out as particular examples of Paul’s likable and ultimately relatable screen persona. He shines in the flashback sequences, which are some of the strongest moments in the film. The scenes not only show what David had, and why he would fight so hard for answers, but also how far he falls when Claire goes missing. Paul also portrays a stunning vulnerability, which is vital to his success as David. The success of Come and Find Me depends on the performance of a strong, likable leading man, and Aaron Paul is a perfect casting choice.

The biggest problem with the narrative is the roll of film which jumpstarts the mystery portion of the narrative. The political narrative is somewhat lost as the film takes shape. The story revolves around Claire’s pictures; however, their meaning isn’t explained. How do the depicted incidents relate? Did they somehow play into Claire’s disappearance? However, the pictures are just a mcguffin. The pictures are only there to propel the narrative; while, it’s up to the characters to keep the audience invested, and pull them into the film. As such, Come and Find Me more than does its’ job. The characters, as well as the chemistry between Paul and Wallace pushes the narrative along. The rather then political backstory is less important than the relationship shared by David and Claire.

Fans of Aaron Paul should definitely check out the independent thriller. The success of the film is reliant on the talented young actor, and he continues to not disappoint in his post Breaking Bad work. Thriller fans should also check it out, as the tightly crafted script keeps audiences on their toes. It’s a great debut effort from Zack Whedon, and there’s hopefully more work coming from this talented writer.

Come and Find Me opened in cinemas on November 11th. Check movie theater listings for a showtime near you.

Agent Carter fans: Keep your eyes open for Enver Gjokaj as Alexander. The actor shines in the very brief performance. Here’s to seeing more of the likable actor on screens in the future.