TWO MOVIES IN ONE

Movie Review – “Birdman, Or The Unexpected Virtue of Ignorance”
Review by Brendan Fleming

“Birdman” is a movie with a lot of things going on, and if you blink you just might miss the message.

Lets start with the title of the film. The title suggests that the creative minds responsible for this fascinating film don’t mind if you refer to it by either of the titles listed above. There really are two stories happening at the same time, though it does appear to be just one. Lets begin with “Birdman”.

Michael Keaton plays Riggan, an actor who twenty years ago was the title character in a movie franchise called “Birdman”. A superhero who defended the Earth against apocalyptic monsters and villains. The films were a huge success and made everybody involved a lot of money. After the third film, Riggan decided to hang the wings up and get back to being an actor. That decision hasn’t worked out well for him and he’s been swimming in mediocrity since. This aspect of the film would be intriguing on it’s own, because this comes close to mirroring Michael Keaton’s real life. If you are unaware, Michael Keatan was Batman in the late ’80s to early ’90s. He hung up the cape after the second one. This factoid presents interesting questions. Like, did he get cast because of the similarities? Or did he get the part and it just so happens there’s an ironic backstory? Though I wouldn’t view Keaton’s post-Batman career as stagnant. He’s worked consistently since playing The Dark Knight, appearing in over twenty-five films including “Pacific Heights” and “Jackie Brown”. Hanging up the cowl at the conclusion of “Batman Returns” did seem to affect his career. For a while, until “Jackie Brown”, his movies weren’t that high profile. But having cemented himself as a dependable talent with iconic roles in “Night Shift”, “Mr. Mom” and “Beetlejuice”, he kept working and earning a living. And lets face it, that’s the only thing that’s important. On the other hand, it seems Riggan didn’t have the luxury of earning a living, and he lived off Birdman money for longer than he thought he would.

“The Unexpected Virtue Of Ignorance” more closely reflects what this film really is about. I feel that Riggan was a true actor and very talented. He said yes to Birdman for the money. Any actor would. And sometimes when you play that role too well AND it makes a ton of cash, that’s what the world starts to believe you are. There’s no acting involved in superhero films. The costumes are pretty much it. What’s an actor to do when he wants to go back to acting, but Hollywood doesn’t have any interest in financing you? What Riggan does is decide to write, direct, and star in a Broadway production of: “What We Talk About When We Talk About Love”. Riggan has adapted the play form a short story by the same name written by Raymond Carver. In the opening scene of the film we see Riggan, with his back to us, floating in his dressing room meditating. His Birdman alter ego is ever present, questioning Riggan’s decision making. “How did we get here? You used to be a movie star.” Of course this is Riggan trying to figure out if turning his back on Birdman and doing theatre was a good idea artistically or financially. During the course of the film, I was positive that he really wasn’t using Birdman powers, but by the end of this wild ride I wasn’t sure. 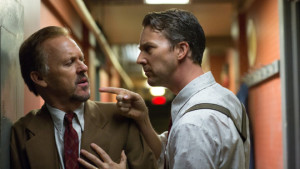 The way this film is shot gives the effect of one continuous scene. Actors come and go and the camera follows and moves with the characters. We the audience, along with the actors, are propelled into the frying pan of the rehearsal for the play that begins previews the next day. The camera follows Keaton from his dressing room to the stage where he arrives in time for his cue. He sits at a table with three other actors who are in a heated debate. Quickly, Riggan begins to direct an “over-acting” cast member who starts trying the lines in different ways. Riggan doesn’t like anything this guy is doing and suddenly a light falls from the rafters, knocking the actor out. Stage-hands and the other actors come to help, but Riggan goes back to his dressing room followed by his best friend, laywer, and producer of the play, Jake (Zach Galifianakis). Riggan tells Jake that he thinks he used his Birdman powers to make the light fall. “Are you drunk?” Jake replies.

But they have bigger problems. They need to replace the injured actor. They throw out names, poking fun at the superhero movies, but also turning the screw into Riggan who gave all that up. “What about Jeremy Renner?” Riggan asks. “He’s busy doing ‘The Avengers’”. A knock on Riggan’s dressing room introduces us to the new-to-Broadway co-star of the play, Lesley (Naomi Watts). She tells the guys that she knows Mike Shinner and is available and wants to do it. Asked how she knows Mike, Lesley responds, “We share a vagina.” Mike Shinner (Edward Norton) turns out to be a Broadway hot shot. He sells tickets and the critics love him. Riggan is impressed with Mike who comes in knowing all his lines. He’s been helping Lesley rehearse, but doesn’t want to get wrapped up in “lines, let’s just feel”. He’s a method actor with a chip on his shoulder and disdain for Hollywood types. Having been involved in a lot of theatre productions, I can tell you that a lot of things go on behind the scenes of a play. Hook ups and fights, and usually more drama than the drama happening on the stage. The chaotic energy of the rehearsal process is palpable as the play within the film gets closer. This energy has a sound track brought to life by Antonio Sanchez’s original score that is all drums. The drum and cymbals bounce on your nerves as the anticipation of opening night approaches. The music changes to classical score a couple of times during the film when Riggan’s feeling at ease or at peace. 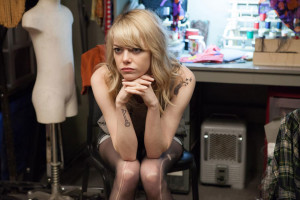 One of those rare moments comes when Riggan has a confrontation with his daughter Sam (Emma Stone). She’s just gotten out of rehab and is working as her father’s assistant. He finds a joint and goes into a speech about how this play is important to him, to his career. How he has a “chance to do some work that actually means something”. Her response is like a glass of cold water to the face. The classic score comes up and Riggan takes a hit off the joint. Nothing like a little perspective huh? The unexpected virtue of ignorance is this. It IS important to him. It doesn’t matter if no ones else cares. He wants to do this for him, and my god he will.

What I took away from the second viewing of this film was how great the writing of the script is. I was too involved with the camera work and editing the first time around, but once I got acclimated to the world of Birdman I started really hearing the words. Nothing is wasted and all the words are golden. One of my favorite scenes in the film is when Riggan confronts a respected reviewer who can make or break a play. She tells him she’s going to destroy the play before even seeing it. Why? “Because I hate you and everybody you represent…this is the theatre. And you don’t get to come in here and pretend that you can write, direct, and act in your own propaganda piece without coming through me first.” Riggan’s retort is just as brilliant. The whole film is filled with the bliss of great writing. At this point in the film, the two trains of his personality are barreling down towards each other. The “who really cares/why are you doing this” that his daughter and Birdman are riding on, and the “this IS important/this IS art train coming in the other direction. Both are scheduled to arrive on opening night. What happens when the trains arrives? You’ll have to see for yourself. The end makes for good debates among friends, but one thing is for sure. You’ve never seen a film like “Birdman”, and I hope The Academy doesn’t lay an egg when it comes to handing out Oscars.