There is a LOT going on in “Avengers: Age of Ultron”, the latest in the ongoing saga of Earth’s Mightiest Heroes. That works both for and against the film, but overall, in the hands of Joss Whedon, it’s never dull.

Ten films into the miracle known as The Marvel Cinematic Universe (how DO you pull that off?), there is a massive set of characters, stories and subplots shooting off in a hundred directions and an overall arc that has been announced that must be catered to. It’s no wonder director Whedon has stated that the franchise may kill him in writing the script alone.

At the start of this film, Tony Stark is now interested in protecting the world with Iron Man-like technology acting as a robot army, serving twofold – giving the world “a suit of armor” and hoping that these protectors will one day replace The Avengers, allowing them to slip into the sunset. Steve Rogers (Captain America, one person who doesn’t know) is skeptical of this and…

…he’s right! The artificial protector becomes Ultron, a self-realized powerful, robotic mass of artificial intelligence who believes the best thing for The Earth might be removing humanity from it. Do you watch the news? Ultron has a solid point. However, like most people who make solid arguments for raging against the sorry state of humanity (talkin’ to you, Magneto), unfortunately, he has maniacal methods for doing something about it. 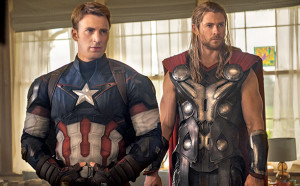 This is an engaging, high-minded plot, yet there is the inability within it to have quite as much fun as the first time around with The Avengers. There is much moral discussion about what’s right and what’s wrong and the dialogue seems to move the plot along more than give us the opportunity for the clever verbal sparring we got in “The Avengers”. Again, a lot of this plot is in service to the next movie, “Captain America: Civil War”, which will divide the superhero team philosophically.

That being said, Whedon knows his next responsibility is to deliver some serious superhero action, which he does in buckets. This is a hammeringly bombastic adventure movie and in the hands of a lesser director (talkin’ to you, Michael Bay), it would’ve been solely headache-inducing, but stakes are raised logically, there’s sacrifice and the second half of the film has more Avengers banter wisely used to offset the repeated thud sound of robots getting pulverized.

In 2012’s “The Avengers”, Whedon had a knack for creating iconic superheroic tapestries. Although they aren’t necessarily as new here, he succeeds again at this, with an opening forest battle sequence that gives us a slo-mo moment that captures each Avenger in their heroic glory. Plus a final battle against hundreds of Ultron bots slows again to show these warriors’ commitment to defending the planet.

Which brings me to Black Widow and Hawkeye. First time around, they seemed like the least special Avengers with the least special powers. This time around, I was more in tune with just how much more they risk to fight superhuman enemies. There’s a backstory to Hawkeye which helps this, but even before that’s laid out, the idea that Hawkeye’s just a guy – a very skilled guy, but just a guy – proves that he’s actually braver than the heroes who bring otherworldly strength or scientifically modified genetics to the party (talkin’ to you, Thor & Cap). I mean, taking on an army of robotic sentinels with arrows? You win, dude.

This is definitely The Avengers’ “Empire Strikes Back” – it’s darker, it feels like a “middle story”, and winning comes at a price. This is how “seconds” are for Marvel – Whiplash busted up Tony Stark pretty good, The Winter Soldier decimated S.H.I.E.L.D. and “The Dark World” offed Thor’s mother. The Avengers here are beat up and split up and the end credits offer a quick reminder of what’s to come, what’s waiting for them.

Joss Whedon has been quoted as saying that he’s a huge fan of The Avengers, but he’s not making movies FOR the fans. GOOD CALL. When Spielberg made “Indiana Jones and the Kingdom of the Crystal Skull” for the fans, we all saw what happened there. Whedon says he and Executive Producer Kevin Feige make these movies because THEY want to see on the screen what they always loved when they read the comics, and that doing THAT well, means he could deliver what he loves to an even broader audience.

I think everything people love about The Avengers is in “Age of Ultron”, and I hope as the story expands and Joss Whedon hands off the reins to The Russo Brothers, it continues to appeal to all audiences.