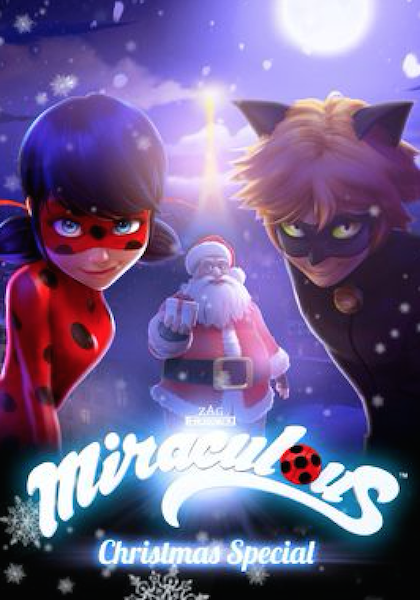 This musical episode of Miraculous opens on a snowy Christmas Eve in Paris with Marinette, Alya, and Manot arriving at the Dupain-Cheng bakery, so that they can be there when their friends arrive to hand out parents. Marinette hands out presents to all the people who come to donate to the bakery, singing about how happy she is to see them, until Chloe and her father comes over, that is. Both sets of parents force the girls to play nice and say “Merry Christmas” to one another. After they leave, Adrien’s bodyguard comes, and Marinette rushes upstairs to find Adrien’s present, which Tikki finds for her. Marinette rushes out in to the snow to give the bodyguard the present in hopes that he will pass it on to Adrien. 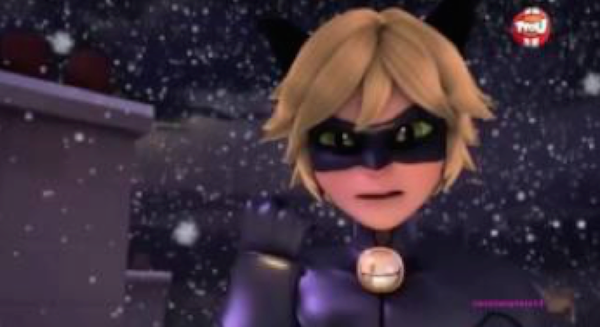 At the Agreste home, Adrien and Nathalie are decorating for Christmas, and Adrien receives Marinette’s present, but Mr. Agreste won’t come down to celebrate with them. Natalie goes to Mr. Agreste to remind him that this Christmas is just as hard for Adrien, as it is their first Christmas without Adrien’s mother. Meanwhile, in his anger and loneliness, Adrien transforms in to Cat Noir, with help from his kwami Plagg, in his room and leaves through a window, watching his friends and their family and lamenting about he is alone on Christmas. He goes to a park where a giant Christmas tree is all lit up to destroy it with his Cataclysm power, but he remembers his mother, and destroys an advertisement instead. In his regret, Cat Noir goes back to being Adrien, and immediately sees that Plagg is incredibly weak. To keep Plagg warm, Adrien opens up the present from Marinette, a Santa hat she made herself, and wraps Plagg in it while expressing gratitude for Marinette and wishing Plagg a Merry Christmas. 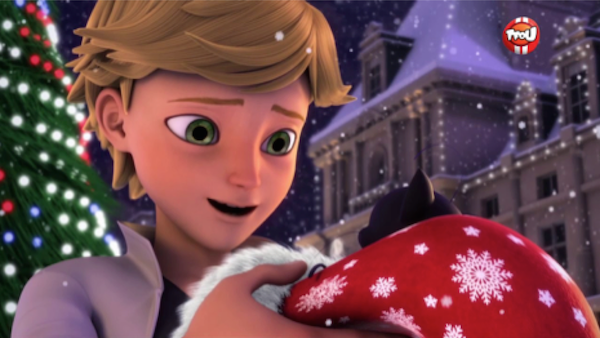 While Adrien is out wandering Paris in search of some Camembert cheese to feed Plagg, Mr. Agreste goes to Adrien’s room to tell him that he wants to celebrate Christmas with him, and sees that Adrien is gone. He immediately orders everyone in the household to go look for his son, and Natalie calls all of Adrien’s friend to deter mine where he is. When the Dupain-Chengs get the word of Adrien’s disappearance, Marinette tells her parents that she’ll wait by the phone while they go to look, and then transforms in to Ladybug to go find him.

Across Paris, Adrien sees some children being mean to a Santa and stand up for him. As thanks, Santa offers Adrien some Camembert, which he gives to Plagg, and a ride home. While taking him home, Santa asks about his home life, and Adrien offers just enough in the way of information for Santa to offer his condolences. Adrien gives him Marinette’s hat as a thank you, telling him that everyone should have a present on Christmas.

At the park where Cat Noir had been earlier, Ladybug finds the advertisement that he had destroyed, and figures that Cat Noir must be trying to protect Adrien from an akumatized villain, courtesy of Hawk Moth. She sings another song about how she loves Adrien, and hopes he’s okay. Santa brings Adrien back home, but Mr. Agreste refuses to believe that he has good intentions for bringing his son, something Ladybug corroborates by saying that Santa is an akumatized villain. Mr. Agreste rushes Adrien inside, and Ladybug continues her pursuit of Santa. When proven wrong, Ladybug tries to help Santa, but he shakes her off. This leaves Hawk Moth the opportunity to actually akumatize the hat that Adrien gave him, turning him in to Evil Santa and sending him to Eiffel Tower to attack Ladybug before he flies off to ruin Christmas for all of Paris, which he sings about. 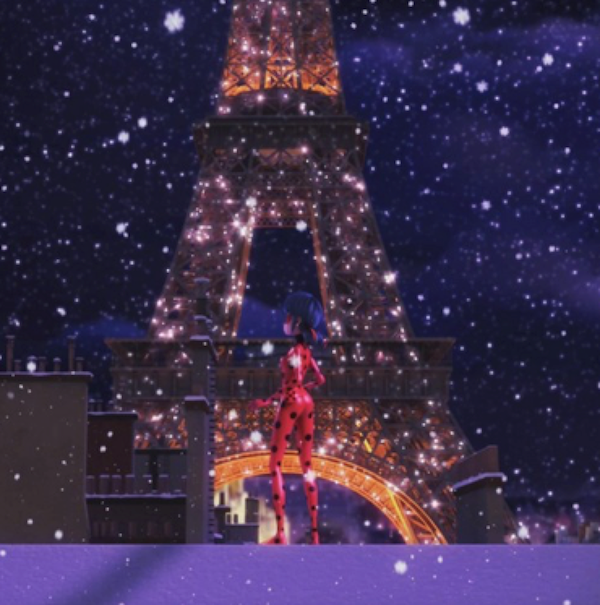 Natalie tells Adrien that his father wants to celebrate Christmas with him and to give him a little bit of time. But before Mr. Agreste can come back, Adrien gets word of the Evil Santa, and tells Natalie he needs to leave before transforming back in to Cat Noir. He meets up with Ladybug, and they try to bring down Evil Santa before he can ruin anybody else’s Christmas. Twice, Evil Santa shakes off Cat Noir, causing Ladybug to have to save him. The second time it happens, Evil Santa tosses them in to Alya’s living room before flying off. Ladybug uses her Lucky Charm power and gets a box out of it. She asks Alya’s family for office supplies and sends Cat Noir to the Dupain-Cheng bakery to get some more supplies, telling him to meet her back at the Eiffel Tower. 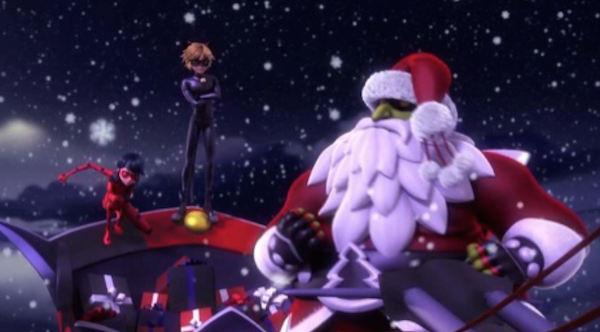 At the Eiffel Tower, Cat Noir offers Evil Santa a gift from him and Ladybug as a token of surrender, singing about how everyone deserves a present on Christmas. Evil Santa gets close enough to allow Cat Noir to use his Cataclysm power to destroy the Santa Hat, and Ladybug is able to get the akuma to turn it back in to a butterfly and send it on its way. Cat Noir and Ladybug wish each other Merry Christmas, and go their separate ways.

A little later that night at the Agreste home, Adrien opens the door to see his friends all there to celebrate Christmas with him. Natalie tells him that they were all so happy to hear that he was safe that she invited them over to celebrate. Mr. Agreste comes down the stairs and sees of all his son’s friends, and allows them to all stay over for Christmas dinner. With his friends and family all around him in the dining room, Adrien looks up at the portrait of his mother and wishes her a Merry Christmas, wherever she may be. 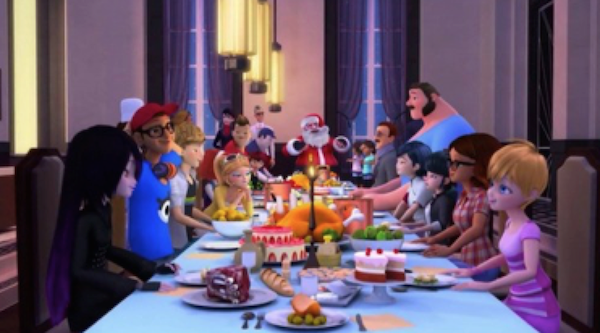