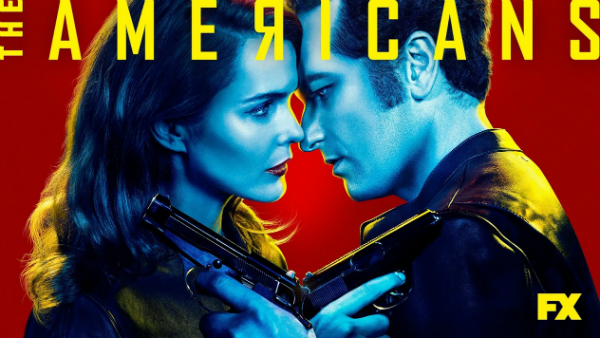 Season five of The Americans starts tonight (YAY), so it’s time for a little refresher on where we left the Jennings family on America’s most relevant program.

Remember the scary biological agents? The acquisition and attempts to transport a deadly virus were huge in season four. Philip (Matthew Rhys) and Elizabeth (Keri Russell) worked with biochemical warfare scientist William Crandall (Dylan Baker) to get the virus, aided by semi-unwitting double-agent Martha (Alison Wright). Once they’d succeeded for the first time, their courier chickened out and Gabriel (Frank Langella) was stuck keeping the virus in his freezer. Of course Gabriel is eventually exposed, and the Jennings, William and Gabriel spent a stressful weekend quarantined together while vaccines provided by William took effect. They made a second attempt to secure and smuggle a biological weapon and succeed in getting it out of the country with Martha, housed in the body of a dead rat. Their final attempt to get a biological weapon out of the lab and out of the country resulted in William being cornered by the FBI in a park and breaking the vial of disease in his hand.

And speaking of Martha, this was a big season for her! After years of bugging Agent Gaad’s (Richard Thomas) office for “Clark,” her activities escalated. First, Clark revealed that he’d killed her colleague Gene to protect her. Although this contributed to her coming undone in some ways, it also deepened their bond. She began sneaking the surveillance schedule for William, and before long she was being surveilled herself. Stan (Noah Emmerich) has always suspected her, and he convinced Agent Aderholt (Brandon J. Dirden) to take her out to dinner in an effort to get to the heart of her strange behavior. Although Martha told him convincingly that she was just in a relationship with a married man, Hans determined that she was being followed. Philip pulled her out of the field and hid her with Gabriel in the safe house. She freaked out and snuck out, concurrent with Stan and Aderholt unraveling that she’s been involved with the man in the mysterious duo of Russian agents they’ve been seeking for years. Fortunately, Philip was able to get her back to the safe house and away on a plane to Cuba, then to Russia, before she got nabbed. (During all this drama, there’s an amazing scene of Elizabeth seducing Philip in an effort to help keep his head in the game while he’s worrying about Martha.)

Trouble at work is the least of the Jennings’s problems, though, as Paige (Holly Taylor) has confessed to Pastor Tim (Kelly AuCoin) that her parents are Russians and Henry (Keidrich Sellati) is palling around with Agent Beeman because they are a couple of lonely guys.

Early in the season, Elizabeth discovered that Paige had told Pastor Tim about them, and Philip and Elizabeth told Paige in no uncertain terms that her choice had put their entire family in jeopardy. They required her to stay friendly with Pastor Tim and pregnant Alice (Suzy Jane Hunt), attending all of her usual church functions in order to sell the lie that the Jennings are benign embeds– essentially diplomats. Philip and Elizabeth went back and forth between working this angle with Tim and Alice and considering assassinating them. The possibility of killing the pastor and his wife was checked by their certainty that Paige would know they were involved, and the “we’re not bad guys” routine was working fine until Pastor Tim went missing on a mission trip. Alice was convinced that he’d been killed by Russians while abroad, and she was on the brink of turning the Jennings parents in when Tim was discovered alive. The tenuous peace with the pastor and his wife came to a head when they accepted a dinner invitation from Philip and Elizabeth and Stan crashed the party. Stan and Henry were the only ones at the table who didn’t know there were Russians in the room, and the tension was delicious.

In the same episode in which the world’s most awkward dinner party took place, Paige and Elizabeth were set upon by two muggers outside the church’s food pantry. Of course, Elizabeth took care of them, killing one of them in front of Paige. This put a dent in Paige’s belief that her parents are the non-violent kind of spies.

It’s going to be important someday that Henry and Stan are BFFs, but everyone is so worried about day-to-day spycraft and the risks that Paige poses that they haven’t even noticed the quiet time bomb ticking away at the computer in the living room. (It’s Henry– that’s where he plays video games on the computer the KGB provided that has some SECRETS.)

The saddest storyline in season four is Elizabeth’s mission to gain higher security access for William via sweet Young Hee’s (Ruthie Ann Miles) loving husband, Don (Rob Yang). Young Hee is probably the best friend Elizabeth has had, but because Don is too clean to blackmail with real secrets, Elizabeth drugged him and pretended to have been impregnated by him. The collateral damage left behind by this operation is likely to echo in season five. If Philip was affected by Martha, Elizabeth was maybe equally affected by Young Hee.

Another dimension last season: EST. Philip has continued with the consciousness-raising group, reconnecting with memories of his real childhood (like killing a neighborhood bully) that give us insight into how he wound up a soldier and in the KGB. Elizabeth, in an effort to connect with him, tried EST and didn’t see the value in it. The EST issue also raised its head in Gabriel’s presence, and the implication was that nobody has been undercover for as long as the Jennings, and the strain of their many lives is showing.

Also notable last season- the ousting and (accidental) killing of Agent Gaad. Once it became clear that his department had been infiltrated by the KGB in the guise of his own secretary, Gaad was shown the door. While vacationing abroad with his wife after leaving the FBI, he was cornered by some KGB agents who were hoping to turn him, but their miscalculated effort went horribly awry and Gaad wound up impaled on a shard of his hotel room’s glass door.

Finally, the biggest shock of season four was the death of Nina (Annet Mahendru) in a Russian prison. She’d befriended the scientist kidnapped from America and sequestered in Russia to replicate stealth technology, and although she had positioned herself well enough to manage him as instructed, her soul craved the redemption of a true friendship. She attempted to smuggle a letter from Baklanov (Michael Aronov) to his son, explaining why he had disappeared, but the letter was intercepted, Nina was returned to her prison cell for a while, and then she was shot to death in a hallway. RIP, Nina Sergeevna.

SO: Where we left everyone at the end of the season…

ELIZABETH: Determinedly keeping it together, despite Gabriel suggesting that she and Philip take the kids and move home to Russia.

PHILIP: About to be found by his first, Russian son; ordering Paige not to see Matthew Beeman again.

PAIGE: Making out with Matthew Beeman!

HENRY: Who cares? Something with Stan or a computer…

STAN: Winking at Philip about their kids making out; questioning a dying William.

OLEG (Costa Ronin): Getting ready to move back to Russia to be near his family.

WILLIAM: Dying, but not before putting Stan onto the fact that the elusive Russian spies have kids.

PASTOR TIM & ALICE: Content to believe the Jennings… for now.

TATIANA (Vera Cherny): Getting promoted to Arkady’s job after overseeing the bioweapons missions.

ARKADY (Lev Gorn): Getting deported because the U.S. suspects him in the death of Gaad!

Obviously there are a few people I didn’t include, but this should have us ready for season five. Bring it!