Home » The Daily Bugle » What Does It Mean that Jeff Goldblum is The GrandMaster in Thor: Ragnarok?

What Does It Mean that Jeff Goldblum is The GrandMaster in Thor: Ragnarok?

Recently, Marvel Studios released news that they had cast Jeff Goldblum in Thor: Ragnarok as an enigmatic character named The Grandmaster.

This is amazing — but why?

First off, let’s get this out of the way — it’s Jeff “life finds a way” Goldblum. He makes everything better!

But secondly, who is the Grandmaster and why is this awesomely weird casting?

The Grandmaster’s real name is En Dwi Gast. He is an ancient being who belonged to one of the first intelligent races in one of the first galaxies to form following the Big Bang. Sadly, he is the last known survivor of those civilizations and is almost as old as the universe itself — a borderline immortal of nigh unlimited power.

There is a small fraternity of these nigh immortal cosmic beings that have come to be known as Cosmic Elders. Among their ranks is also The Collector, whom we’ve already met in Guardians of the Galaxy as played by Benecio Del Toro.

These beings tend to have one intensely obsessive area of focus, like The Collector — surprise surprise — feels the need to collect things. Grandmaster’s obsession is games in whatever form they might take: sporting events, board games, card games, video games, whatever. If it’s a competition between at least two opposing forces, the Grandmaster is into it. If he can bet on it, even better. Of course, the stakes are usually pretty high, gambling for a character’s life or even his very own. 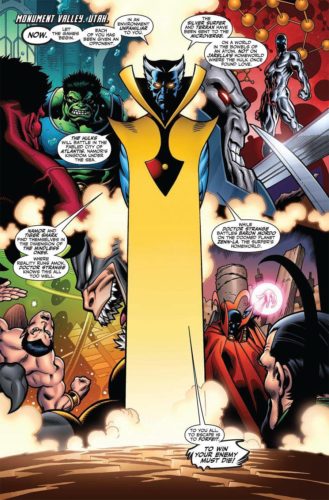 He’ll typically just take whomever he wants to see fight or play, putting them in an arena and pitting them against one another. He’s done that with the Avengers and West Coast Avengers, he’s done that with The Defenders, with the Squadron Supreme and lots of other characters.

Famously, he fought Thanos for ownership of the Mind Gem and lost. He also fought death for the resurrection of his Cosmic Elder brother, the Collector.

So why is any of this important to Thor: Ragnarok? First things first, it gives us a flavor for the film that we can use to gauge our expectations. Throwing in a cosmic character like the Grandmaster, as played by Jeff Goldblum, is right on par with Benicio Del Toro as The Collector in Guardians of the Galaxy. We can probably expect some sublimely strange wandering about the Nine Realms, this being the case. 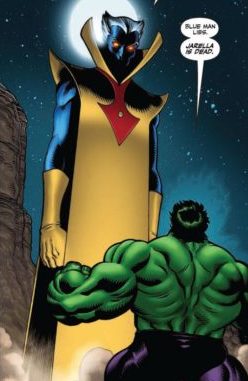 Maybe, more importantly, it gives a little more credence to the rumors that Thor is made to fight Hulk in some gladiatorial-like matches and that they then take off on a cosmic road trip together to find some person or thing to defeat Loki and Hela. Any fans of the series Planet Hulk should be excited about this news because this story could be the Marvel Cinematic Universe’s best approximation of that story. It would also serve as the best possible way to explain how the Hulk is now no longer on earth — Grandmaster kidnapped him to fight in his games.