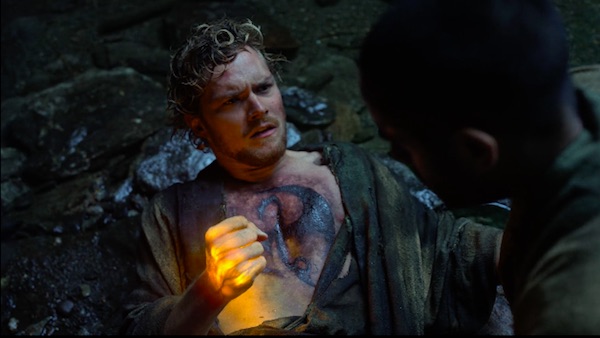 Iron Fist opens in an idyllic valley. It is a flashback. Danny (Finn Jones) lies unconscious in a trickling stream. He suddenly snaps back to reality, his fists flaring angrily. Davos (Sacha Dhawan) looks down at him, “You did it, Danny. The trial of Shou-Lau… You’re the Iron Fist!”. 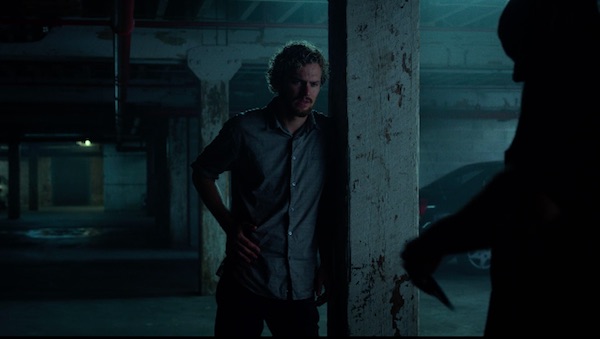 Danny suddenly returns to reality. He stands in a dingy bathroom, gingerly patching up a painful stab wound in his side. He’s jittery. While he works, he talks with Davos. They are on two separate wave-lengths. Should they go back to K’un-Lun so Danny may face his duties as the Iron Fist? Rather, Danny feels that he needs to stay in New York. This allows him to fight the Hand right in front of him. He’s on their home turf. Davos reluctantly agree to continue on their current path. However, Danny’s wound needs stitches.

Claire (Rosario Dawson) is startled to see a battered and bleeding Danny once again on her doorstep. She manages to get control of his bleeding only after stapling the stab wound shut. However, as they talk, it seems Claire and Danny aren’t on the same page as it relates to Colleen (Jessica Henwick). Danny barely restrains his anger as she attempts to defend Colleen.

Later, Davos and Claire share an uncomfortable cup of coffee while Danny meditates upstairs. While they talk, Davos tells her more about K’un-Lun, and their Iron Fist training. However, his anger slips through as they discuss his own history with the Iron Fist. Despite being Danny’s friend, Davos harbors a lot of anger towards him due to his abrupt departure from K’un-Lun. Claire stands as the doorbell rings. She ordered a pizza.

It turns out, Colleen comes bearing the pizza. While the warrior monks talk upstairs, Colleen and Claire work out their differences on the street. According to Colleen, there are different organizational groups within The Hand. Her faction is trying to help people. Claire desperately wants to hate her. After all, the Hand killed her friends as well. However, she can’t do it, and invites Colleen upstairs.

However, Danny continues to be a stubborn sort and alienates not only Colleen, but Claire as well. Both women legitimately want to see Danny succeed, but he continues act like a little boy having a snit fit.

That afternoon, Danny meets with Harold (Davin Wenham) and Joy (Jessica Stroup). Joy is not trilled to see Danny, and her demeanor turned even icier after she learned Danny lied to her about her father. However, they are ready to take the fight to the Hand as a group. As they talk, it becomes clear that Bakuto (Ramon Rodriguez) is their new target. Harold flashes a pleased smile as Danny agrees that the new leader of The Hand needs to die.

Later, Colleen arrives at the hospital hoping to get Danny more antibiotics for his wound. However, she is double-crossed by her friend, who is former student. While Colleen waits behind the hospital for the drugs, a car arrives. As the group of stern looking henchmen emerge from the car, it becomes clear. Bakuto wants to see Colleen. 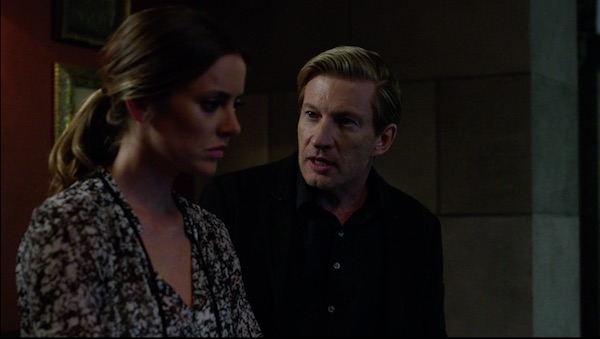 While Joy and Harold huddle inside the penthouse, Joy finds herself unsure if she’s really glad to have her father back. Harold looks over his daughter, “I thought you were stronger than this. Did I back the right child in this war, or not?”.

Meanwhile, the henchmen bring Colleen to see Bakuto. He looks Colleen over angrily, “You’ve let Danny infect you with doubt about our cause…”. The fear in her eyes grows by the moment. He smirks, “At least your final moments will be spent in service to The Hand”. 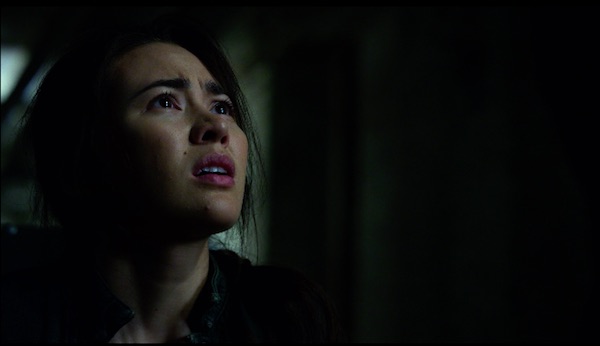 However, Colleen’s students aren’t the quickest sort. While one of the students taunt her former master, Colleen lashes out with a head-butt, breaking the girl’s nose. She runs to a mirror to look at the damage, giving Colleen just enough time to free herself from her bonds. A fight breaks out.

Later, Danny and Davos share a moment in the car. Despite the insistence that the two men are like brothers, this seems to be the first time that they’ve talked about the underlying tension between them. Davos feels hurt and betrayed. He can’t understand why Danny seemingly took the Iron Fist and abandoned not only him, but K’un-Lun as well. However, Colleen breaks out from the factory in front of them.

As Danny and Colleen stare at each other in the rain, Danny suddenly gets to be the bigger person. He briefly holds off the rattled Colleen, before the two give into their feelings and embrace. Danny holds her tightly in his arms, “We have to stop destroying everything…”.