MARVEL’S IRON FIST Recap: (S01E08) The Blessing of Many Fractures 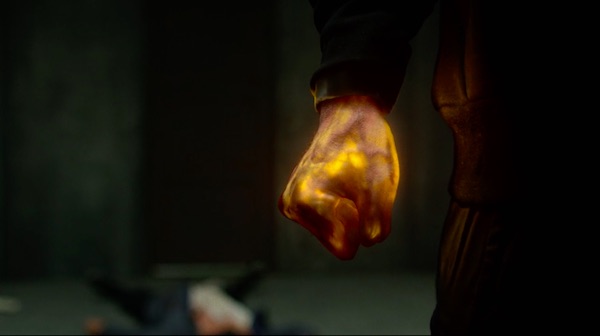 Iron Fist opens on Claire (Rosario Dawson), who sits alone in her apartment. Deep in thought, she ignores a call from Danny (Finn Jones), who is frantically trying to get in touch with her. He needs to talk to her immediately. It seems Madame Gao (Wai Ching Ho) may be sending people to hurt her. However, as Claire stands up, someone grabs her roughly from behind.

At the same time, Danny arrives at Harold’s penthouse. It seems Ward (Tom Pelphrey) is good at a lot of things, but crime scene clean-up is not one of them. There is blood everywhere.

Back at Claire’s, it turns out Colleen (Jessica Henwick) is her mysterious attacker. She silently points towards a visible shadow under the door. The Hand is coming for them.

Danny looks up as Ward enters the penthouse. As the two men talk, Ward proves himself a darn fine actor as he feigns shock at the blood stained apartment. Ever the manipulative sort, Ward even convinces the fragile Danny that he is at fault in Harold’s death. Ward looks him over, bitterness dripping from his expression, “You’re a cancer, Danny!”. As Danny makes a hasty exit, Ward takes a bottle of bleach from a shopping bag.

Later, Danny returns to Colleen and Claire. Struggling with everything going on around him, he can only think of one solution. The Chemist gave him the name of a Chinese town, perhaps if he strikes on the Hand’s home turf, it would be less expected. Despite Danny’s pleas that he go alone, both women refuse to back down. They are coming too. This isn’t only Danny’s fight. It’s their fight. 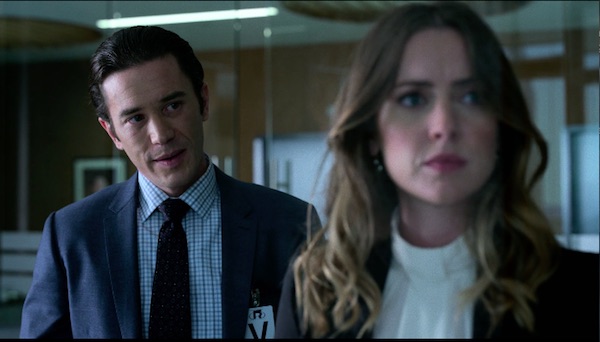 Meanwhile, the Meachum siblings find themselves on the other side of the boardroom table. Both struggle to maintain their composure as their ouster from Rand Enterprises is sketched out in front of them. Interestingly, when faced the prospect of finally having freedom, Ward seems grounded for the first time in a number of episodes. The deal seems simple enough; if Joy and Ward both sign, each gets a $100 million dollar severance. However, Joy isn’t ready to sign. 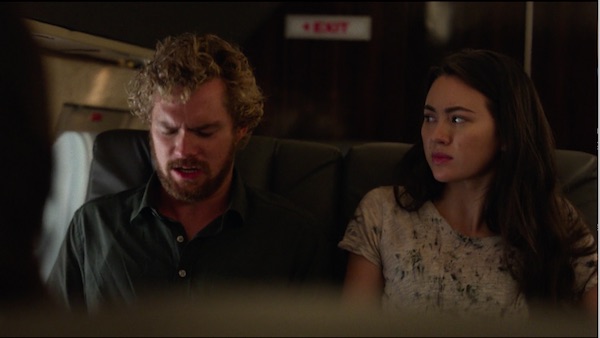 At the same time, Danny, Colleen and Claire quietly entertain themselves on a Rand chartered plane bound for China. With Colleen fast asleep, Claire and Danny talk freely. Danny openly blushes at his one night with Colleen. However, when Danny turns the topic to Claire’s love life, she remains tight-lipped. She clutches a letter tightly in her hand. The tone abruptly shifts as the plane hits turbulence, sending Danny’s anxiety spiking. As the flashbacks remind us, he’s been through this before. Luckily, Claire is good at talking superheroes back from metaphorical ledges, and she brings a sense of calm to the situation.

While Team Iron Fist scopes out the Hand’s factory, Ward can’t buy a break. It turns out, Joy rejected the offered severance package without telling him. He only learns of her hasty decision while he’s visiting Rand to sign his own severance deal. Both have acted rashly, and the cracks in their armor are starting to show. 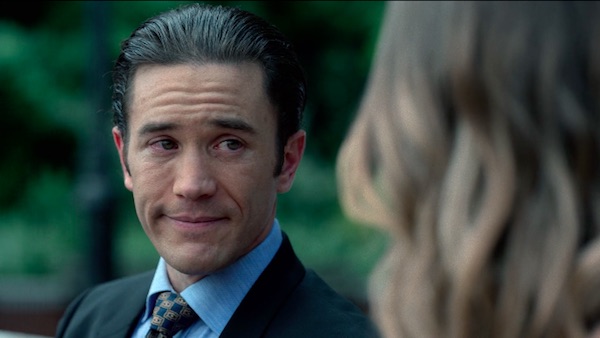 However, as Ward and Joy tentatively meet it turns out they have a fight against the board of directors after all. It turns out Joy had a drunken female private investigator (Reference Alert!) do some digging on the rest of the Rand board. As a matter of fact, each spent their time either “screwing the company, or someone who wasn’t their spouse…”. The emotion builds as Ward and Joy sit on a bench. Joy admits her admiration for her big brother in a scene powerfully acted by both. His influence helped her become the smart, savvy businesswoman she is today. Faced with his sister’s personal revelation, the emotional Ward can’t face her. With everything he’s been going through, he’s not the man she grew to admire. Tom Pelphrey shines in the scene as he continues to take Ward into new, dark and interesting places. 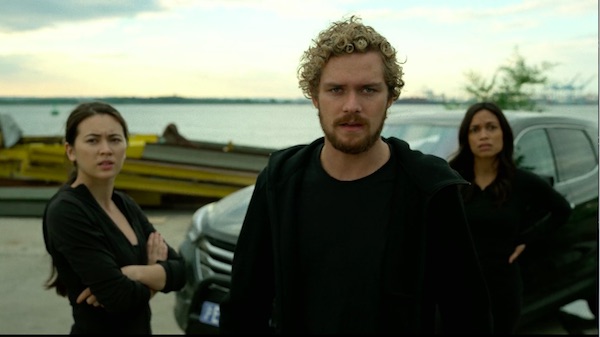 Meanwhile, Team Iron Fist easily infiltrate the Hand’s factory in China. The opposition is minimal as they sneak inside, and set to torching the building. Colleen and Danny share a simple moment as their relationship continues to grow and develop. However, the scene is short-lived as Madame Gao appears much earlier than anticipated. Danny sends Colleen to help Claire, choosing to go after the Hand on his own.

However, a opposition fighter jumps Colleen before she can escape. The result is a well crafted fight scene as the two women cross swords with well calculated ferocity. The duel goes back and forth, but the momentum finally shifts as Claire drives through the gate, bringing Colleen an easy victory. 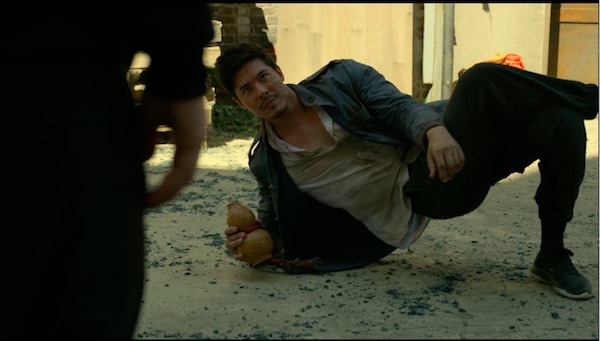 Meanwhile, Danny is not having quite as easy of a time. He ends up in a fight with one of the sworn protectors… essentially him, just on the other side. While the man seems drunk off his gourd (his chosen weapon!), he doesn’t go down easily. The fight is back and forth, showing some of the best stunt choreography of the season thus far. The momentum finally swings as Danny smashes the man’s gourd on the side of his head. Before Danny realizes, he’s straddling the man and punching him ferociously. He lost all his control.

At the same time, Ward brings Joy to the penthouse. It seems he’s through lying to his sister, and wants to tell her everything. However, as elevator opens, blood streams down from the doors. A panicked Ward backs away, leaving Joy confused. She can’t see it. 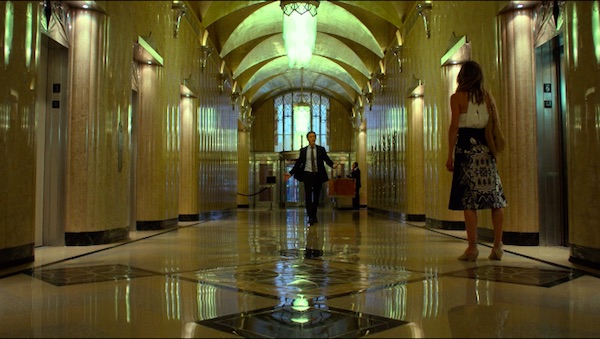 The moment blows up between the siblings as Joy once again must confront her big brother. However, the frightened Ward is trapped in hardcore denial. How can he admit failure to his little sister who looked up to him? The emotion builds in the scene as he throws everything at Joy  from pity, to blame over her supposed daddy issues. 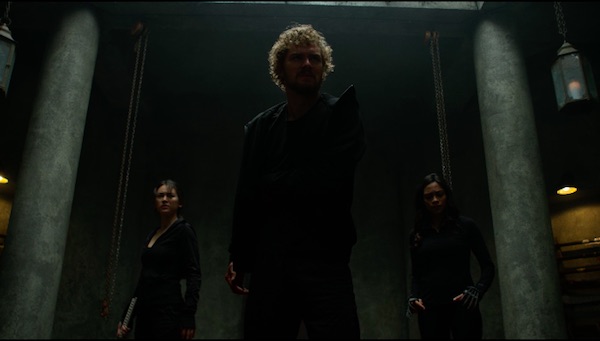 Meanwhile, a rattled Danny stands over his pulverized opponent as Madame Gao enters the room.  “Kill the women!” Madame Gao calls as another fight breaks out. The battle is a quick one as both henchmen are killed. It turns out, the weapons were poisoned. As Danny stares at the bodies, he realizes he’s seen this before. The pilots of his parent’s plane were poisoned with the same chemical. An angry Danny bursts through the door with his Iron Fist, pulling Madame Gao behind him.