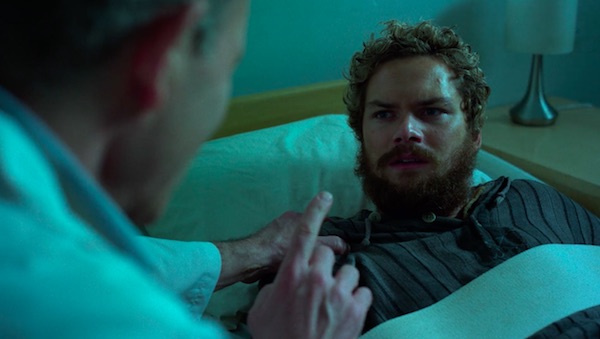 Iron Fist opens where episode one left off. Danny Rand (Finn Jones) is heavily restrained in the hospital, and his drugs are only now starting to wear off. As he stirs, he hears a voice. A grinning man sits at his bedside. It turns out, Danny is at a psychiatric hospital. “I shouldn’t be here,” Danny says, already devising a way out. The man pushes himself to his feet. “You need to kill yourself. It’s really the only solution for any of us…”. With that, the man grabs a fork, pushing it into the still restrained Danny’s jugular vein. However, commotion goes up as a group of orderlies rush in, hurrying the other patient out. Danny can barely react as he’s given medication and fades into a haze.

Meanwhile, Joy (Jessica Stroup) and Ward (Tom Pelphrey) sit down to breakfast. As they talk, Joy can’t help but think the mysterious man is actually Danny. Her brother flashes a smile, and promptly convinces her otherwise. “We’re getting him the help he needs…. We’re not bad guys, if that’s what you’re thinking”.

Back in the hospital, Danny’s pulled out of his fog by a Doctor (Murray Bartlett). While the two men talk, Danny painfully recounts the moments after the crash. After discovering the body of his Father (David Furr), Danny describes being found by an order of Monks. Interestingly, the Doctor switches gears. “Let’s talk about John Anderson…”. Danny raises a suspicious eyebrow, “Who’s that?”. “It’s you…”, the Doctor says, producing a passport. With that, he leaves the frustrated and rattled Danny alone with his thoughts. 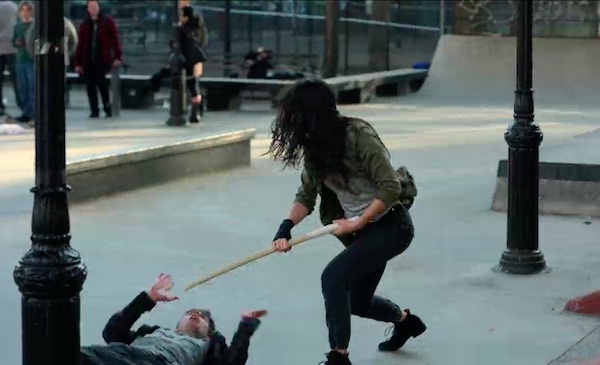 Later, Colleen (Jessica Henwick) hurries through the streets, a staff on her back, and an apparent tail on her heels. Suddenly, a group of attackers converge on her. However, the fight abruptly stops and Colleen berates the group. “You could hear those feet coming from a mile away!”. In fact, these are her students, and this was a lesson.

Meanwhile, Danny is having a difficult time adujusting to his new home in the psychiatric facility. Luckily, he’s made a friend in the man who tried to kill him earlier in the episode. However, everyone in the city wants to kill or commit Danny. So when he finally makes a phone call, he reaches out to Colleen. Unfortunately, she too can’t believe his story, and quickly hangs up.

While Danny struggles to convince people of his sanity, Ward and Harold (David Wenham) discuss ways to cement Danny’s insanity. Could they have Danny lobotomized? Perhaps they could send him overseas for a “psycho surgery”. However, Harold decides they can’t move on anything yet. Instead, he instructs Ward to speak with Colleen. Since they’ve been watching Danny in prison, they know about their phone conversation. They need to learn how they know each other.

Later, Ward visits Colleen’s Dojo. While the two talk, the suspicious Colleen keeps the conversation short. She doesn’t know Danny; furthermore, she has no idea how they found her. However, as the snake-like Ward tries to win her over, Colleen doesn’t bite.

Back at the hospital, the Doctor calls Joy after his conversation with Danny. While they were looking at footage of an old Rand television commercial, Danny told him about a trip to the circus he took as a child. After asking Joy a few probing questions, she confirms Danny’s story. Suddenly, even the Doctor seems to believe this is Danny Rand.

Meanwhile, Danny wakes up to the imposing sight of Harold Meachum hovering over him. The older man smirks, “Do you remember the song I used to sing, that annoyed the shit out of you?”. Danny thinks for a beat, but quickly remembers, “Danny Boy”. While the men talk, Danny reveals more about the years following the crash. He lived in the monastery at K’un-Lun, “…One of the Capitol cities of Heaven…”. Furthermore, Danny is an “Iron Fist”, a “living weapon”, and a “Sworn weapon of the Hand”. (Reference alert!). Unfortunately, Danny’s drugs take over, and he one again fades into the haze.

Later, Harold returns home. Shutting himself in for the night, Harold shifts to look at his window. Suddenly, there’s an eerie hand-print on the window, and “Where Did You Go” is scrawled above it. 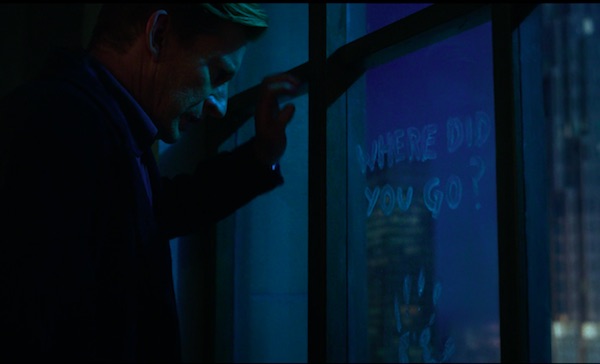 The next morning, Joy is struggling with her guilt. While her family seems totally convinced of the Rand impersonator’s insanity, she isn’t so sure. She looks to her Assistant, “What we’re doing to him is pretty shitty”. She suddenly has an idea. Grabbing a bag of M&M’s, she scribbles a note and prepares them to be messengered somewhere.

It turns out, the candy went to Danny. There’s a gleeful smile on his face as he pulls out all the brown pieces. However, Colleen’s arrival interrupt him. She had another suspicious visit from Ward Meachum, who offered her a $50,000 bribe to sign papers affirming Danny Rand’s guilt. Danny and Colleen discuss his family, and Colleen seems finally convinced of his story. As she turns to leave, Danny hands her the bag of candy, asking her to bring it to Joy.

Later, Colleen arrives at the Meachum offices, and hands Joy the bag of candy. There’s a beat of silence, while Joy looks at the contents. She collapses in her chair, emotion bubbling in her eyes. “It is Danny”. Colleen drops the bribe on her desk, “Tell your brother, I’m not signing these”. 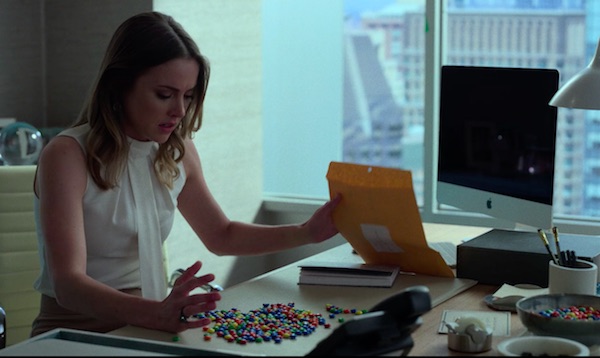 Meanwhile, Danny meets with his Doctor once again. The man believes that Danny is in fact who he says he is. However, as the discussion once again turns to the Iron Fist; things suddenly change. While he believes he is Danny Rand, the Doctor is suspicious Danny might have an anxiety disorder. Unfortunately, due to the powerful drugs Danny is taking, he can’t demonstrate his powers for the Doctor.

At the same time, Harold and Ward discuss Danny. Finally convinced of Rand’s identity, Harold seems convinced that Danny is of value to him. (Having problems with the Hand, Harold?). Danny is not only going to be moved, but Harold wants him kept safe.

Later, Danny is straight-jacketed and told he’s going to be moved. He is suddenly thrown into a room where he is mercilessly beaten. One of the men smiles, “Ward Meachum sends his regards…”. However, this is all Danny needs. When everything returns to focus, the men around him lie on the ground unconscious, and Danny’s fist glows gold. He shoves a guard out of the way, and makes a run for it. 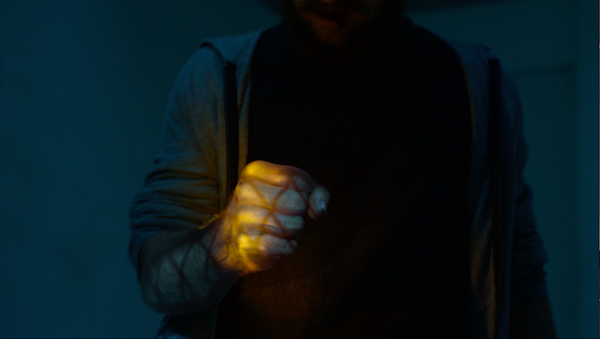 Subscribers can watch the entire first season of Iron Fist on Netflix.