Home » The Daily Bugle » Marvel’s Divided We Stand Has Some Very Interesting and Unexpected Players Involved!

Marvel’s Divided We Stand Has Some Very Interesting and Unexpected Players Involved!

Marvel released a new image today for something they are calling “Divided We Stand.” It is, apparently the aftermath of the currently in-motion story Civil War II, which sees Captain Marvel and Tony Stark in an ideological fight over the use of a new Inhuman, Ulysses, and his power to see the future — do you act on the predictions and change the future, or simply do your best to prepare for what’s coming.

For Stark, a Minority Report like state is the ultimate outcome, where freedoms are being taken away from people before they’ve ever done anything. For Captain Marvel, if they know destruction is coming, they are fools to not act on it to keep it from happening.

Marvel is taking care that this new chapter is not referred to as “an event” but is, as Marvel Editor-in-Chief Axel Alonso said to Fast Co-Create —

“It’s the status quo of the Marvel Universe in the aftermath of the war. It’s a glimpse as to whom we can point to in the coming year, with just enough ‘What the heck’s going on there’ spots to get people speculating. ‘There’s no Tony Stark in that picture, but who’s that guy holding the helmet? Is that Doctor Doom?’ ‘The young girl in the gray armor looks a lot like the new War Machine.'”

He cautions that they are not lining up for a fight, which, with a name like “Divided We Stand,” seems to suggest that these heroes all have different opinions on how to use this Inhuman pre-cognitive power and have decided to let the other factions act as they feel they must. That is to say, “live and let live.”

He then goes on to explain the thinking behind the apparent randomness of the picture and groupings, which include supremely obscure characters like Foolkiller, Slapstick and Solo, while also including newer characters like Mosaic and Riri in her newly made armor suit.

“They’re all there because they matter. They’ll either be in a solo series, or they’ll be a key member of a team, or they’ll do something that you will be talking about in a Marvel book that will bring them into a position of prominence. They’re there for a reason. Including that big, big, big what appears to be a Godzilla foot.”

So, just who are all these characters?

We’ve got one sentence on each of them to help you out! 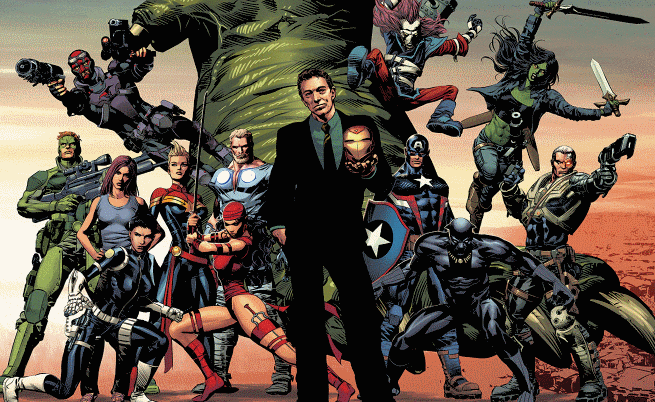 The first group, on the left.

Doctor Doom is in front, holding Iron Man’s mask. After the events of last year’s Secret Wars event that completely changed the landscape of the Marvel universe, Doctor Doom, the hyper-intelligent, egotistical, narcissistic techno-magic adept despot of Latveria turned over a new leaf and is now trying to be a good guy to make up for all his past evils.

Foolkiller — red mask, two guns, flying through the air, he’s part of Deadpool’s current team, the Mercs for Money. He is a strong fighter and has two “purification” guns, which are basically just disintegration rays.

Solo  — the dude in green with the sniper rifle, he’s another part of Deadpool’s Mercs for Money team, he’s an adept solider and fighter with very limited teleportation powers, similar to Nightcrawler, but on a smaller scale

Jessica Jones — wife to Luke Cage, a private investigator who is super strong, can fly and has survived the overtly-sexual manipulation a of the Purple Man.

Captain Marvel — Col. Carol Danvers, half-Kree/half-human with powers of flight, strength and energy blasts. She is leader of Alpha Flight, the agency responsible for vouchsafing Earth from extraterrestrial threats.

Thor Odinson — Thor Classic, who lost his Mjolnir worthiness during the events of Original Sin. He’s been MIA since Jane Foster took over as Thor.

Elektra — an assassin and leader of The Hand, who typically runs around with her on-again/off-again boy toy, Daredevil.

Slapstick — He’s been a New Warrior, he was part of The Initiative and now he’s on Deadpool’s Mercs for Money, Slapstick is basically a cartoon character come to life who can warp reality around him, is virtually indestructible, can change his shape and works within the realm of “cartoon physics.”

Gamora — the deadliest woman in the galaxy, she is a proficient fighter, step-daughter to Thanos and runs around with The Guardians of the Galaxy.

Cable — an exceptional soldier typically seen as the leader of the mutant group, X-Force, he is the time-traveling telekinetic son of Jean Grey and Scott Summers from the future

Black Panther — T’Challa, the king of Earth’s most advance country, Wakanda, and a fighter so proficient he’s on par with Captain America. Also, his country mines Vibranium, the hardest, most durable element known, so his suit is made of that.

Now, for the opposite side… 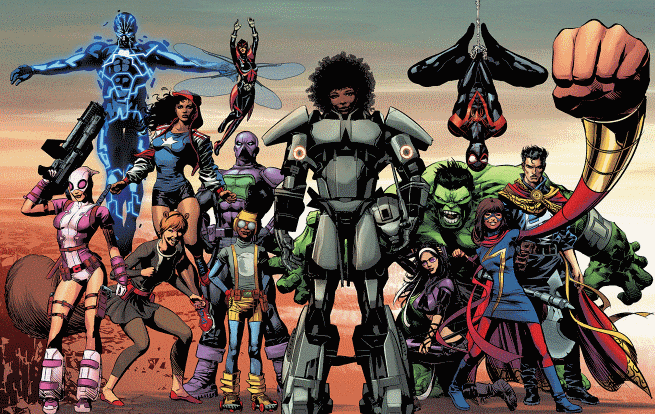 The opposite side features a new character, Riri, standing in front, wearing a suit of armor she built herself. She appears to be the new War Machine, as the old one, Col. Jim Rhodes was killed by Thanos. Not much is known about this character as she just started appearing in the comics.

Mosaic — we haven’t even met this character yet, so all we know is what the Marvel website tells us, and that is he is an Inhuman who can jump from person-to-person like a ghost. He can control the bodies and memories of those he inhabits, but has no body of his own.

All-New Wasp — Nadia Pym, step-daughter to Janet Van Dyne, the child of Hank Pym and Pym’s first wife, Maria Trovaya. Her backstory is already complicated and she was just introduced, but she’s basically the Wasp.

Miss America — America Chavez, past member of the Young Avengers, currently serving with A-Force and Ultimates, she’s an inter-dimensional traveler with exceptional strength that borders on magical. Also, she can fly. And also, she can jump between dimensions.

Gwenpool — She is, basically, a Marvel Comics super-fan who found herself somehow transported into the actual Marvel Universe. Much like Deadpool, she’s unsure what is real and what is not and has no real super powers.

Squirrel Girl — Doreen Green, recently discovered to not be a mutant, she has the powers and agility of a squirrel, can talk to squirrels, commands a squirrel army and is unbeatable.

Prowler — the brother to Jefferson Davis, the father to Miles Morales, Aaron Davis is a career criminal who uses advanced technology in all his heists, such as his vibro-shock gauntlets which emit sonic waves.

Moon Girl — a very intelligent young girl named Luella Lafayette, she came across Devil Dinosaur while he was seeking revenge for the death of Moon Boy. She has the Inhuman gene, but does not want to change, so she is trying to stay away from that damn Terrigen cloud.

Spider-Man (Miles Morales) — you know the original Spider-Man? He’s basically that, but with the power of camouflage and venom blasts as well as a different background that includes loving parents that are still alive.

Totally Awesome Hulk — You know the Incredible Hulk, right? Bruce Banner, so this character is like him, but is actually Amadeus Cho, the fourth smartest human on the face of the planet, who used some nannies to absorb Bruce Banner’s Hulk-powers.

Ms. Marvel — Kamala Khan, an Inhuman and a Muslim who can change the size and shape of her body.

Hawkeye (Kate Bishop) — you know the original Hawkeye, Clint Barton, workd’s greatest archer — she’s basically him, right down to the sarcasm, but younger, prettier and with wealthy parents.