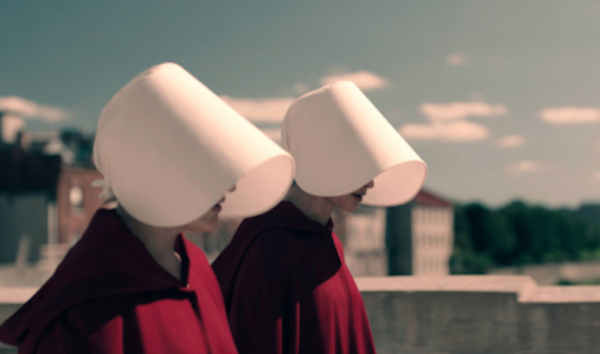 Author Margaret Atwood is 77 years old and she’s experiencing a bit of a revival.  In an interview with Entertainment Weekly that was released Friday, she discusses her inspiration for and impressions of the new The Handmaid’s Tale series on Hulu.

Atwood talked in the interview about her experience in West Berlin, her study of 17th century puritan culture, 20th century totalitarian regimes and love of dystopian sci-fi which all lead her to write The Handmaid’s Tale.  That knowledge brought her to the belief that “people who say they want to do extreme things will do them if they get the chance.”  and “that it will never happen here is never true.” And, those themes endure in the book and the series.

RELATED:  The New THE HANDMAID’S TALE Official Trailer is Here

Most notably, Atwood gives her impressions of Hulu’s version of her story.  She addresses the fact that the series will necessarily go further in the story than the book could.  Of her collaboration with show runner Bruce Miller, she says “I think it will be more involving in the second season because we will be in uncharted territories so more invention will have to take place.”  Three episodes in to the new series, there are few more exciting things than the thought of continued seasons and expansion of this terrifying, fascinating, beautiful horrible world she created.

You can see the first 3 episodes of The Handmaid’s Tale on Hulu now.  Following episodes will be streamed every Wednesday.  Watch it.