THE MAN IN THE HIGH CASTLE Recap: (S02E05) Duck and Cover 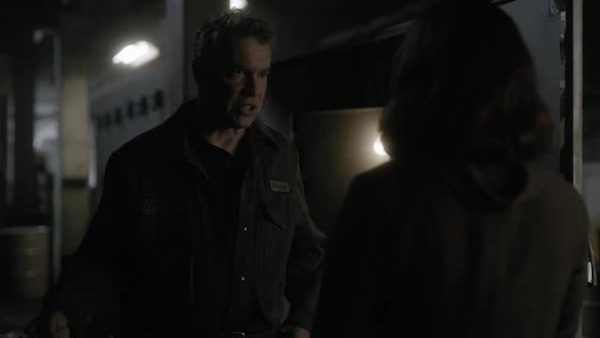 Once again, the Japanese Trade Minister, Nobuske Tagomi (Cary-Hiroykui Tagawa) finds himself outside the same house. This time, the same woman opens the front door. He says, “Michiko, I’ve dreamed of seeing you again”. The conversation is short however, as she leaves him, saying she has to go to work. On his own, he enters the house, slowly moving through the rooms. He goes through the kitchen, before picking up a dated photograph. He looks at himself, years younger in a military uniform. The same girl stands with him. She wears a frilly pink dress. Next, he flips on the television. There’s classic 1950s advertising. He then switches the channel, where a news story reports on the drama in Cuba. In fact, this seems like history as we’ve come to know it.

Meanwhile, back in the Reich, Juliana (Alexa Davalos) is on edge. As she speaks to George Dixon (Tate Donovan), he gives her advice. “Run away. Run far away”. However, as she mentions the Man in the High Castle, his tone suddenly changes. Instead, they plan to meet in Central Park.

The next day, George tracks down Juliana. They sit on an adjoining benches, talking covertly. However, he’s far from thrilled to see her. Not only did she give Joe (Luke Kleintank) the film, but he’s seen her visiting the Smith family. Juliana slowly mentions the film which The Man in the High Castle showed her. George is stunned. “What the hell are you talking about?”. As she delves into further detail, everything seems new to him. While they talk, the men from the train station suddenly materialize around them. This time, George calls them off. He looks over at her harshly, “Don’t make me regret this”.

Across town, Thomas Smith (Quinn Lord) talks nervously on the phone. He’s been jilted. The girl of his dreams is going to the school mixer with another boy. However, all conversation stops as John (Rufus Sewell) enters, and the family sits down to dinner.

Meanwhile, Frank (Rupert Evans) returns to the apartment where Childan (Brennan Brown) and Ed (DJ Qualls) nervously wait for him. Ed is not happy to see Frank. It turns out, Frank has been out the entire night, and it’s not a huge leap to assume what he has been doing.

Later, Joe prepares to leave Berlin. However, as he’s about to enter the airport, Martin (Sebastian Roche) quickly stops him. There’s something important Joe needs to see. Joe uneasily relents, and they drive to a rundown mansion. As they talk, Joe learns it was a hospital, and according to Martin it provided the Nazis with next generation of the S.S. elite. Martin looks at his son, “It was your birthing house, Joseph”. Suddenly, everything Joe has come to know isn’t true. He storms off, leaving his Father standing alone in a decrepit birthing room. As Joe see’s a crib, he collapses in tears.

George and Juliana sit in a car, playing a pirated radio station to disguise their conversation. The music is rock and roll. George reflects on the time before the war, telling Juliana this is what they’re fighting for. He tells her how New York was once a great city. In fact, San Francisco was too. But, the Resistance wants Juliana dead. However, there’s one thing that she can do. In order for the Resistance not to kill her, Juliana needs to get close to the Smith family.

Later, Joe returns to his father, who offers him a cigarette. While they talk, Joe asks if Martin ever really loved his mother. Not only did Martin truly love her, but he’s tremendously proud of the man his son has become. And if he wants to stay, there’s a tremendous amount of opportunity for Joe in Berlin. However, Martin will understand if Joe wishes to return to New York.

Meanwhile, Frank returns to see Sarah (Cara Mitsuko). As he enters the small apartment, Gary (Callum Keith Rennie) offers him a beer. There’s a moment of silence in the conversation, and Frank asks about the films. He’s seen the one Juliana had in her possession, and he watched himself be executed by the Germans. Frank is rattled. How can he possibly have watched himself be shot in the back of the head when he wasn’t? Gary and Sarah’s whole demeanor suddenly changes. “You were in the films?” Gary asks, but he only stumbles briefly. He steps closer to Frank, “We all die. The question is, do you want to die kneeling, or standing up?”

Later, Obergruppenführer Smith enters S.S. Headquarters where Inspector Kido (Joel de la Fuente) waits for him. The Police Officer is visiting on behalf of General Onada (Tzi Ma). The Japanese seek the extradition of Juliana Craine. As Obergruppenführer Smith offers him a seat, Kido tells the Nazis seemingly everything he knows. Smith seems uninterested until Kido mentions The Man in The High Castle. Despite Juliana’s insistence that she hasn’t met the man, according to Kido, she has. The two men talk, soldier to soldier. “Why are you really here?” Smith asks. Kido is silent, but the Obergruppenführer hits the nail on the head. There’s something the man isn’t saying. The screen goes black. Once he’s alone, Smith tells his assistant to wipe the meeting from their logs. It never happened.

As Juliana enters her apartment, she feels someone watching her. She scrubs down every inch of the room, but she can’t take her eyes off the air vent. Suddenly, a phone rings. It’s John Smith. He’s calling about dinner.

Meanwhile, Nobuske Tagomi walks the streets of San Francisco. He enters a bookshop.  Near-by, people talk about the bomb. There’s fear of Russia. Suddenly, he picks up a book. Flipping through the pages, there’s pictures of Iwo Jima, and the fall of Nazi Germany. He looks at the famous V-Day picture in Times Square. Finally, he sees a picture of the A-Bomb dropping on Japan. This isn’t his reality.

Joe and Martin return home. After their last emotional scene, things seem better between the two men. It turns out, Joe will now be staying with his Father for the next few days. They’re finally on speaking terms.

At the same time, Ed stands in the kitchen, washing his hands. The Sergeant waits for him in the living room. It turns out, Ed serves both sides. He looks at the police officer wide eyed, “I can be useful”. However, the Japanese do not seem convinced.

Later, Mrs. Smith wanders through her kitchen alone as her husband returns. She is not content, telling him, “…Apparently she (Juliana) is the most important thing in our lives right now”. The doorbell rings, it’s Juliana. He has invited her for dinner.

Meanwhile, Frank hikes through the woods with Sarah. Entering a clearing, they come across a flag draped box. It’s a Memorial for Karen. They stand quietly, hats in hand as they listen to a service for their fallen friend. As things come to a conclusion, Sarah looks to Frank, “You’re one of us now”.

Back in the Reich, Juliana sits through an awkward dinner with the Smith family. The children have never been outside the Reich, and excitedly question Juliana as to whether the Japanese eat dogs and cats in the Pacific States. However, the phone rings, interrupting conversation. John answers, it’s Joe. He questions John as to whether he knew Joe was “Lebensborn”, which John admits to knowing. However, it wasn’t his place to tell him. Joe slams the phone down, terminating the conversation.

Later, a resistance truck pulls up in front of an abandoned barn. Lem (Rick Worthy) paces, but is calm as the door swings open to reveal the Man in the High Castle (Stephen Root) inside. Lem picks up a stack of film reels for him. Unspooled strips spill across the floor. While they prepare to leave, Hawthorne looks inside the room, “Nothing like a good spring cleaning”. With that, he throws a match and the nitrate film explodes in flame. As the truck speeds away, a roll of film comes into focus,  THE GRASSHOPPER LIES HEAVY.

Finally, the Tagomi returns to the house. This time, Noriuke (Eddie Shin) is present as well as Michiko. As the young man asks Nobuske about disrespecting their mother, it’s suddenly clear, he’s Tagomi’s son. While the conversation comes to a head, Noriuke calls out, “He’s back honey!”. There’s a moment of silence as Juliana steps out of the kitchen, a screaming baby in her arms.

The first two seasons of The Man in the High Castle can be watched with an Amazon Prime subscription.