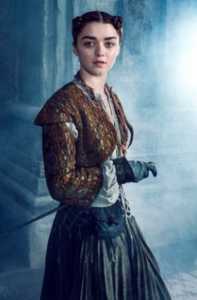 In case you don’t know me, I love Game of Thrones.  I loved the books.  I love the show.  And, I love, above all characters, Arya Stark.  She’s fierce, she’s true, and she’s dangerous and I love her.

Maisie Williams, who plays Arya, has finally gotten an Emmy nomination, she’s getting some well-deserved attention and gave an enlightening interview to Variety recently. 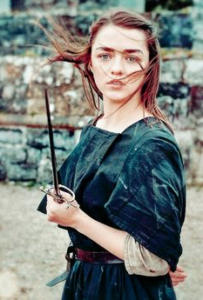 In the article, Williams discusses Season 6, referring to herself as a ‘Stark CIA Agent’, which I LOVE.  There’s no doubt that her newly acquired skills make me wonder if she’ll be the Stark’s secret assassin in Seasons 7 and 8.  She talks about the in’s and out’s of killing Walder Frey, who she wants to kill next, and gives her take on ending the series with short seasons.  ‘It sucks for the audience because they love the episodes, but what we’ll never do on this show is drag it out, and I’m so thrilled about that.’

Williams will be seen again in Game of Thrones Season 7 sometime in 2017.  All men must die.  Bring it, Arya.