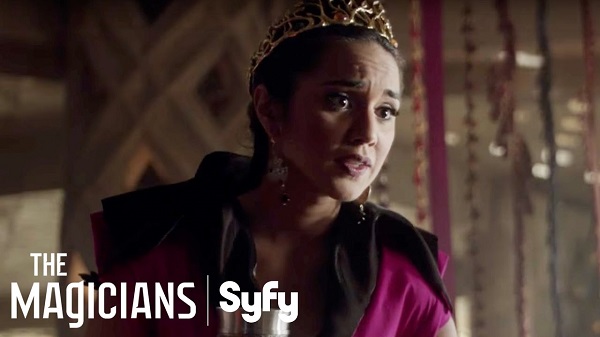 Remember when Quentin shattered the only thing that could contain Niffin Alice and set her free? Well, this sneak peek for The Magicians episode 10, “The Girl Who Told Time,” will show us the repercussions of Q’s actions. Mostly Margo giving all the sass, possibly replacing Marina (RIP) as my Sass Factory (it’s a factory of sass). Quentin is being “Emo Quentin,” lounging around the throne room in Castle Whitespire, laying his feet all over the High Queen’s royal seat. After three months of enduring Q’s mopey attitude, Margo gives him what I like to call the “Come to Jesus” talk. Basically, he’s receiving an overabundance of tough love from our High Queen.

Meanwhile, Sass Factory Margo also has to handle Eliot, as he phases into Groomzilla territory. If you recall, Eliot discovers in the previous episode that as inhabitants of an otherworldly realm they can take a lover of each gender – a husband and a wife. Eliot, instead of slaying King Idri in battle, decides to marry him instead. Fine line between love and hate indeed. We see him banish someone forever because of minute details, in the nonchalant manner that only Eliot can master.

Then, we see Margo plead with Quentin to grab the torch and take up Eliot catering duties. She, of course, plans to spend some time in solitude, “rubbing one out.” Ah, Margo. Never change.

Will Quentin finally snap out of his funk and help his friend? Can Eliot manage to hold a wedding ceremony without firing his entire staff? Also,what the hell is up with Penny and his Neitherlands library gig? I want to see our boy work the books. Lastly, will Margo finally be left alone for personal fun time?

Watch the sneak peek below for a glimpse into next week’s episode! It’s sure to be a magical, tasty, ice cream sundae of a treat.

The Magicians airs Wednesdays at 9pm on your SyFy affiliate.