Home » Movies » Magical Fantastic Beasts and Where to Find Them Trailer Brings Back the Wizarding World That We’ve Missed So Much!

Magical Fantastic Beasts and Where to Find Them Trailer Brings Back the Wizarding World That We’ve Missed So Much! 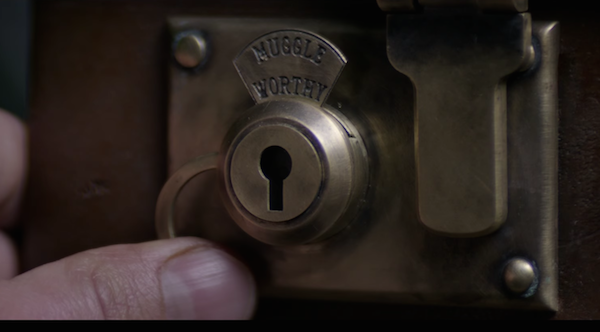 The MTV Movie Awards this past weekend was a gift for nerds that kept on giving. The show premiered new trailers including Suicide Squad, Captain America: Civil war and Fantastic Beasts and Where to Find Them.

Harry Potter fans, including myself, squealed with delight after seeing the trailer for Fantastic Beasts and Where to Find Them. In the trailer, The Wizarding World is in full swing except this time around it’s 1926 and the story takes place in New York City. Fantastic Beasts and Where to Find Them is part of  three films set to be released in 2016, 2018 and 2020 – all based on J.K. Rowling books.

The story follows Newt Scamander played by Eddie Redmayne. Newt was expelled from Hogwarts for “endangering human life” with a creature. We learn in this trailer that Albus Dumbledore fought against his expulsion! Newt and his mysterious suitcase travel to New York City where the adventure begins.

The suitcase that Newt carries is as mysterious as it is fun. We see claws opening the suitcase from the inside, we see Newt step in the suitcase and descend into it (it’s bigger on the inside!) and we also see that it has settings! It can be switched to “Muggle Worthy” so that Newt can get through NYC customs without raising any suspicion.

Colin Farrell is in top form as Percival Graves. Graves is a wizard who is concerned about Newt and his magical suitcase. There’s also political machinations aplenty in the trailer and much fun magic that we’ve all grown to love in the Wizarding World.

RELATED:  The First 8 Spellbinding Images from ‘Fantastic Beasts and Where to Find Them’ – A Film in the Harry Potter Universe

RELATED: J. K. Rowling’s Fantastic Beasts and Where to Find Them Announcement Trailer Lets Us In on the Magical Mystery

Newt Scamander arrives at the Magical Congress of the United States of America (MACUSA), for a meeting with an important official. At this meeting is a magically expanded briefcase which houses a number of dangerous creatures and their habitats. When the creatures escape from the briefcase, it sends the American wizarding authorities after Newt, and threatens to strain even further the state of magical and non-magical relations. The mistake has a devastating effect on the state of Wizarding/No-Maj (the American term for a non-magical person) relations in New York City’s community of wizards and witches in 1926, which is already in a dangerous place, due to the threatening presence of the fanatical New Salem Philanthropic Society, an extremist organisation dedicated to the eradication of wizard-kind. Newt battles to correct the mistake, and the horrors of the resultant increase in violence, fear, and tension felt between magical and non-magical peoples (Muggles). ~Wikipedia