We jump right back into the action in season two, episode nine of Luke Cage entitled ‘For Pete’s Sake’. Luke (Mike Colter), Misty (Simone Missick), Mariah (Alfre Woodard), Reverand Lucas (Reg E. Cathey), and Tilda (Gabrielle Dennis) hiding out at an as of yet nonfunctional Rand Pharmaceuticals building. Mariah isn’t convinced that Luke could possibly know Danny Rand, but Luke opens the door with a code, rather than his fists, and Misty secures the building. After Luke’s father has led them in a prayer, Tilda sits down with the reverend to bandage his hand that is still cut and bleeding from the fight at the church. He marvels at her skills and tells her that he has faith in Luke to get them out of this situation. As she listens to the sounds of Mariah yelling at Misty and Luke, she can’t say she has that same faith in her mother.

Mariah and Luke are trying to reason with Mariah by offering her a reduced sentence. If she testifies that Bushmaster (Mustafa Shakir) tried to kill her they can take him down. It’s not until they point out that he tried to kill Tilda as well that she starts to waver. She says she’ll testify if she can get immunity for the guns. No pleas, she is off free. Luke tells her Shades (Theo Rossi) won’t be included, but she brushes it off and says he can take care of himself. Neither Luke or Misty like the idea, but getting her comfortable and free of the gun charges, and trying to get her on something unrelated may be their best bet.

Back at Mother’s touch, Bushmaster investigates the damage. After he discovers that Tilda took the nightshade with her, he ups the bounty on both her and Mariah’s heads to three million each.

In the meantime, Misty has returned to the precinct to find that the new brass is in town. Deputy Chief Priscilla Ridley (Karen Pittman) has come on board to take Ridenhour’s place for the time being. Once they’re alone, Misty sells the immunity deal to Ridley through gritted teeth. It’s hard for her to sell this, but Ridley commends her for having grown, for playing the game at a higher level and having advanced.

At the makeshift safehouse, Luke and his father are sitting down for coffee and discuss the burden that comes with the decisions he has made. They discuss Clare (Rosario Dawson), and the way that his father has handled his stress and concern in the past. His father also praises Tilda for having healed him so quickly by “working them roots”. Luke realizes that there may be something else behind Tilda’s healing than he initially thought. After his discussion with his father, Luke goes to find Tilda, who is deep in her research. She admits that she thinks that Bushmaster used the ingredients that she sold him to strengthen himself. She tells Luke that she will tell him everything she knows about Bushmaster, but in return he has to tell her everything he knows about Mariah.

The DA has put through the paperwork for Mariah’s immunity, and Ridley talks it over with Misty. Misty is reticent, remembering how she laid into Ridenhour over trying to offer Mairah a reduced sentence, and now she is going to offer Mariah full immunity. They agree that this is the best course of action though, and Misty tells her where she has to go to get Mariah. From the other side of the interrogation room glass, Nandi (Antonique Smith) is listening.

At Harlem’s Paradise, Bushmaster is hurting for Nightshade. He tries to convince Anansi (Sahr Ngaujah) again that he needs the nightshade. Again, Anansi refuses to help. The word has gone out about the upped ante on Mariah and Tilda’s heads, but nobody has taken it. That is, until Nandi walks in, asking if Bushmaster’s offer is still good.

In the safehouse, Mariah steals the Reverand’s phone to call Shades, since Misty took hers. Shades ignores the call, leaving Mariah even more frustrated when Tilda finds her. Tilda says she wants to know the truth, wants to know when there will be a day with no surprises. She tells her mother that she thinks Mariah hates her because her father’s genes skipped her, along with his light skin and green eyes. Mariah tells Tilda in no uncertain terms that not only was the man she thinks was her father isn’t, but that the Uncle Pete was the one who got her pregnant. She tells Tilda why she murdered Cottonmouth and drops the cherry on top of the cake that even though she has tried, she doesn’t love Tilda, and never has. She leaves Tilda sobbing and alone in the hallway, to go sign her immunity agreement which Misty has just delivered.

When Misty gives Ridley the clear, a swat team enters Harlem’s Paradise but finds no one. This is around the same time that a convoy begins to pull up to the Rand Pharmaceuticals building. Bushmaster calls for Luke to give them Mariah and Tilda and everyone else can go home, there’s no reason for the people Luke cares about to get hurt. When there is no response, Bushmaster takes the guns that Mariah sold him and opens fire.

A full on battle ensues, with everyone involved, from another throwdown between Bushmaster and Luke to Mariah picking up a heavy duty automatic weapon and fighting her way through the back of the building — and more than a few of Bushmaster’s men. By the time the police arrive, Mariah disappeared and Bushmaster has been beaten almost unconscious by Luke. Luke puts his target on Mariah’s back next.

When the police van carrying Bushmaster pulls in to the parking lot of the precinct, he detonates a hidden, palm-size bomb that he had concealed during the ride.

Mariah is wandering down the street carrying a weapon that is almost half as big as she is when Shades pulls up. His present to her? Anansi in the trunk of his car.

Tilda has made her way back to Mother’s Touch, only to find Bushmaster waiting for her, bleeding, almost dead, asking for help.

RELATED: Get caught up on all of our Luke Cage recaps here! 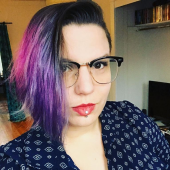