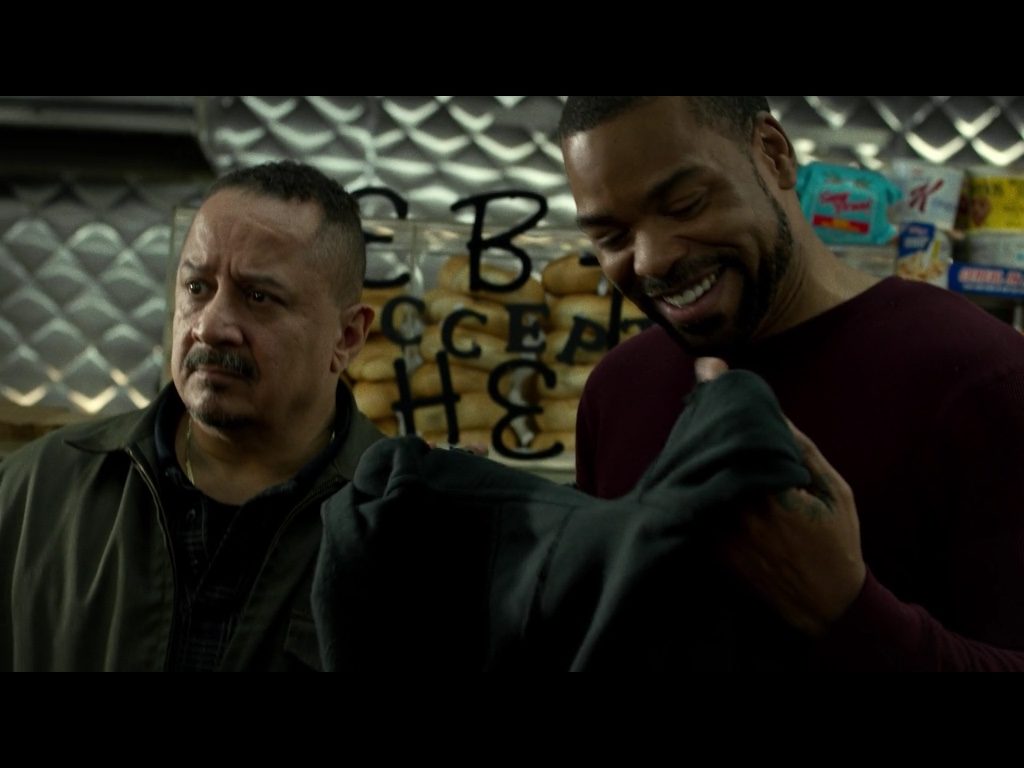 The penultimate episode of Luke Cage’s first season was pretty epic, and it took A LOT of discipline for me to sit down and write this before watching the finale. (I didn’t want to dilute my excitement by knowing how it all turns out.) But wow.

The action picks up exactly where we left off in episode 11, with Luke being shackled by defensive cops ready to put him in the paddy wagon. Misty sees an opening and talks one of her colleagues into letting her talk to Luke. She delivers a loud speech that sounds like she’s putting him in his place but actually gives him a complete update on the fact that the police aren’t looking for Diamondback, that Claire is in the wind and that all the cops on his detail have Judas bullets. She also says that he *shouldn’t* try anything before he gets to the precinct. 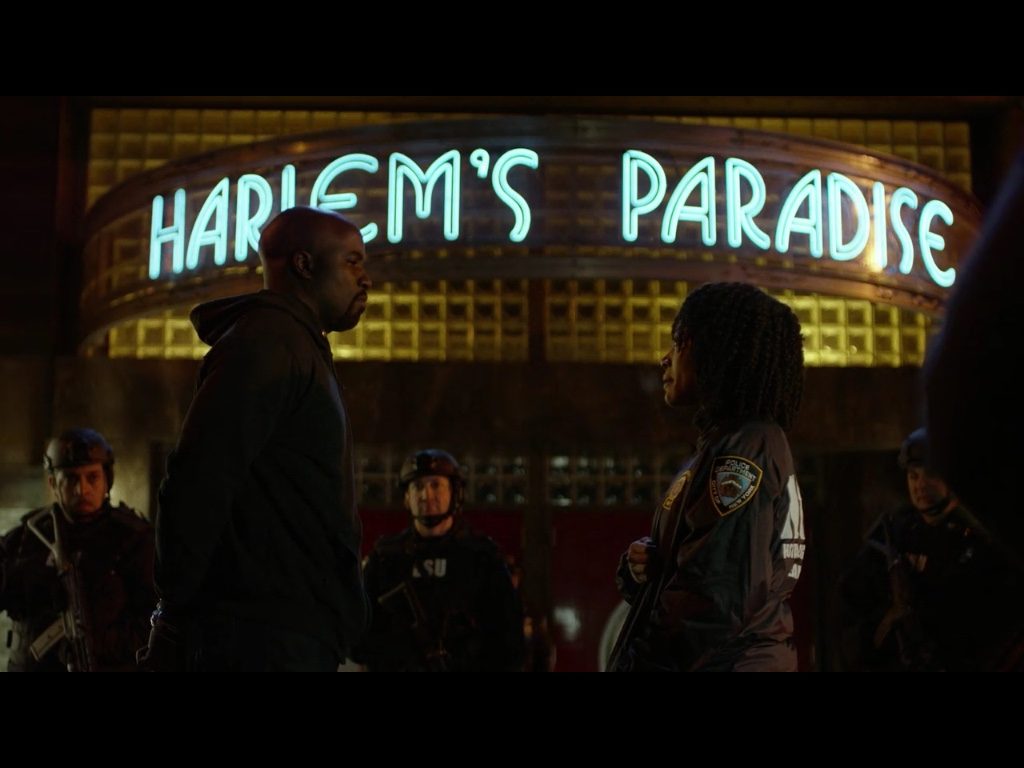 While racing away with Luke in chains, the driver of Luke’s paddy wagon and his partner have some banter about everything that’s going on in the world. They are exchanging some “locker room talk” when Luke effortlessly breaks through his restraints and the door and escapes. 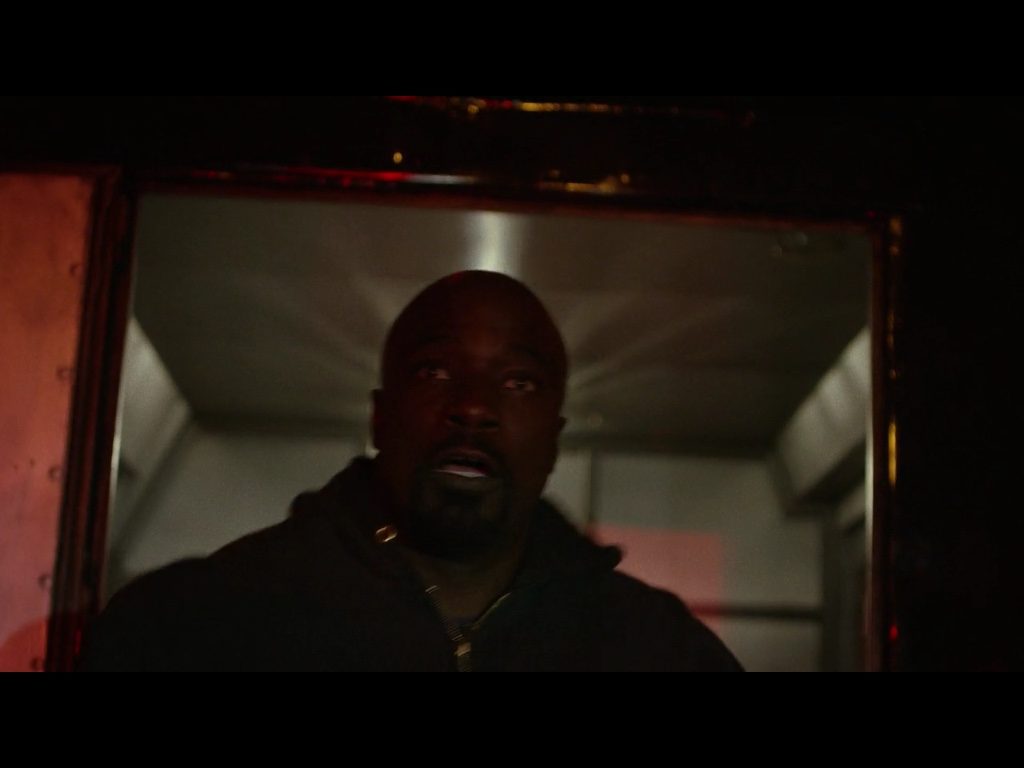 He is making a run for it when the driver of the paddy wagon corners him and talks to him long enough to decide that Luke is a good person, especially since this cop was a regular customer at Pop’s forever. He lets Luke go and tells him that there are a lot more people rooting for him than he might think. 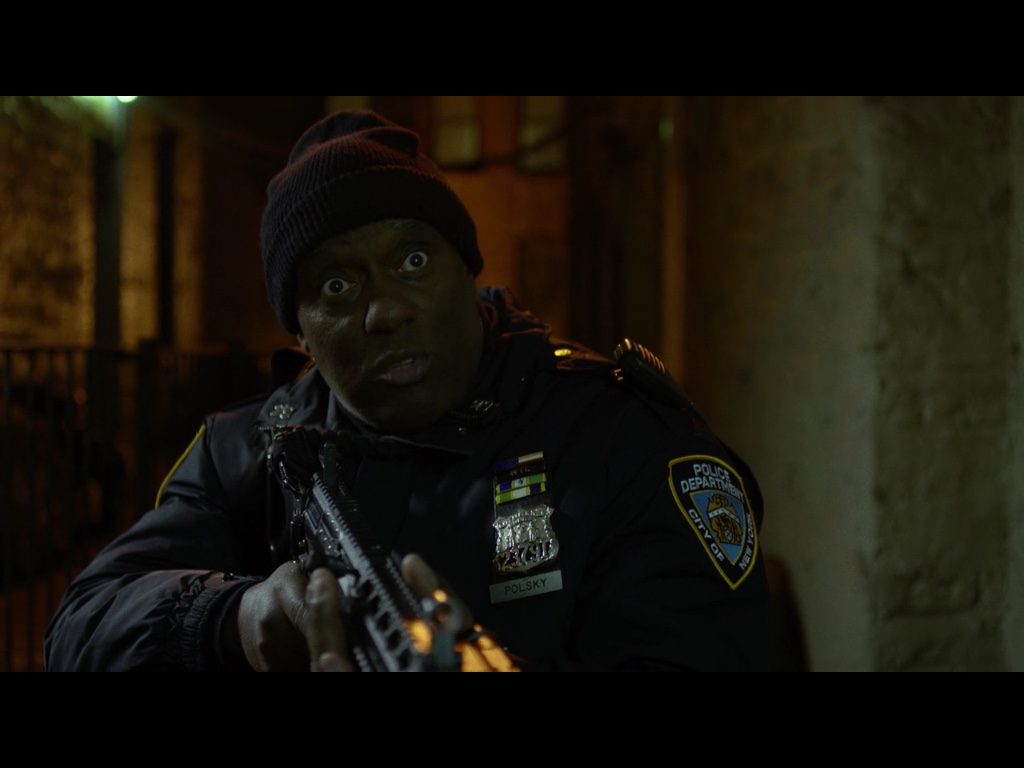 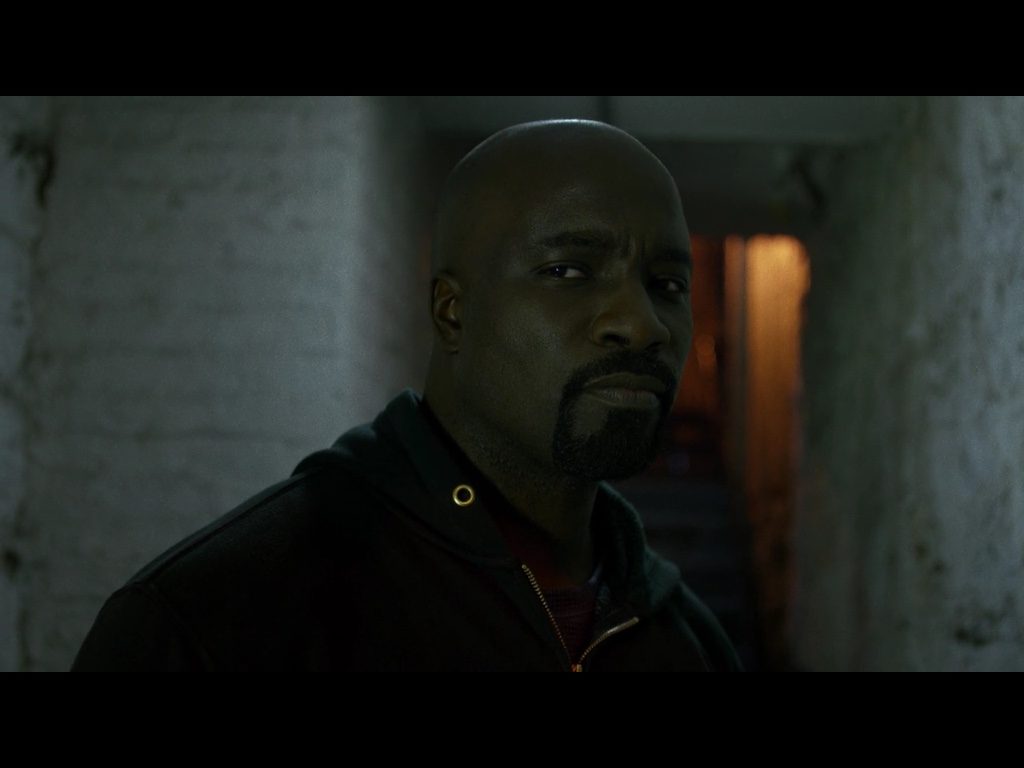 The next day, fugitive Luke is furtively walking down the street when he sees two baddies pull down ski masks and head into a bodega to rob it. 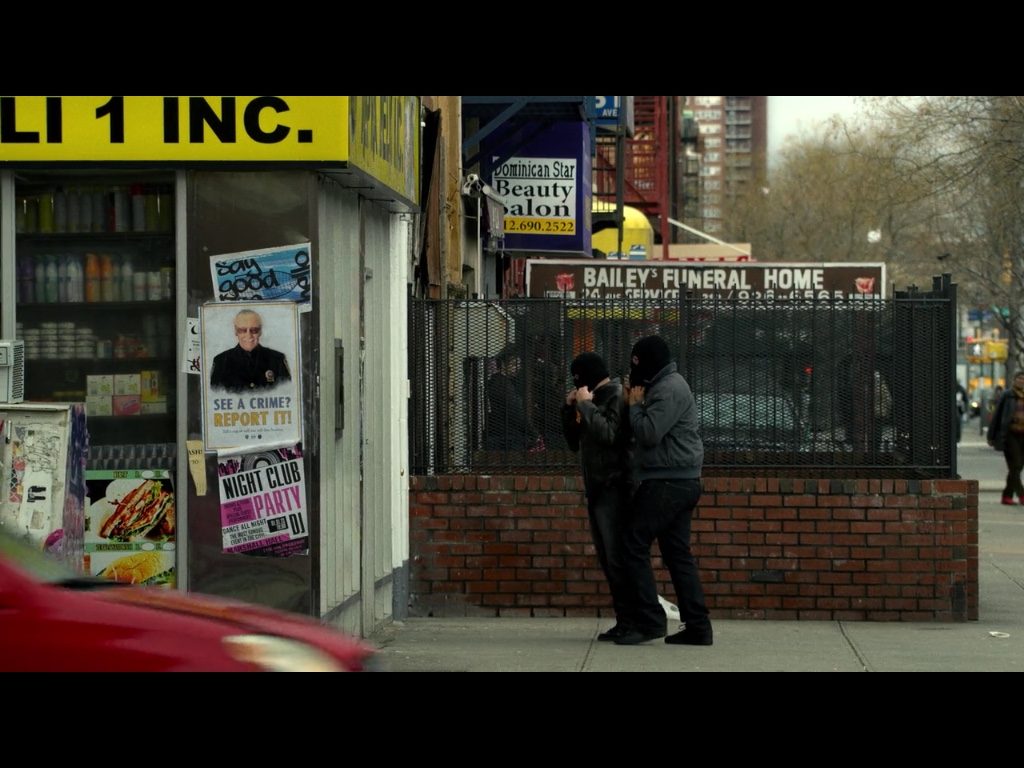 He laments the obligation he feels to do good, then follows to disrupt their robbery, encountering the masked men inside juggling emptying the cash register with an attempt at conversation with the bodega owner and METHOD MAN! 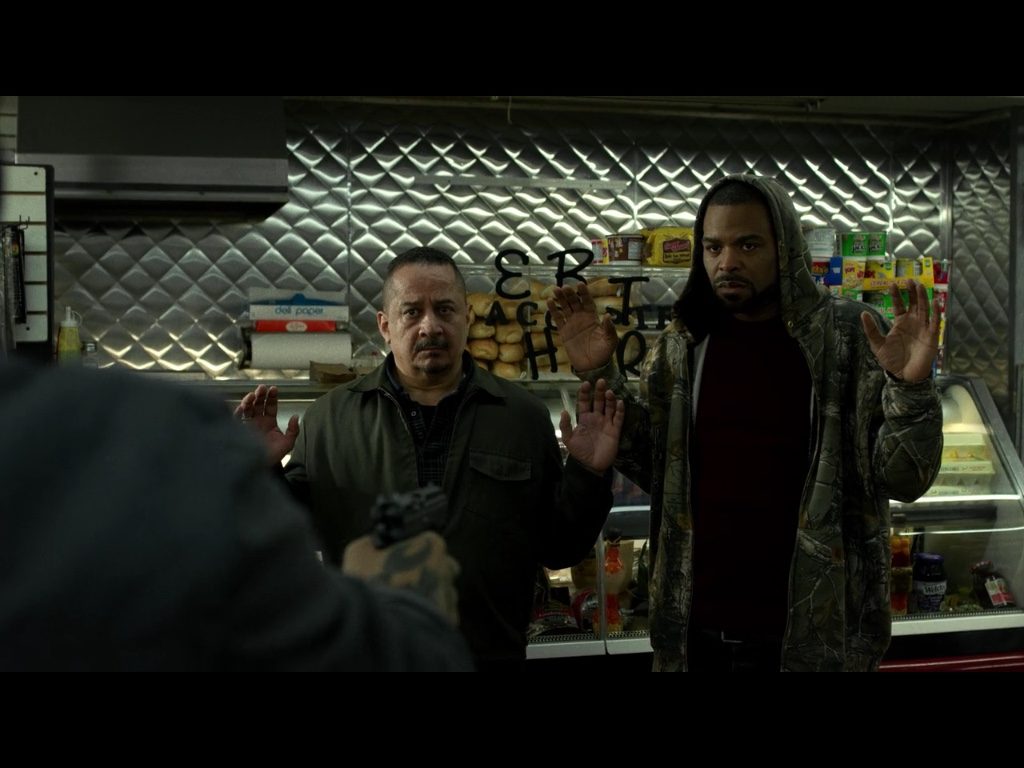 Luke comes in and basically flicks the robbers on the heads (like: bink!) to knock them out, makes a phone call using one of their phones, then exchanges compliments and hoodies with Method Man before heading out. 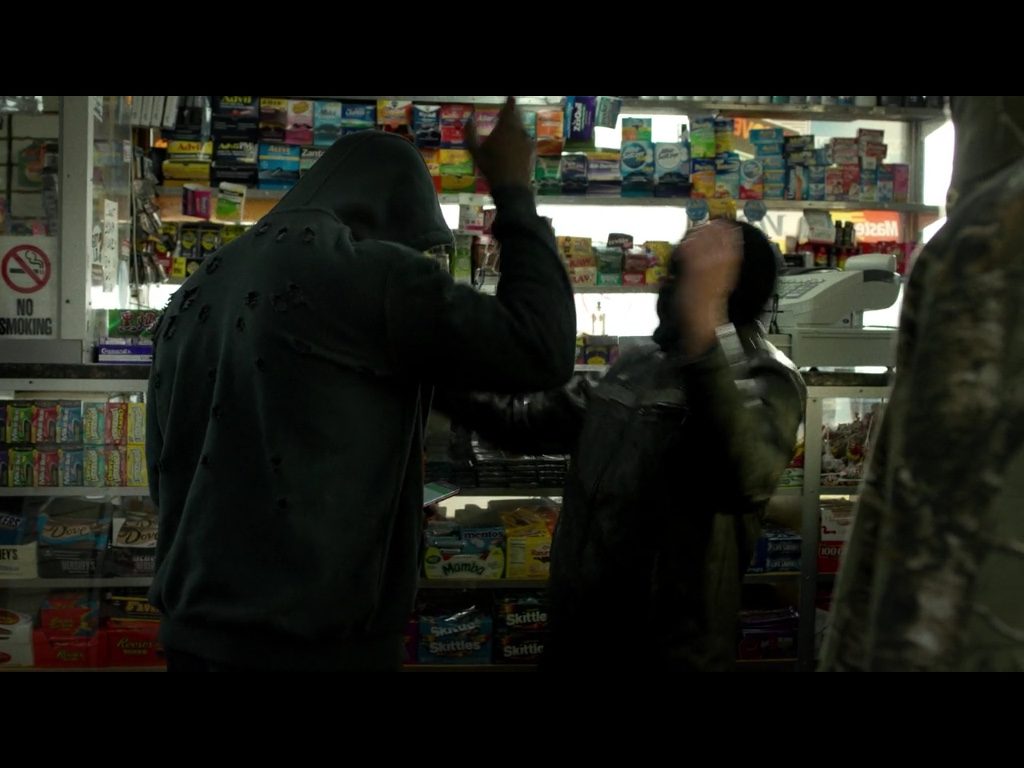 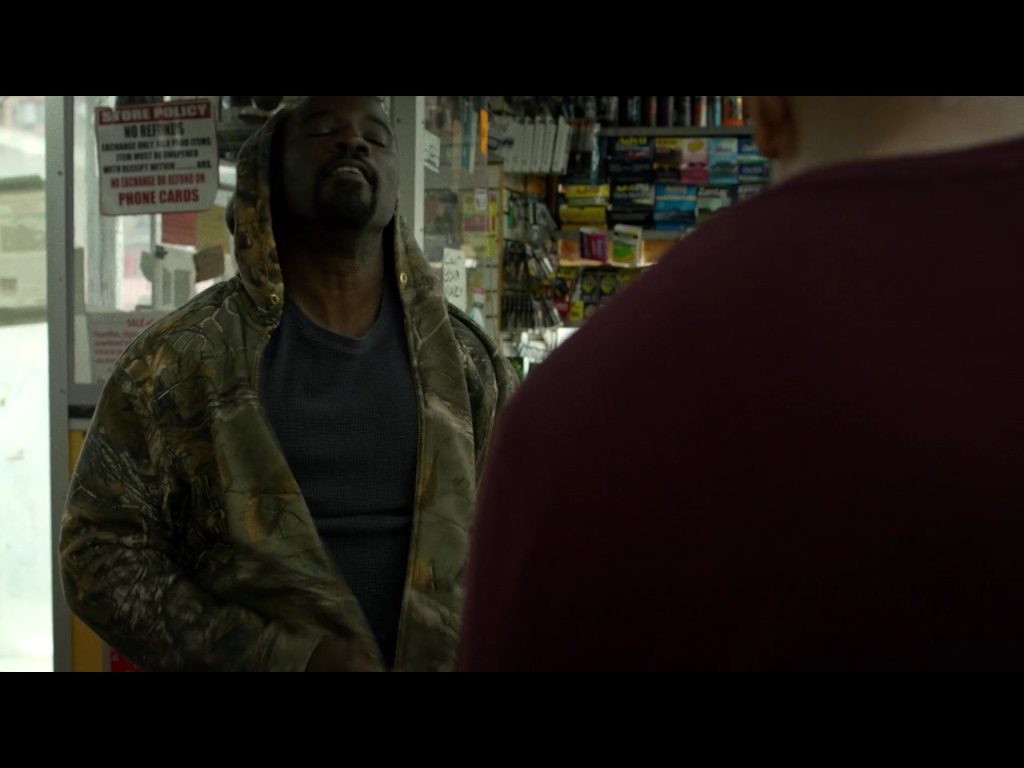 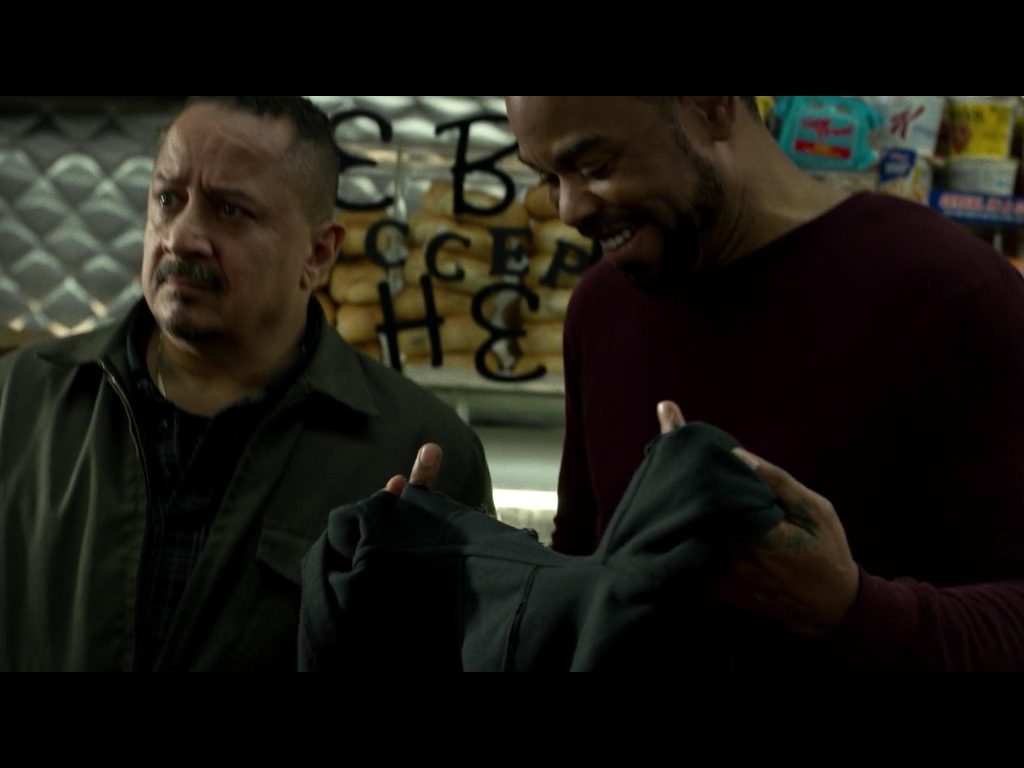 Method Man, beloved member of the Wu-Tang Clan, appears on a radio show afterwards, where he describes seeing bullets bounce off of Luke as he stopped the crime, then shows off his new, bullet-hole-riddled hoodie. 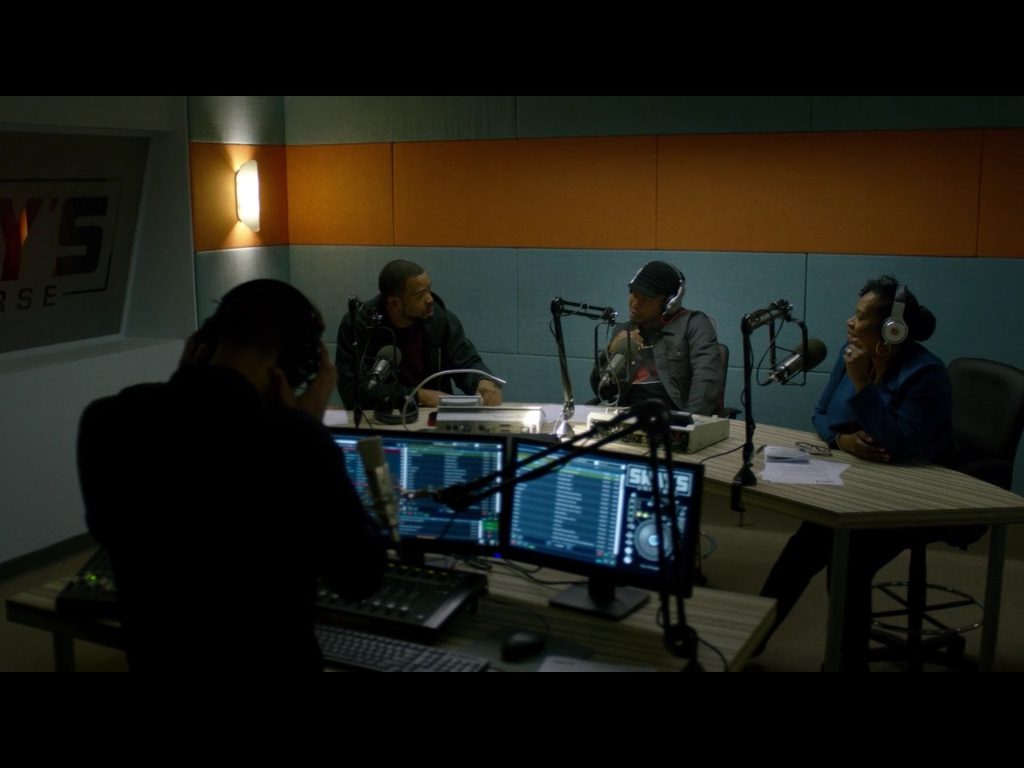 He drops a brand new rap about Luke’s “bulletproof love,” and apparently by the time the radio show is over, bullet-holey hoodies are THE fashion in Harlem. 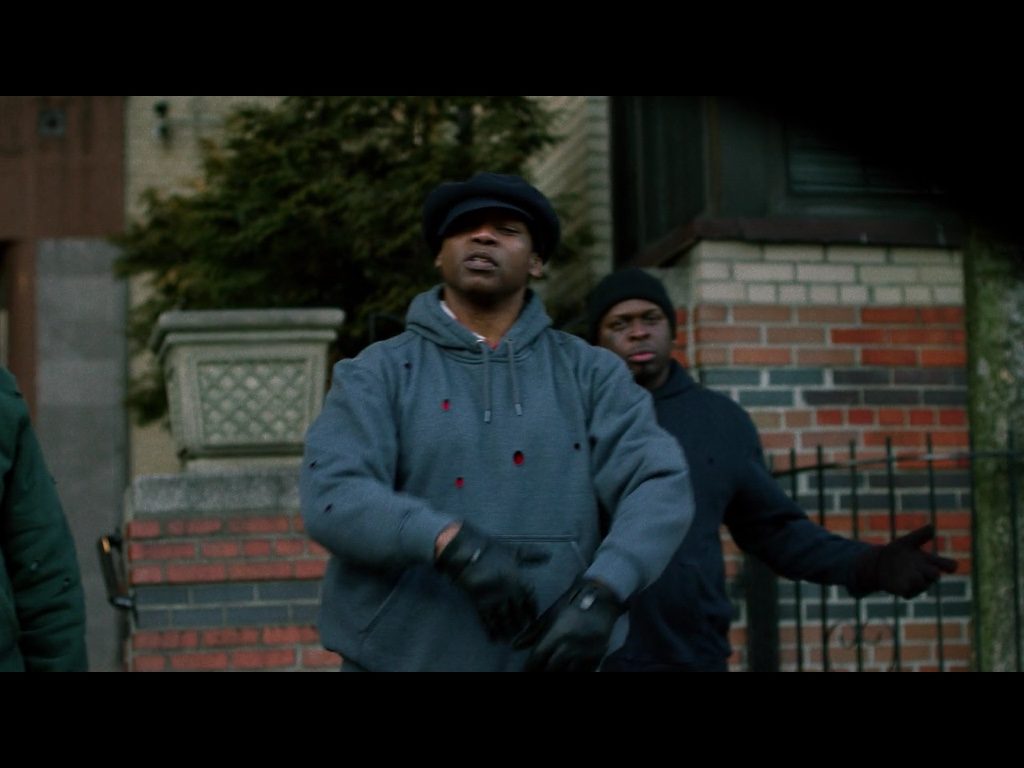 Meanwhile, Diamondback is liquidating his assets. He’s sold off a ton of his weapons stock and has a giant table full of cash in his warehouse. After teaching Zip an important lesson about not asking too many questions (by strangling him almost to death), he makes it clear that Shades asked too many questions in the last episode and that Zip can move up in the organization, if you know what I mean. 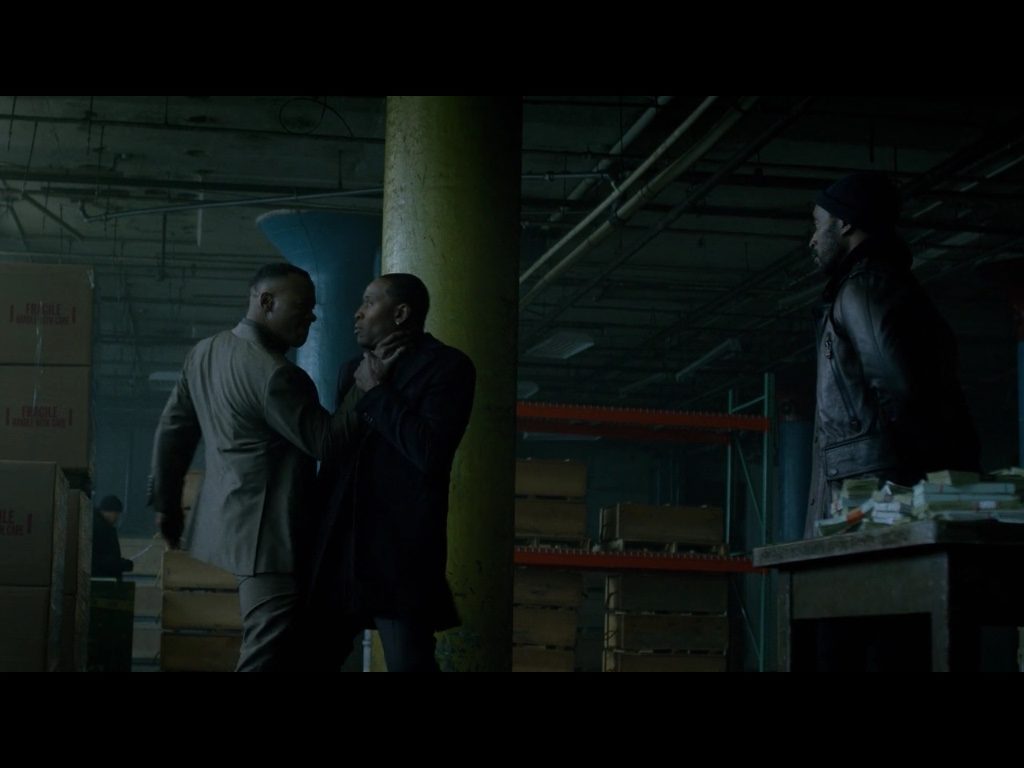 Turk resurfaces at this time, ready to do some arms dealing business with Diamondback. As Zip is walking him out, Turk tells him that “Romeo” would be ashamed of him. (Who is Romeo?) 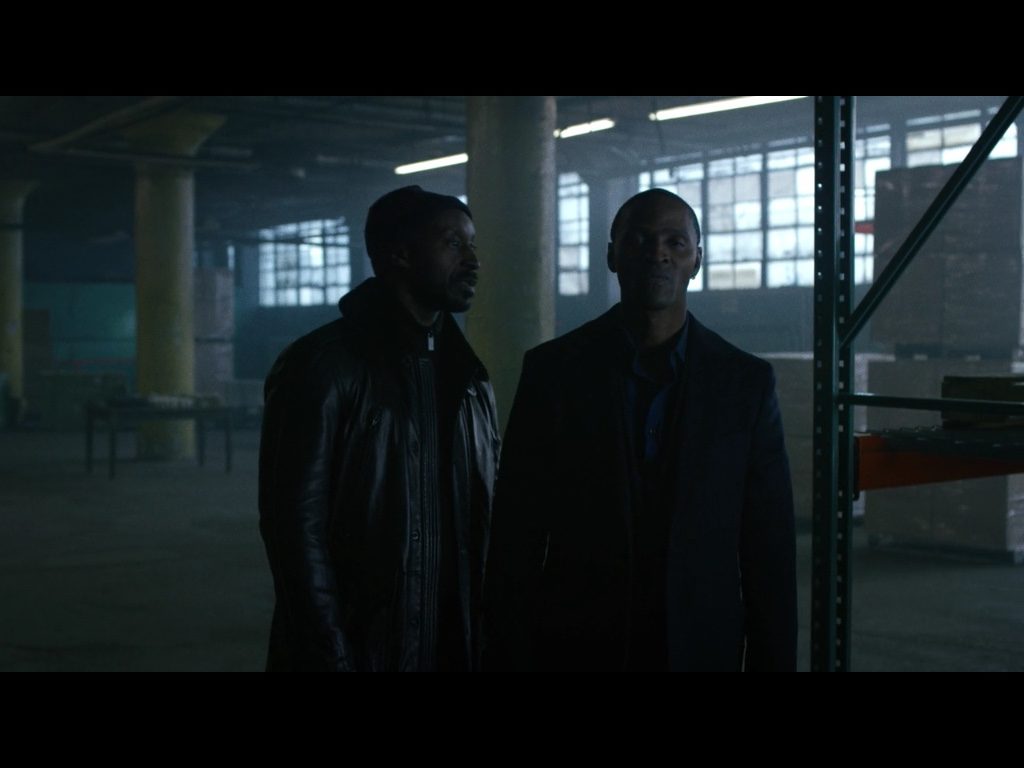 Shades isn’t the only one questioning Diamondback’s authority. Domingo and his cronies are done dealing with him and decide to go kill him and take all his guns. (Good luck, fellas.) 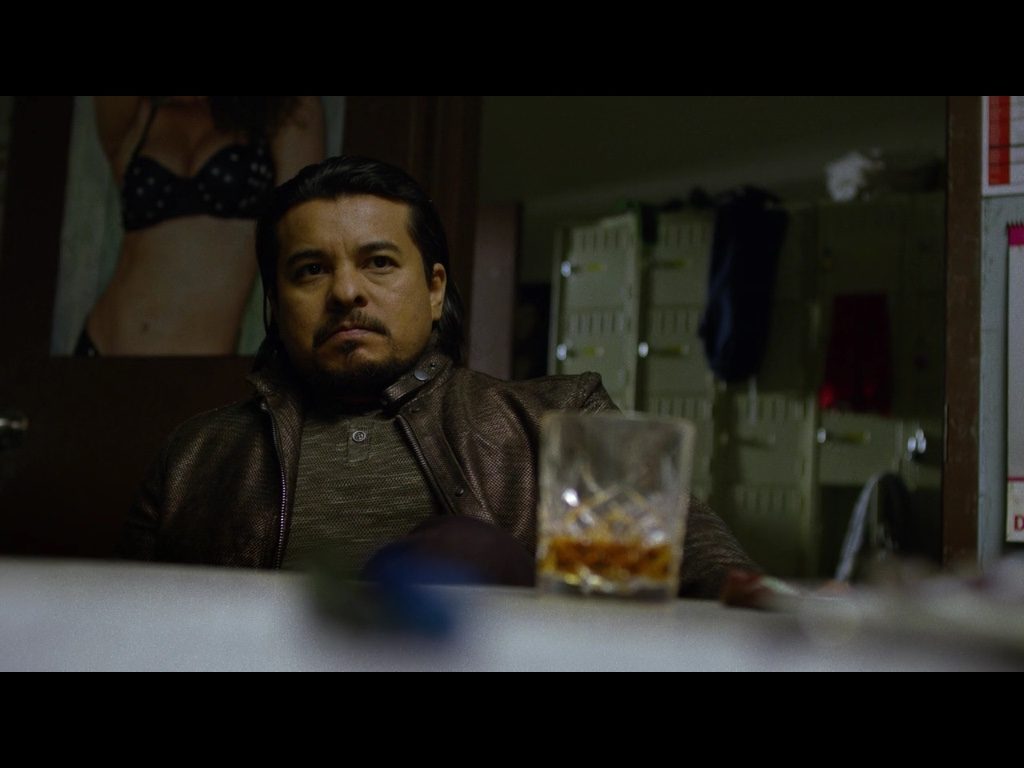 Back at the police station, a smug Shades is just chilling, confident that someone will be bailing him out shortly. 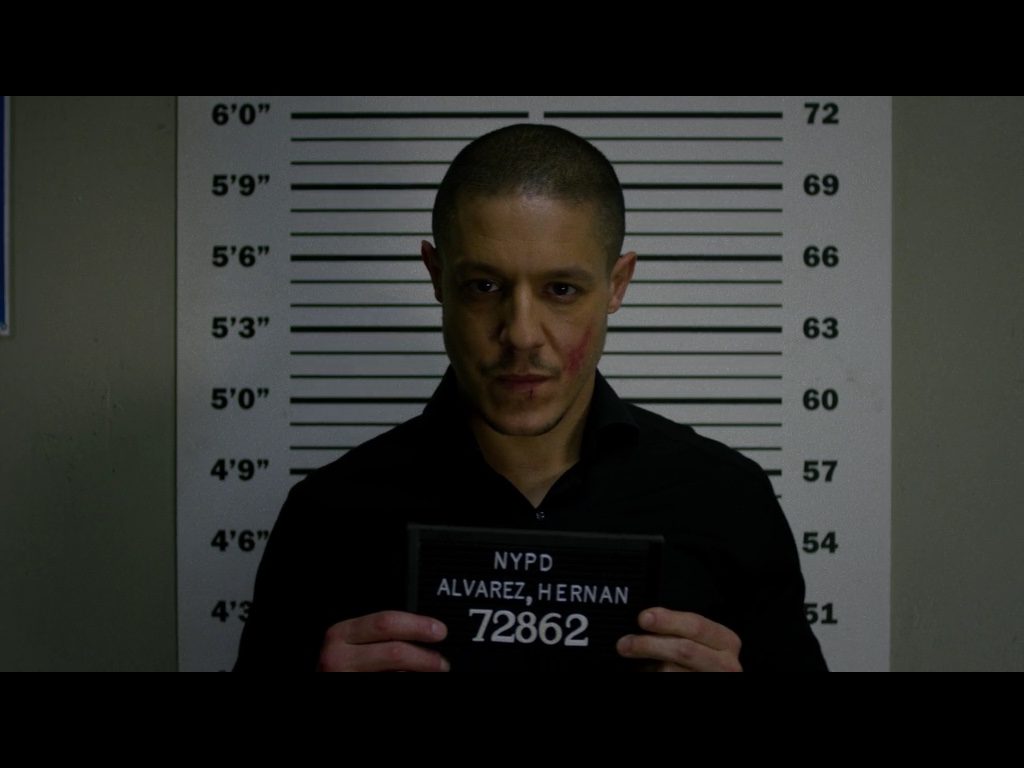 Inspector Priscilla won’t let Misty interrogate him, choosing to do it herself. She does a pretty terrible job, and Shades successfully keeps his silence until a lawyer arrives and someone pays his $2M bail. 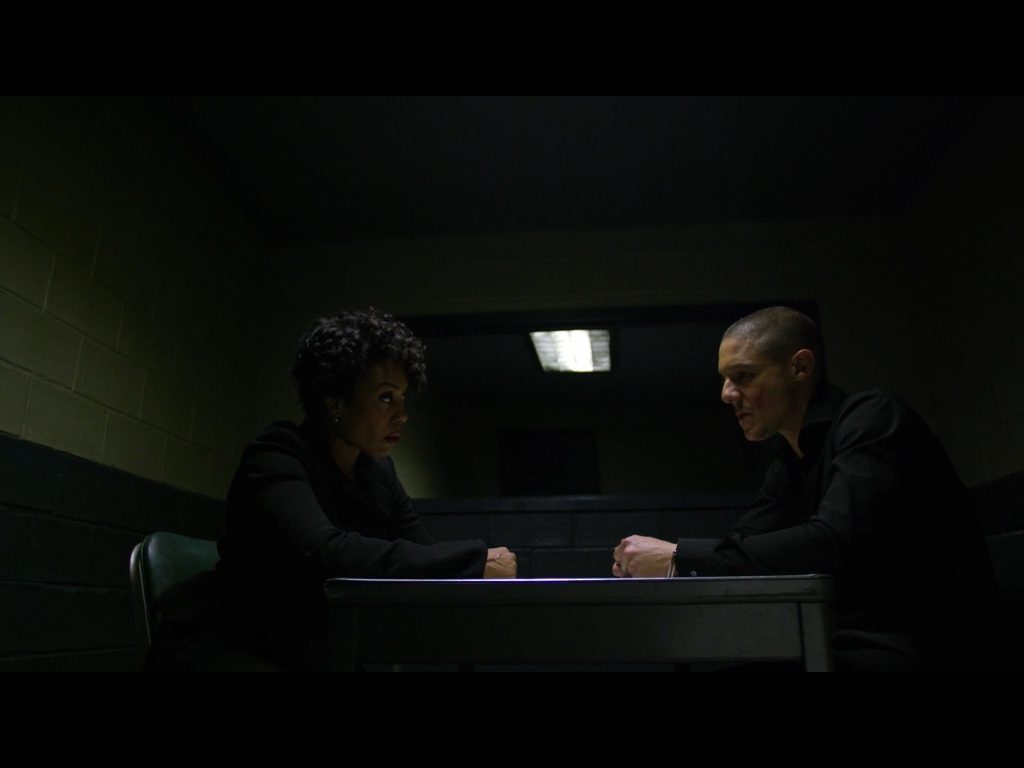 Zip and two new guys come to get Shades. They take him to an unfamiliar building and get into a freight elevator. Zip, feeling his new power from Diamondback, pulls out a something (a zip tie?) to try to strangle Shades, but he is no match for him. 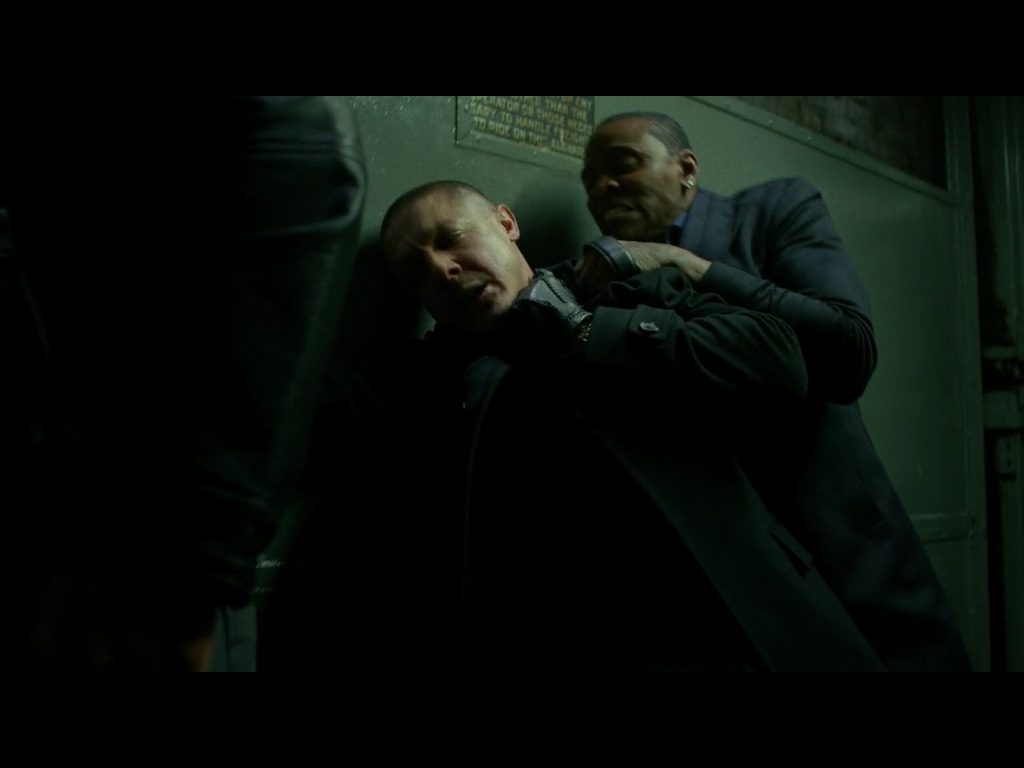 Shades kills both of the new guys with their own guns while he’s effectively holding off Zip’s strangulation attempt. Shades takes Zip to the roof and beats him until Zip gives up Diamondback as the one who ordered the hit. 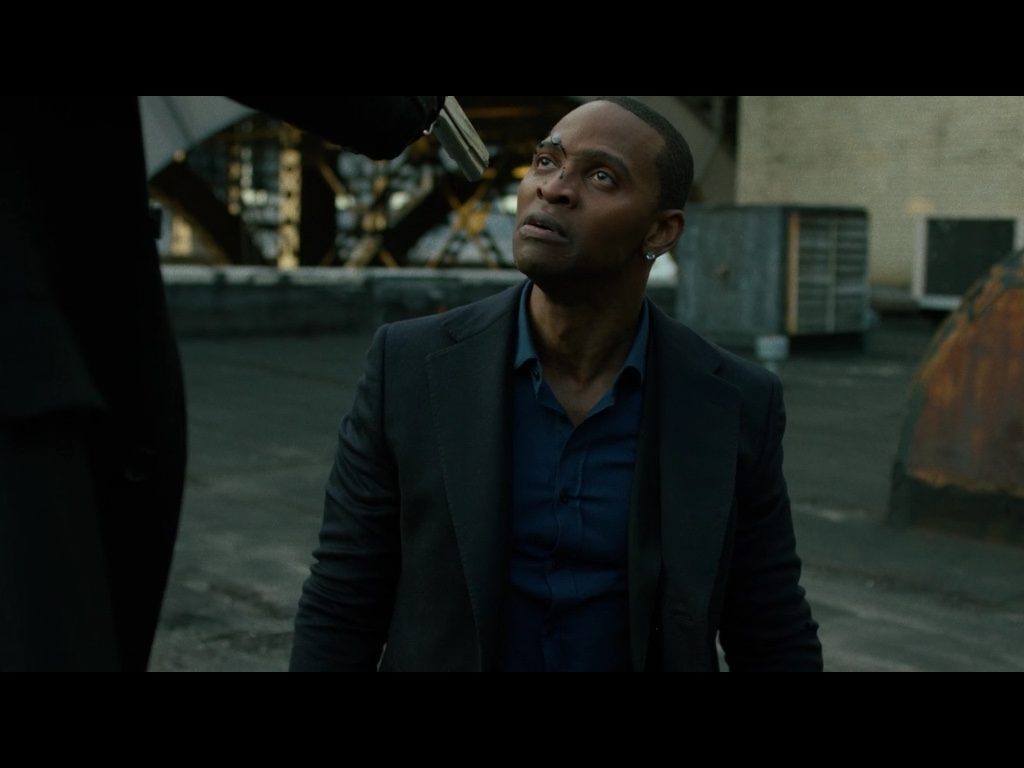 Then Shades tells Zip that Romeo would be ashamed of him before shooting him in the head. (WHO IS ROMEO??) 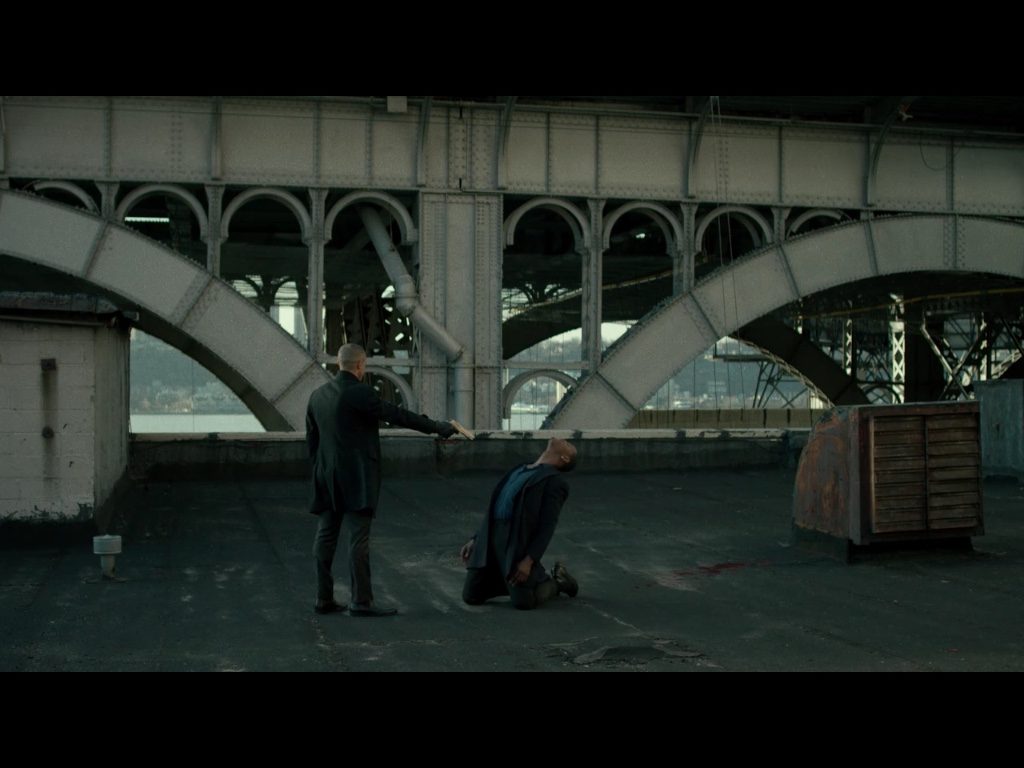 Elsewhere, Mariah’s world is shaken up. Unsettled by the destruction surrounding her in Harlem’s Paradise in the aftermath of the rally and subsequent showdown, she’s venting to her assistant, Alex (John Clarence Stewart), when he steps up to volunteer his services in helping her rebuild the club in her own image– starting with minimizing the threat posed by anyone who’s overheard her conversations there with Shades and Diamondback. 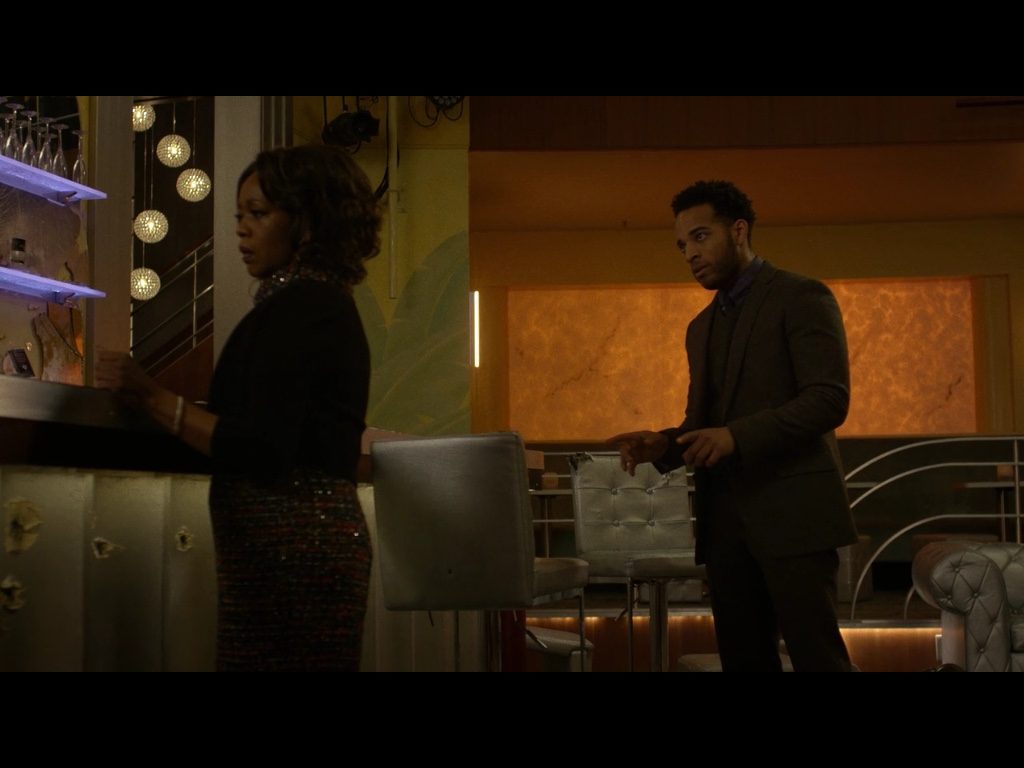 I still feel icky about jumping to Jamie/Cersei conclusions about Mariah and Cottonmouth, but dang that Alfre Woodard has such intense chemistry with all the men she plays against in this show. I have been trying to figure out if Alex is her assistant or cub all season, and this episode I finally decided it’s a professional relationship. (I think.)

In addition to Harlem’s Paradise being a mess, Candace has finally gotten up the courage to go to the cops after Luke saving her life during the previous night’s hostage situation. She meets Misty at a park and tells all, which is more than we even knew! She witnessed EVERYTHING, and she knows that Mariah did the murder and Shades coached her in the aftermath! 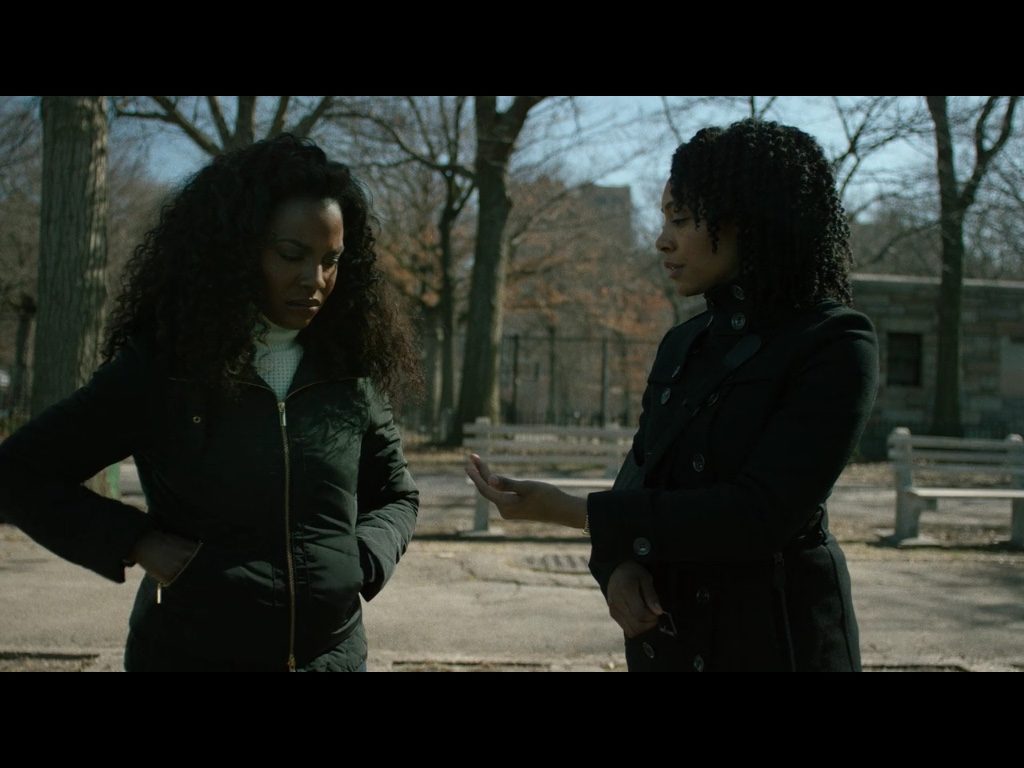 Unfortunately for poor Candace, Alex is already on the job and witnesses her conversation with Misty. 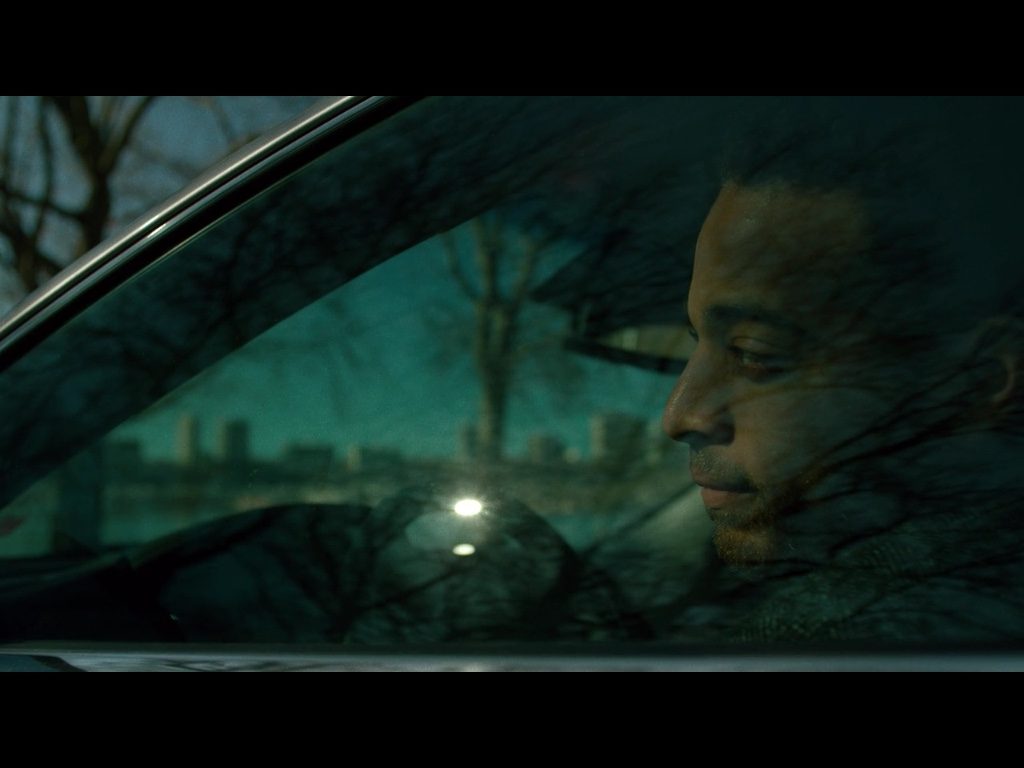 Alex rushes to give Mariah his scoop, although he doesn’t know where Misty took Candace. The minute he leaves her alone, scary Diamondback calls to test her loyalty and give her the news (as far as he knows) that Shades is dead. But you guys– the call is coming from INSIDE THE HOUSE! Diamondback walks into the room behind her with a duffel full of cash and a pretty threatening idea of what their partnership will be going forward. 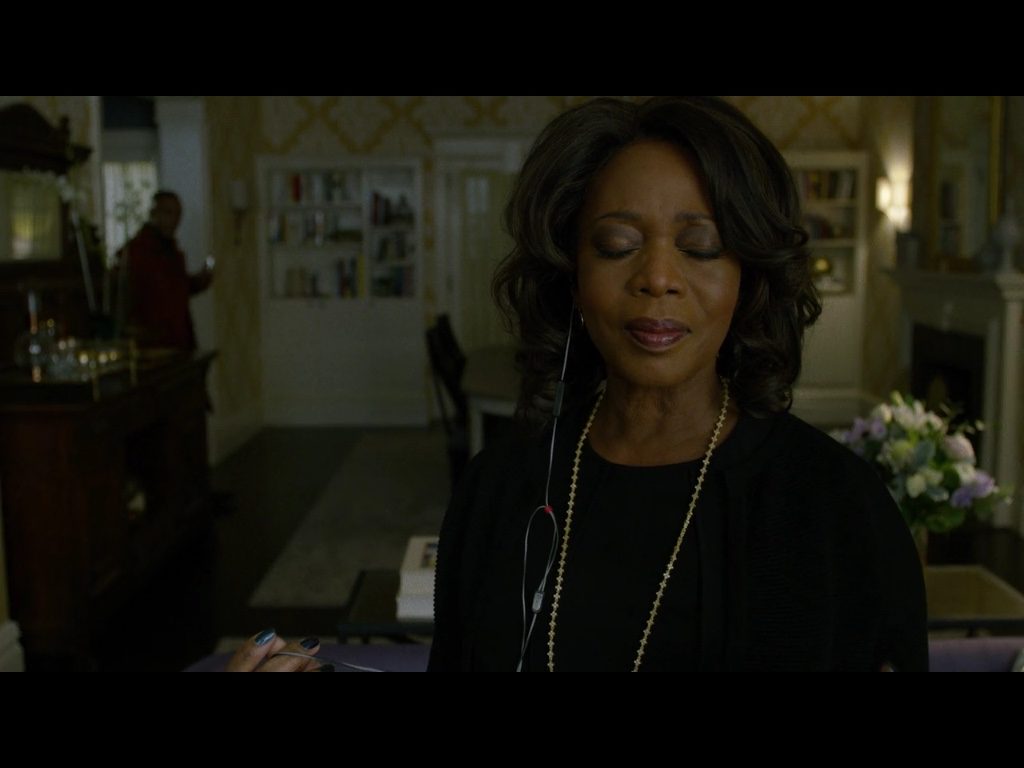 I keep forgetting to say this, but doesn’t Diamondback have a snakelike way of speaking? Does Erik LaRay Harvey wear some kind of dental prosthetic for this role, or did he just consciously want Diamondback’s speaking style to evoke Parseltongue?

Now it’s time for the threads the episode has woven to come together. With Eddie Fish’s help, Luke lures Turk to an alley to find out where Diamondback is holed up.

Unfortunately, he’s not the only one heading in that direction. Domingo and his crew beat Luke to the warehouse and get in a big, fruitless shoot-out with Diamondback. Before the bullets start flying, Domingo gives Diamondback the news that Zip and his pals were killed by Shades, who is still alive.

Some of Diamondback’s thugs emerge from the shadows, and everyone is like “bang! bang bang! bang!” Diamondback, snake that he is, slithers into another room, where he opens a box of mysterious glowing something and recites some scripture. (It’s a bomb. We all know it’s a bomb.) 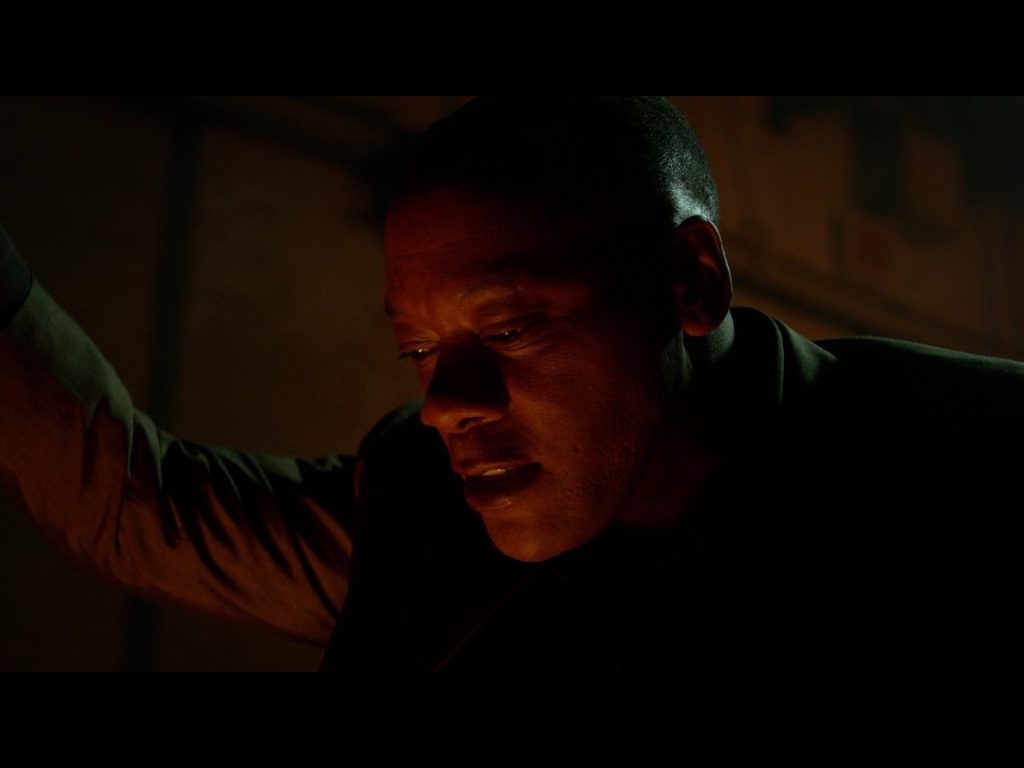 Luke gets there just in time to talk to talk to Domingo, who is groaning on the floor. 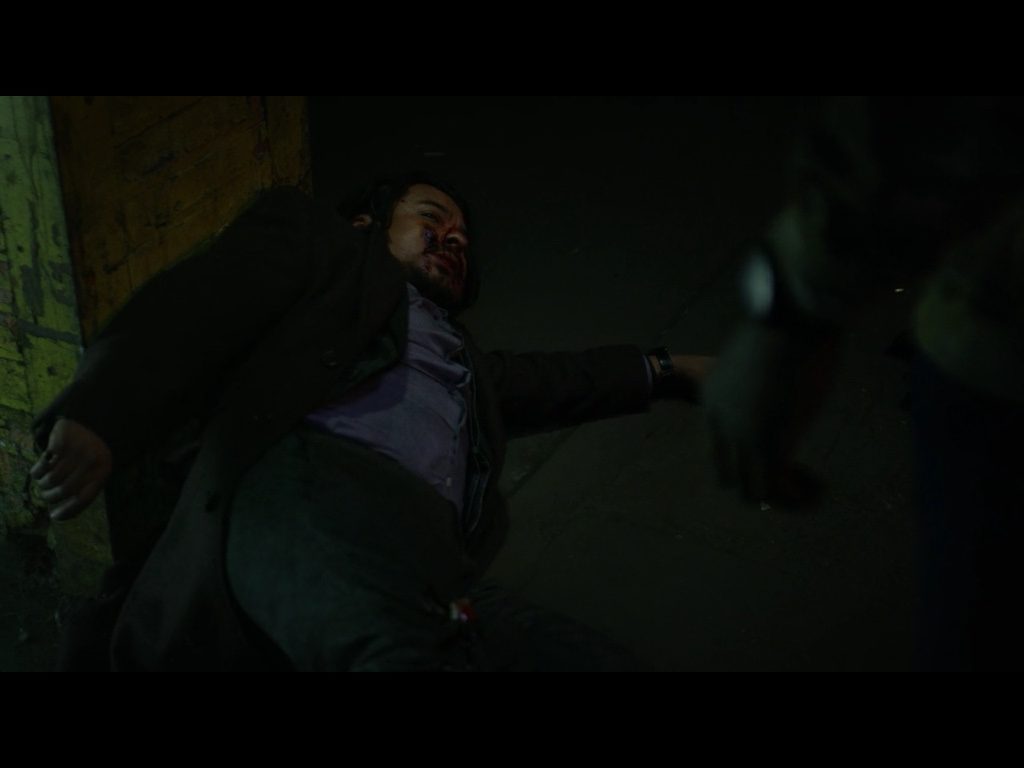 Diamondback is long gone, but Luke finds the bomb and says “Sweet Sister,” which is slightly less silly than his usual exclamation of “Sweet Christmas,” which he said to Method Man earlier. Luke picks Domingo up and gets him out of the building before it explodes, and Domingo has just enough time before he dies to tell Luke that Diamondback has SOMETHING that he’s never seen before. 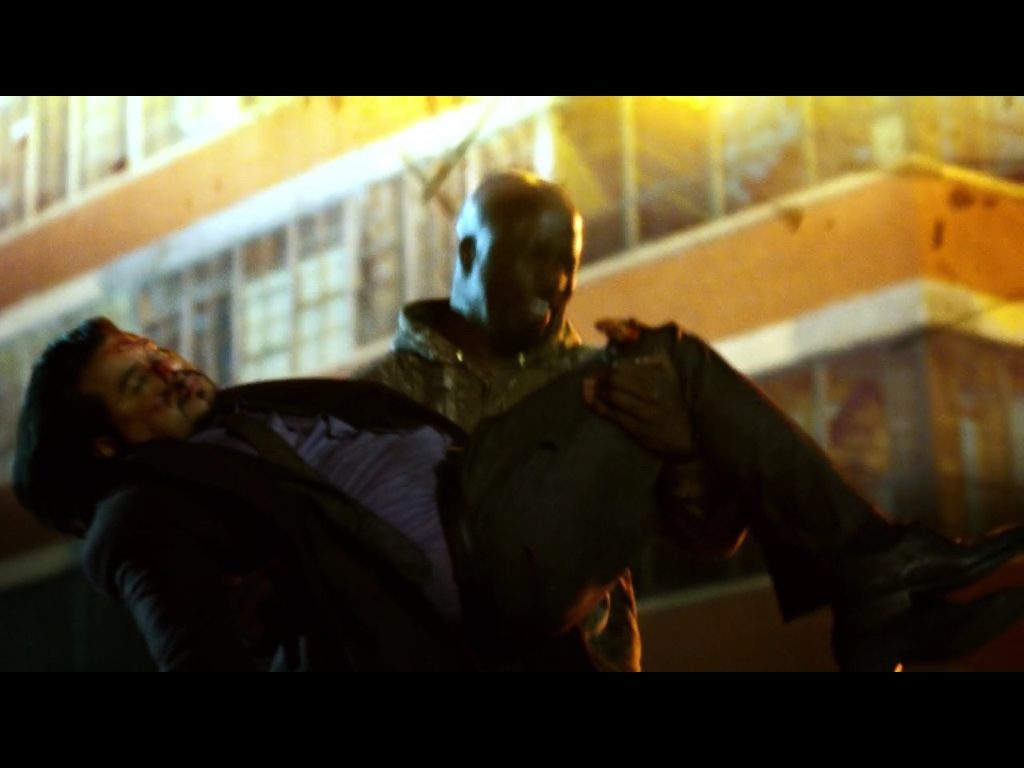 Mariah, home drinking alone, gets out the family heirloom pearl handled revolver and looks ready to head to Diamondback’s warehouse herself when Shades walks in and makes the obvious observation that she could use a security system. He then lovingly mansplains to her that the gun isn’t her style and gives her the incriminating evidence he has linking her to Cottonmouth’s murder. 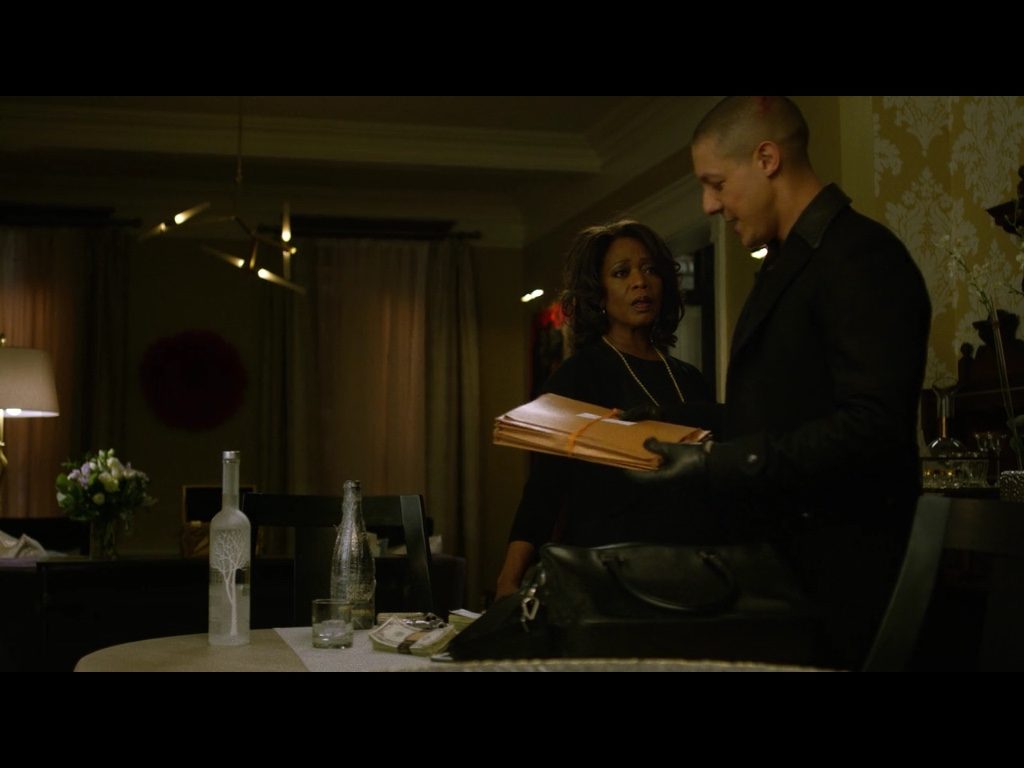 They agree that they’re going to go make up with Luke Cage and get him to kill Diamondback for them (or let them kill each other). Shades has a big file of everything that will clear Carl Lucas’s name, and he expects to trade it for Luke’s willingness to work with them.

Luke, Mariah and Shades all converge at the barber shop next, where Misty interrupts them just after they’ve started talking about working together. Initially, Luke isn’t interested in partnering with this slimy duo, but Shades was right that clearing Carl’s name might sway him, and Mariah says she’ll clear Luke’s name, too. When Misty crashes the party, though, she winds up in a Mexican standoff with Shades that distracts everyone long enough for Diamondback to literally crash the party– with a grenade. 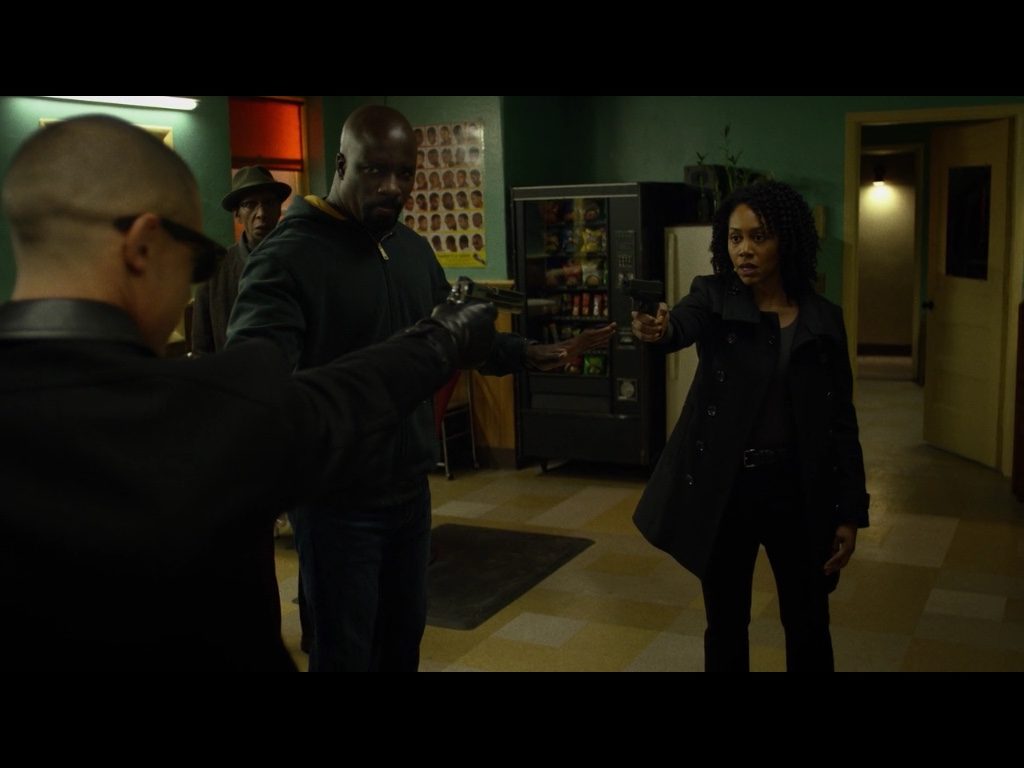 Diamondback walks in through the cloud of dust and smoke left behind by the grenade, and Eddie Fish deliver’s the episode’s best line, evaluating the jumpsuit and helmet Diamondback is wearing and saying: “What the hell? What kind of Jean-Paul Gaultier shit is this? What are you, some kind of pimp storm trooper?” 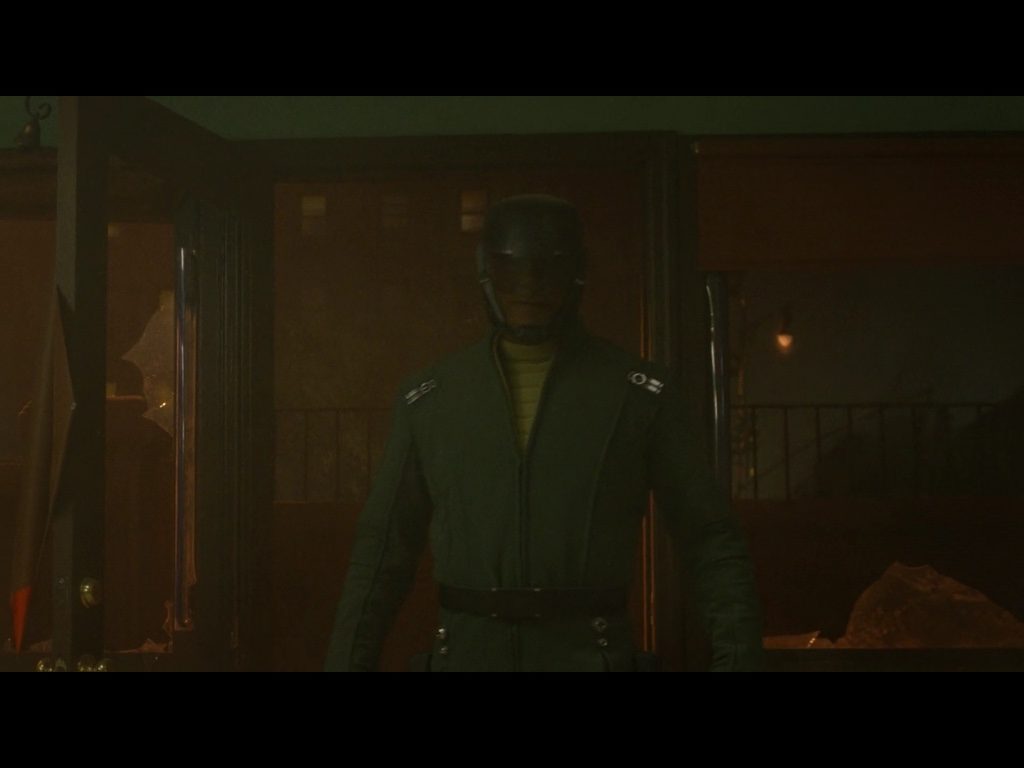 The pimp storm trooper getup is bulletproof, and after Shades finds that out by futilely shooting Diamondback, Shades and Mariah skedaddle out the back of the shop and Misty gives chase. That leaves Luke to deal with Diamondback, and as the two begin their throw-down, the episode ends.

Read the rest of my Luke Cage Season One recaps HERE.