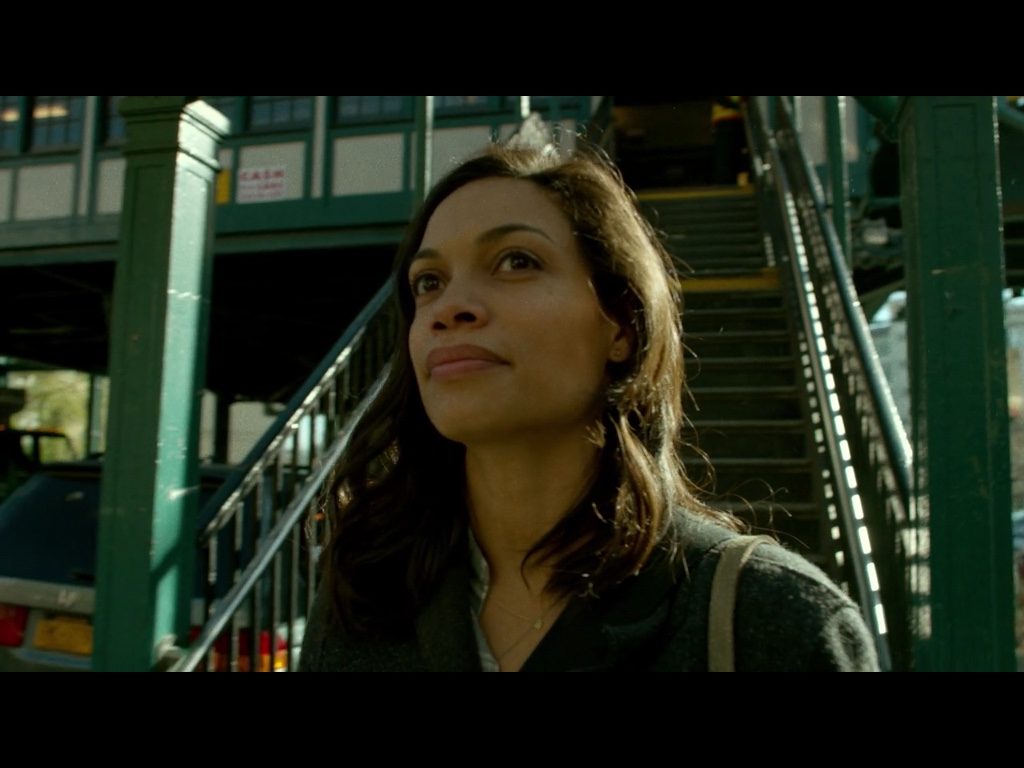 Should I be surprised that Luke Cage’s first conditional pass on the Bechdel Test is the episode in which Rosario Dawson‘s nurse Claire Temple shows up? I’m not. In addition to seeing Claire and her mother, Soledad (the amazing Sonia Braga) have a conversation, we also meet Detective Misty’s captain, Betty Audrey (Sonja Sohn), when she and another colleague come to tell Misty that her lame partner is under investigation. (I’m calling the pass conditional because although they aren’t talking about boys they have crushes on, the conversations are all essentially about the actions of men.) And on top of the conversations between women, Claire chases down and beats up a purse-grabber as soon as she appears. What a way to make an entrance!

The Bechdel Test is important to me, because I want to see myself represented in the Marvel universe and in geek culture. Especially when I’m watching a show that does as good a job at representation as Luke Cage– featuring a largely black cast with significant roles for Latinos, characters of a variety of ages and income levels, etc.– I hate to see an easy beat missed. I give the show big credit for the fact that most of the female characters so far have been women who have some power– Mariah the councilwoman/crime boss, Misty the Detective, Betty the Captain, Reva the psychologist, Aisha (Ninja N. Devoe) the business owner and the unseen presence of “Mama Mabel.” However, it’d be nice to see more women sprinkled throughout. 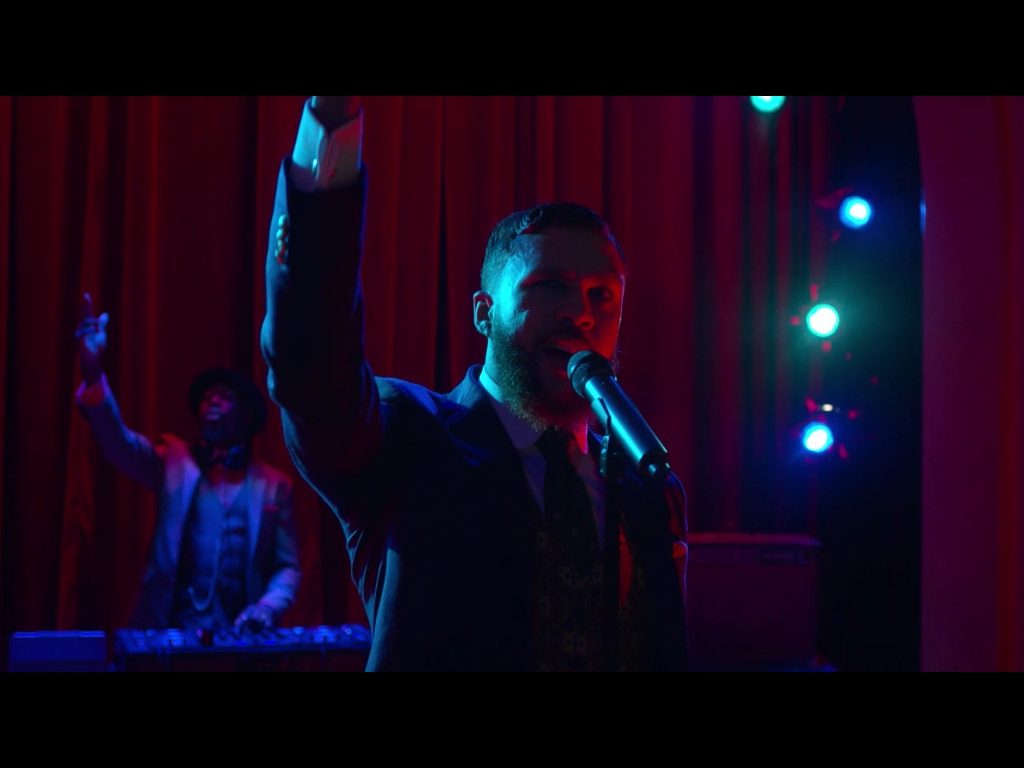 OK: I’ll get off my soapbox and into the episode, which begins with the latest in a series of attention-stealing artists performing at Harlem’s Paradise, Cottonmouth’s club: Jidenna. IMDB lists Ali Shaheed Muhammad and Adrian Younge as “series music,” and if these are the folks behind booking the club’s acts, they are KILLING IT. The episode opens with Cottonmouth standing in his VIP balcony watching Jidenna performing “Long Live the Chief.” The full track plays over visuals alternating between Cottonmouth, Luke digging in the rubble of his former home for Pop’s swear jar and Claire’s high-energy arrival.

When the song ends, we join Cottonmouth in his office as he lays down the new world order for his troops. He’s lost millions in Luke’s assault on his fortress, and he’s ready to bleed Harlem for every cent its residents have, instructing his flunkies to tell the folks they rob that they’re paying a “stupidity tax” for Luke Cage’s actions. Shades is present and challenges the idea that this crime spree can put a dent in recovering the lost funds, but Cottonmouth is determined, even shooting one dissenting flunky in the head to make it clear that he means business. 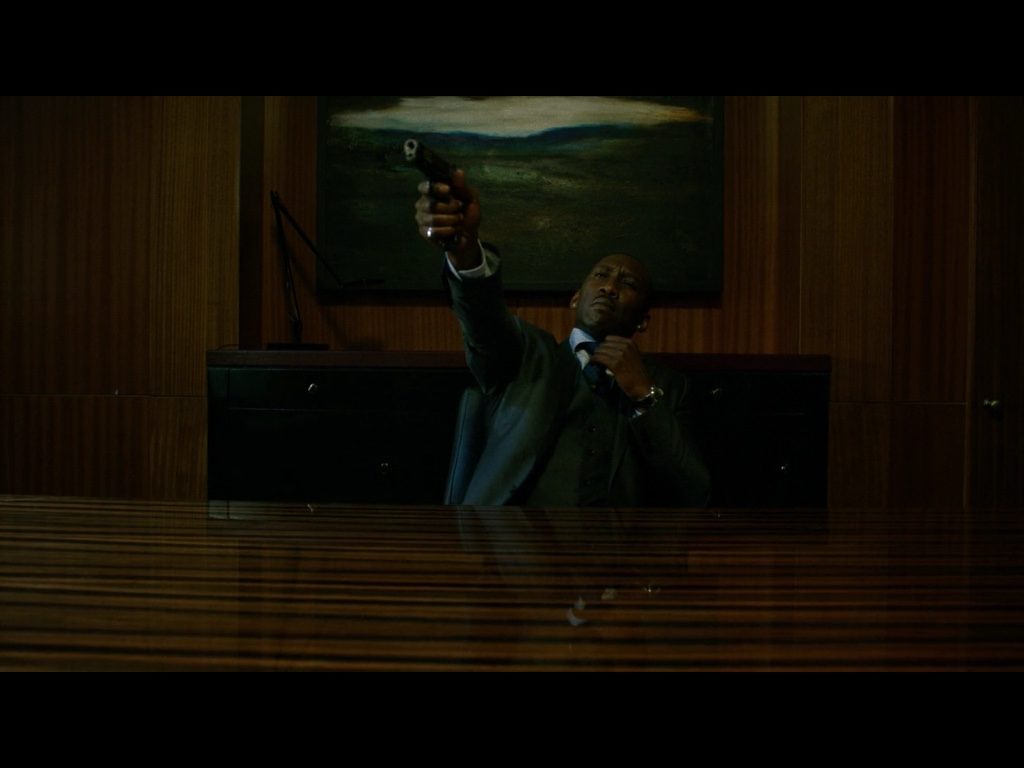 The troop of flunkies beats cash, jewelry and more out of their victims, including taking a baseball championship ring from Aisha’s sports memorabilia shop– her father’s ring. Before Luke can get out the door of the barbershop in his fancy new suit to attend Pop’s memorial service, Aisha shows up and demands that he take action against the hoods, telling him not to be a punk. Luke accepts her challenge and emerges into a crowd of other wronged souls who also want him to recover their belongings. He says, “I’m on it.” He is.

Luke is successful at retrieving a number of stolen goods before being stopped by Misty and her lame partner. Misty tells him to just leave town, but he ignores her and goes to Harlem’s Paradise, where Shades is counseling Cottonmouth to sell Harlem’s Paradise for the money. Cottonmouth says that he can’t because no black people have ever done anything like his club in Harlem before, and he won’t give it up. (That Mahershala Ali does a pretty masterful job of making he love/hate Cottonmouth every episode.) 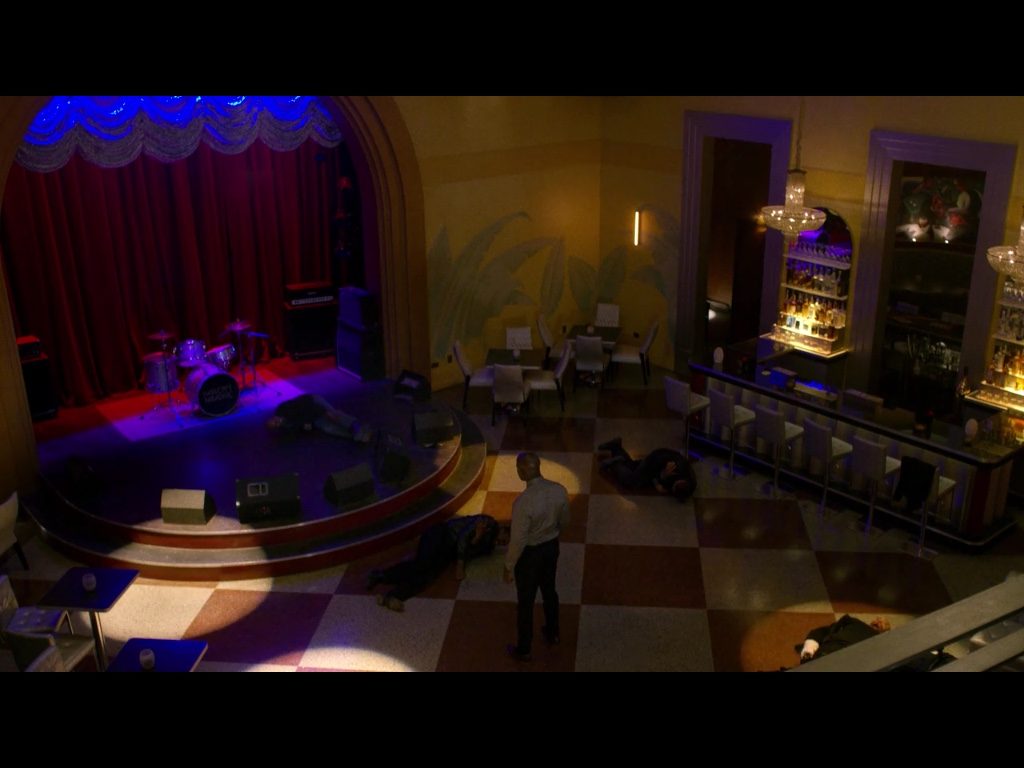 Enter Luke, who puts the beat down on Cottonmouth’s thugs downstairs while Shades and Cottonmouth razz him from the balcony– until they see that Luke has superpowers and can deflect bullets. Cottonmouth heads downstairs on the double, while something about the fight triggers Shades’s memory, and he knows he’s seeing Carl Lucas in action. 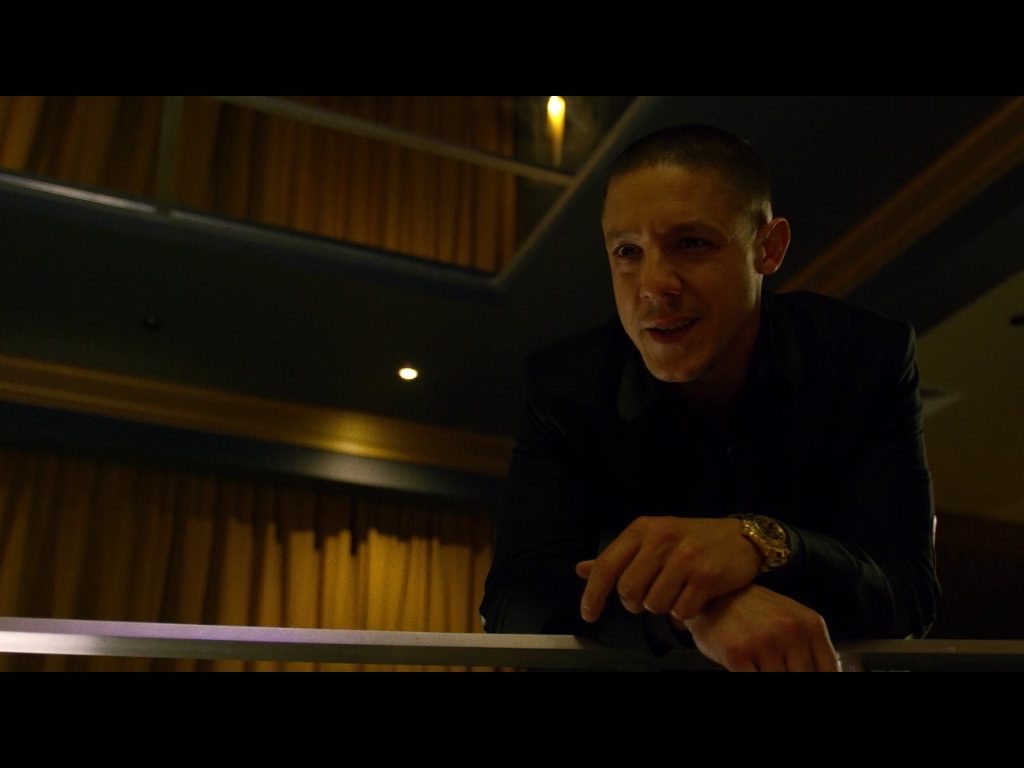 While all this is going on, Claire has been settling in at her mama’s restaurant and explaining that she’s come home to where “things make sense.” Her mother wants to know more, and Claire alludes to the things she’s seen and done in Daredevil and Jessica Jones, and explains that she’s been asked to leave her nursing job in the wake of events from Daredevil. Claire wants to help people who have “abilities,” and her mom believes that might be her fate. 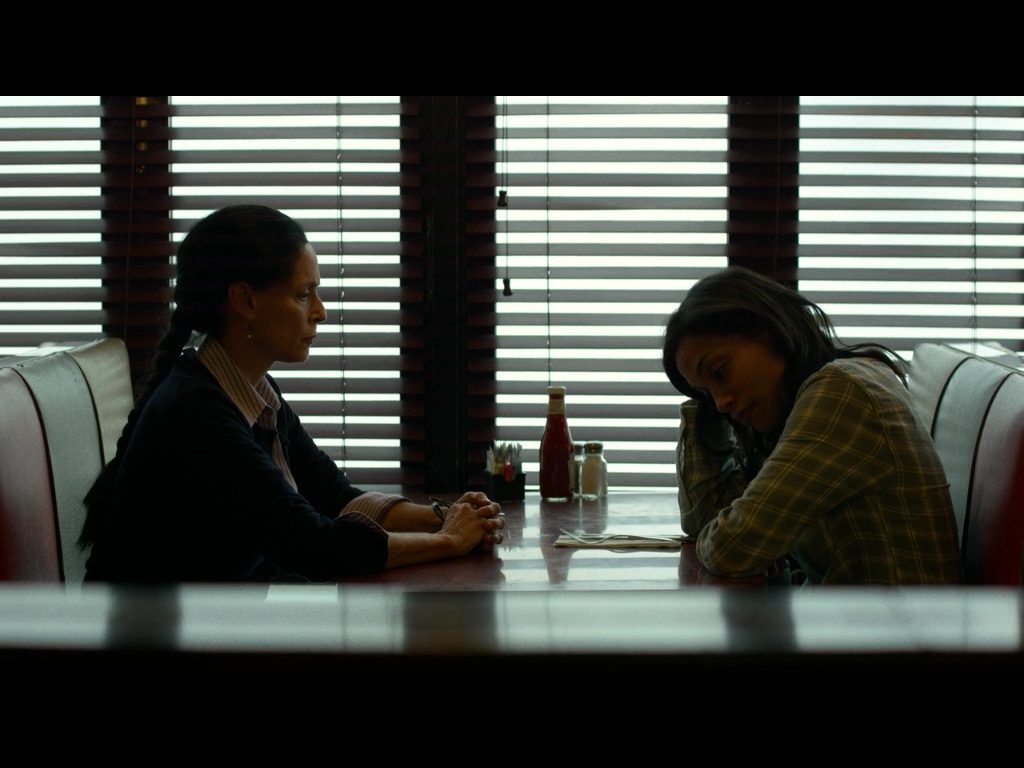 Back at the club, Shades introduces Cottonmouth to a SCARY bullet made of alien metal. The bullet explodes its target so effectively that there’s no evidence left behind. The enthusiastic bad guys believe this alien bullet could kill Luke Cage, but it is very expensive. Cottonmouth can either raise money to buy one himself or call in a favor from Diamondback, and if he chooses the latter, Shades warns that Diamondback will take Harlem. Cottonmouth opts to try to avoid that and begins making phone calls. 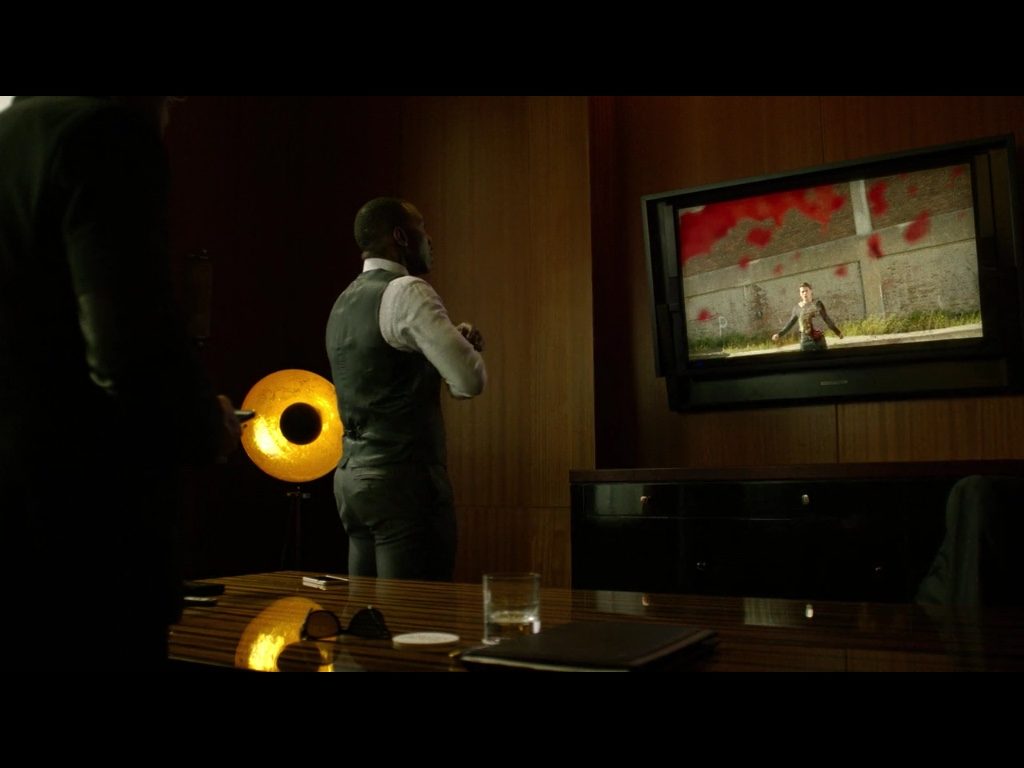 Luke’s last target in his property reclamation project is getting Aisha’s ring from robbing thug Zip (Jaiden Kaine). He does so by deflecting some bullets, lifting Zip by the neck and speechifying about black cultural figures. 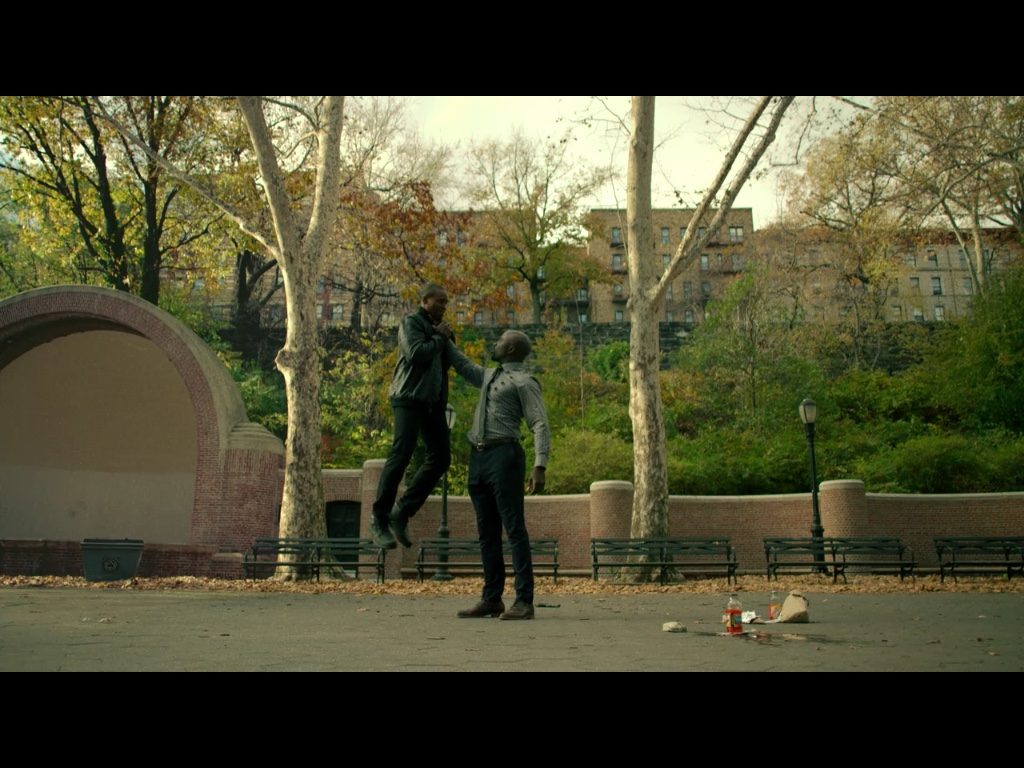 Next we see dirty Detective Scarfe chilling with a fellow dirty officer on a bench, where they discuss retrieving Cottonmouth’s guns from the evidence locker with the help of another dirty officer. One might ask why they don’t also retrieve Cottonmouth’s money if this sort of thing is so easy, but I suppose one must suspend one’s belief with more than just the super powers in a program like this.

When Luke goes looking for Aisha, instead he finds her drunk father and he gives him a hard time about being a disappointing father figure, then heads to Pop’s memorial where he stops Aisha from becoming a vigilante by quietly crushing the gun in her purse. He and Cottonmouth take turns at the podium with their speechifying veiled messages to the packed house, definitely giving the feeling of being contestants at a high school debate contest. Luke wins, if we’re judging by applause. 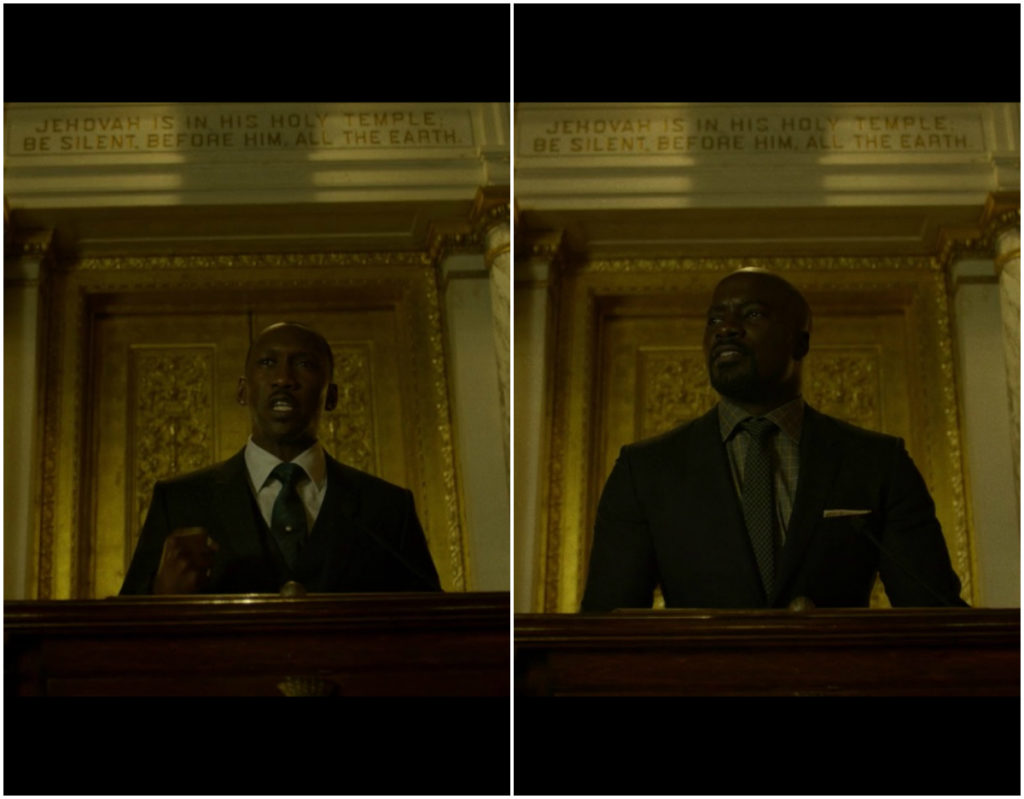 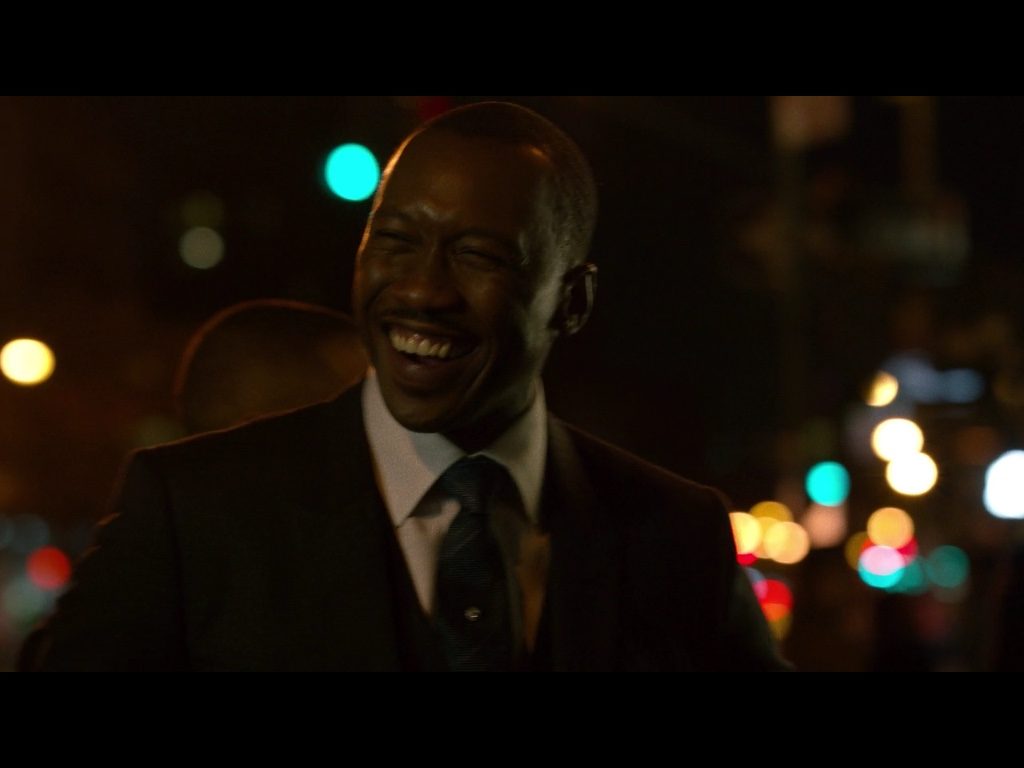 Then Detective Misty tells Luke again that he should leave town because he is inciting a war and although he is bulletproof, Harlem isn’t. He basically tells her things between them are over because she keeps telling him to leave town, which I hope leaves the door pen for a Rosario Dawson romance instead. 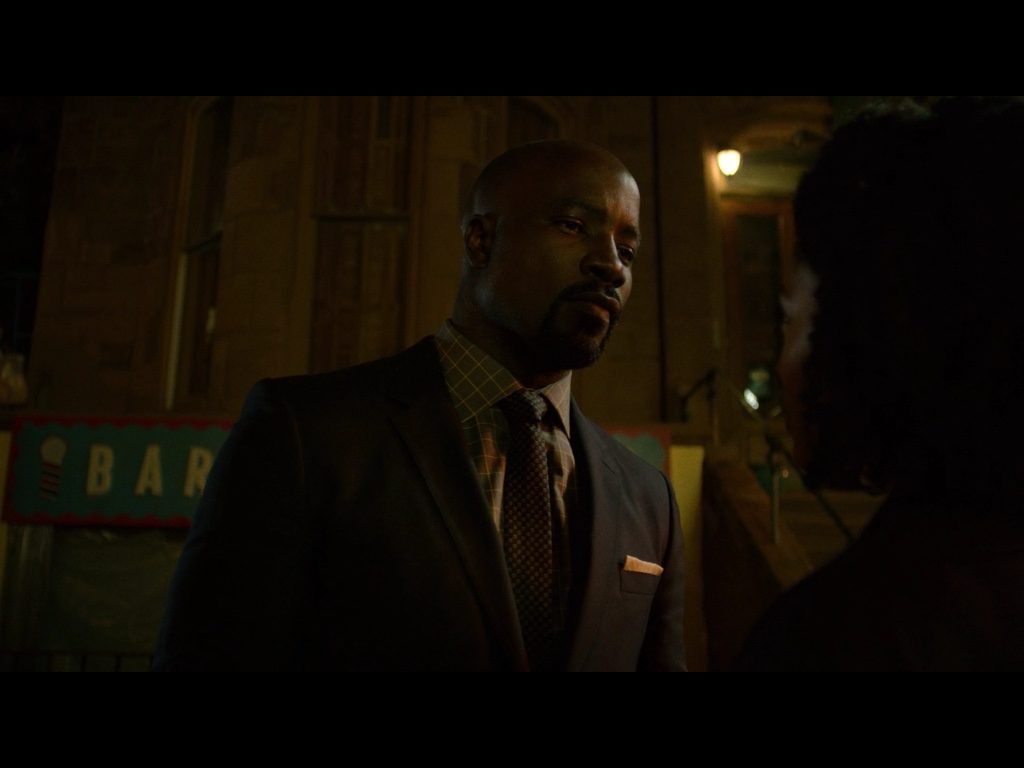 Also in this episode: Dirty Detective Scarfe fails to deliver the guns to Cottonmouth, and we don’t know what he’s doing with them yet; and Claire sees Luke on TV while in her mom’s restaurant and is told by conveniently present Turk the chess-player that Luke is at the barbershop.

All-in-all, this episode’s best moments were Claire kicking the purse-grabber’s butt and Jidenna’s song. Beyond that: LOTS of talk.

Read the rest of my Luke Cage Season One recaps HERE.