Lucifer’s season three premiere, “They’re Back, Aren’t They?” opens on an empty desert road. An armored car speeds down the street. Inside, the driver looks around panicked. Suddenly, he comes to a jarring stop. A shirtless Lucifer (Tom Ellis) stands in the middle of the road, his wings extended fully. As Lucifer tries to get into the car, he gives a pained grunt. He quickly remembers… wings… they’re back. Lucifer folds his wings back into his body. He needs two things… to get back to LA, and to get some aloe vera.

It turns out, the driver isn’t a real armored car driver. In fact, he’s a jewelry thief we’ve seen before. However, Lucifer plays the situation with his usual flair. As the police pull up, Lucifer steps out of the car, clad in the driver’s overalls. When the officers ask where the driver is, we see him. He stumbles through the desert clad in nothing but his underwear… 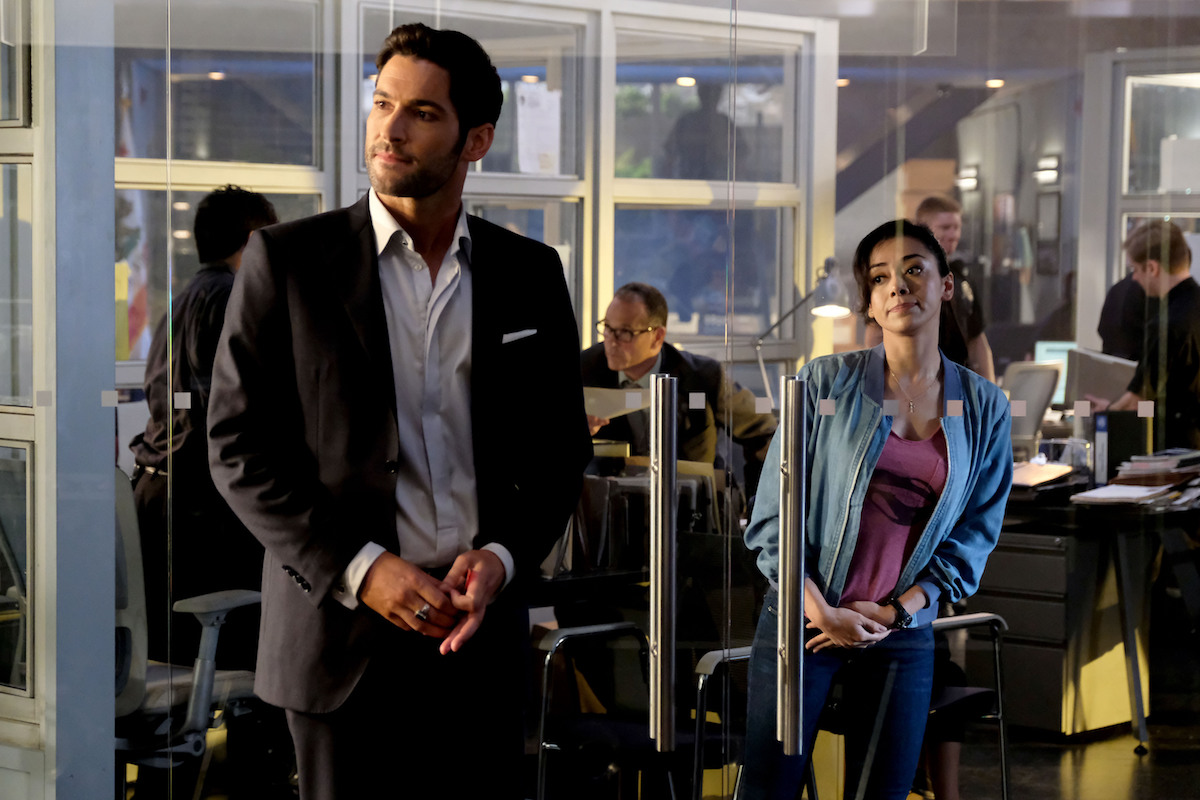 Later, Lucifer returns to the police station. It seems everything has proceeded normally despite his absence. While he feels he must have been gone forever, Chloe (Lauren German) corrects him. He only disappeared two days ago. Desperate to prove his point, he takes her to the scene of the crime. He is certain he was kidnapped, and his father is most certainly behind it. However, they get more than they bargained for as Chloe shifts her glance… there’s an arm poking out from the sand. Lucifer’s right… this is a crime scene.

In fact, the arm belongs to a man called Steve Banales. As the police move into the crime scene, they discover the man is the CEO of a local hotel. How is Banales’ murder related to Lucifer’s kidnapping?

As they work, Ella chatters excitedly about Lieutenant Pierce (Tom Welling). The new Lieutenant is a “serious rock star” and is brand new to the precinct. 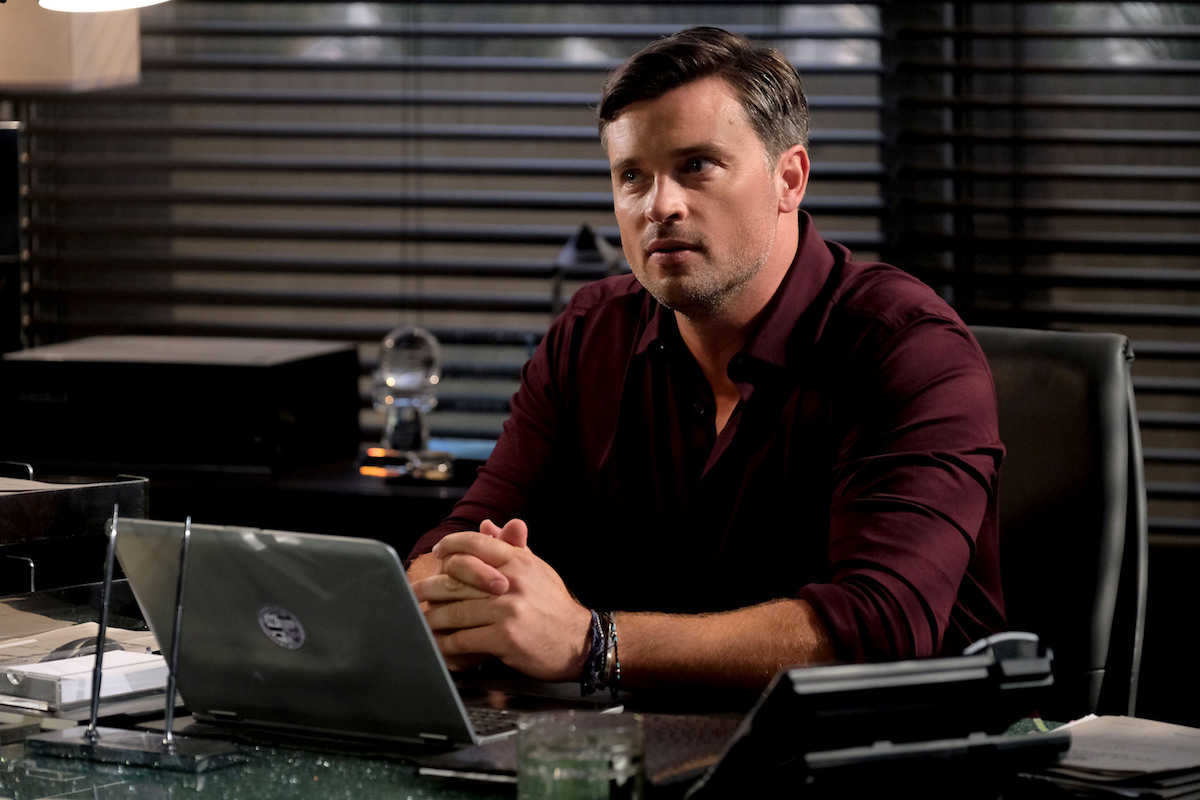 Back at the station, the new Lieutenant walks down down the stairs. As Pierce makes his way through the characters, it seems he’s quite… abrupt. He’s not going to be an easy one to get along with. However, before they can discuss the new addition, Amenadiel (D.B. Woodside) arrives. He and Lucifer move off.

Amenadiel wants information about Mom (Tricia Helfer). Lucifer looks at him, “Didn’t you get my text?” Amenadiel produces his phone, “You mean the string of non-sensical emojis?” He holds up the screen to show an emoji text… Fire+Sword+Donut+Spaceman+Alarm Clock+Lady+Flashlight+Thumbs Up. Lucifer responds quickly, “I ignited the flaming sword, used it to cut a whole in space and time, Mum’s light flooded through it, then it closed up behind her. All good!”.  Ella (Aimee Garcia) interrupts the conversation. It seems she found fingerprints on a keychain at the crime scene. They have a suspect! She shifts her glance to Amenadiel. It seems she never met Lucifer’s angelic brother. However, she’s seen him doing his “brooding thing” and gives him a big hug. 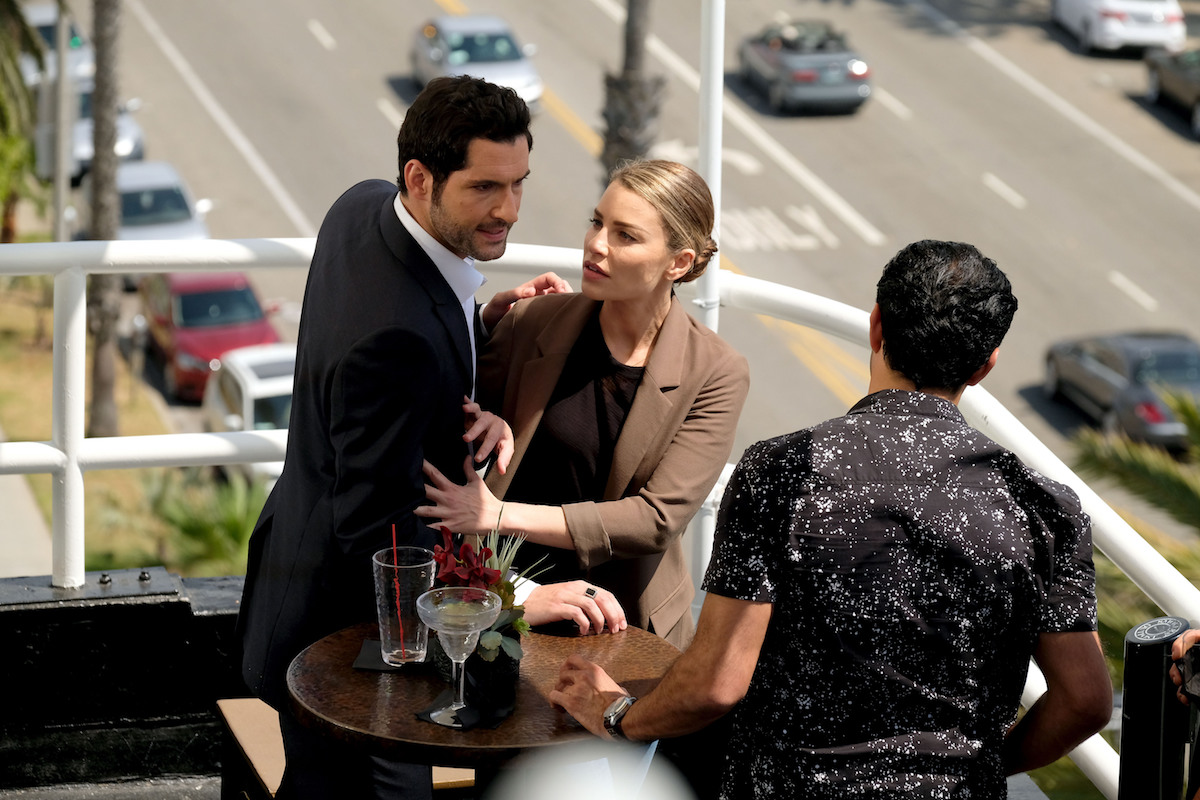 Later, Chloe and Lucifer leave to talk to their suspect, Josh Hamid (Pej Vahdat). As they start to question him, Hamid takes off running. They manage to catch him when he can’t get through a gate. Hamid turns around, laughing. Could he not know Steve is dead? However, before Decker can find out, a frustrated Lucifer throws him over the rail.

However, Hamid seems entirely alive and only mildly shaken as he arrives at the station for further questioning. He admits pulling a fake kidnapping on his friend Steve. It seems he meant the move as retaliation for a tiger Steve put in his backyard.

Meanwhile, Amenadiel arrives at the penthouse to visit Lucifer. He mentions a text Lucifer sent him about a “magical remedy” he found. However, the remedy is a sexy masseuse…. named Remedy. She instructs Amenadiel to remove his clothes and get under a towel. However, Amenadiel needs a bigger towel. As he goes to find one, he finds something even stranger in Lucifer’s bedroom. His brother’s severed, bloody wings lay discarded on the floor.

With team Lucifer all feeling a bit rattled, Pierce sends them out to investigate. Dan (Kevin Alejandro) is going to get kidnapped. Espinoza (or “Espironza”, as he calls him) is the expendable one, after all.

While Dan waits on a street corner for his impending kidnapping, something goes wrong. At the same time, a van pulls up and grabs Lucifer from where he stands. “Careful! I bruise like a peach!”. Chloe drops her head in her hands as she reads the “Target Acquired” text message. They got the wrong guy…

Back at the station, the team struggles to find Lucifer. However, it seems he doesn’t need saving. He’s quickly able to make a move on his kidnappers and proceeds to question them… with his usual flair.

It seems Lucifer and the rest of the team find themselves on two separate investigative paths. While the team manages to locate the murder van at the crime scene, Lucifer breaks into an office. Sam (Michael Gladis), the rattled manager of the extreme kidnapping company gives away the whole story. However, the explanation is delivered quickly. They’re building up to something much bigger. Sam looks at Lucifer,  “Is your dad the Sinnerman?”. Lucifer looks around. This name is unfamiliar to him. It seems the Sinnerman a big crime boss who paid to have Lucifer kidnapped. However, you can’t find him. He finds you. Furthermore, Lucifer’s wings somehow grew back. What is going on, here?! 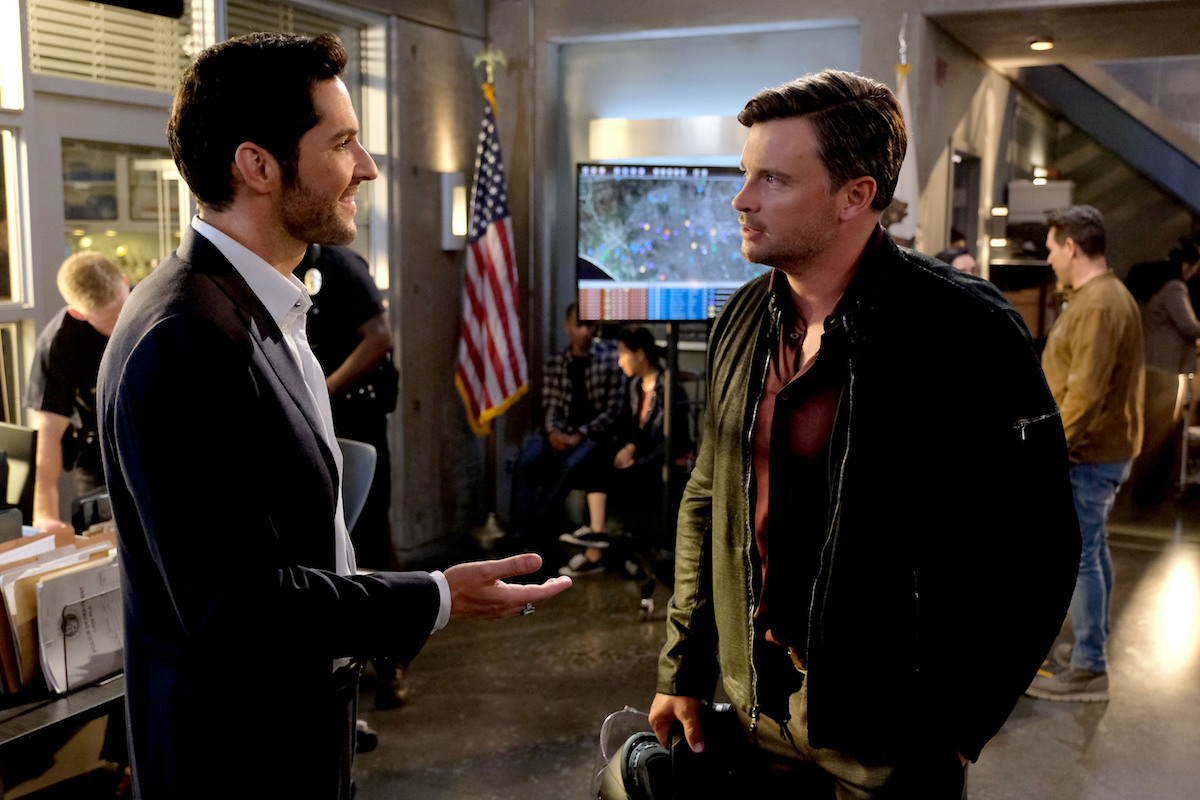 Later, Pierce comes to find Decker at the station. It turns out, Sam somehow made bail. Decker looks up at him, “How is that possible?”. His response is a small shrug, “You can’t win them all”.

Meanwhile, Amenadiel and Lucifer come face to face in the penthouse. As they talk about the Sinnerman, the scene flashes to another crime scene. Sam lies dead… impaled on some metal piping. Ouch. The team will be facing another formidable big bad this season. Stay turned.

Lucifer airs Monday nights on Fox. Meanwhile, for those who need to catch up, previous episodes of the show stream on Hulu.