LUCIFER opens in Charlotte’s (Tricia Helfer) penthouse. While Chet’s crispy body still lays on her floor, Charlotte reclines in a chair, stapling her stab wound shut. Unable to move the heavy corpse by herself, she picks up a nearby phone, “I need a favor”.

Meanwhile, Lucifer (Tom Ellis) and Amenadiel (D.B. Woodside) are still staring in disbelief at the key to the flaming sword. Amenadiel grins from ear to ear, finally feeling the validation he’s long craved. He’s the favorite son. However, Lucifer doesn’t see it that way. This must be their father manipulating them again…

Later, Dr. Martin (Rachael Harris) walks into her office, coffee in hand. She starts as she notices Charlotte in the corner. “God!”. Charlotte winces, “Goddess, but whatever”. It seems, she needs Dr. Martin to patch her up. Furthermore, this isn’t something that she can go to a medical doctor about. It’s not a human problem. As Doctor Martin takes a look at the wound, a blast of etherial light nearly takes her head off.

Meanwhile, Lucifer is trapped in his own thoughts as he talks with Chloe (Lauren German) on their way into their next crime scene. “You have experience with emotionally fragile men…”. Chloe smirks, “You’re self-aware today”. They stop as they come across a body. It seems the poor victim was not only burned, but also had his entire body shaved…

Wrapping up the action at the crime scene, Lucifer visits Dr. Martin. However, he finds Charlotte stretched out on the sofa. She brims with excitement as she learns the missing piece of the flaming sword has finally been found. However, there’s a problem. It seems the body dumped in the warehouse is Chet from the last episode. While Charlotte claims “a pro” cleaned up the mess, Lucifer is in a panic. The detective is “annoyingly good”, and will crack the case. 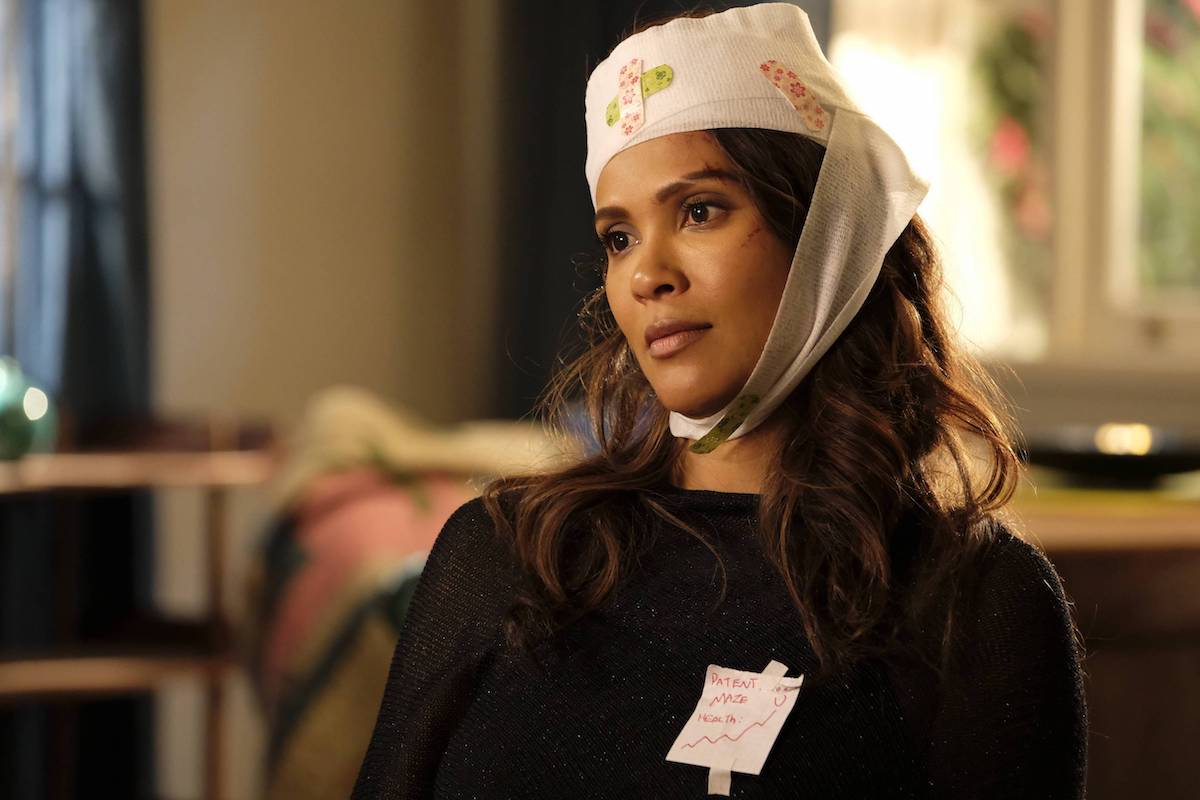 Later, Lucifer enters Chloe’s apartment to find Maze (Lesley-Ann Brandt), but stumbles onto the demon and Trixie (Scarlett Estevez) in the midst of playing doctor. Maze sits on the couch, bandaged heavily. She looks up, “Don’t fight it. The kid’s fierce”. While Trixie works over him, Lucifer winces as he tries to make peace with Maze. He needs the best bounty hunter he knows to find his seemingly missing brother. He looks to Trixie as she hands Maze a lollipop, “I love a good lolli”. Trixie looks him over, “Wusses don’t get any”.

Meanwhile, Amenadiel sits in a dark room. He talks, seemingly to himself, about the powerful feelings racing through his system. However, a man suddenly appears next to him, “How was your pork chop?”. The lights around them rise. Amenadiel is crashing Dan’s (Kevin Alejandro) improv group. However, as the team dives into another scenario, it turns out Amenadiel is in kind of a dark personal place for the comedy group. 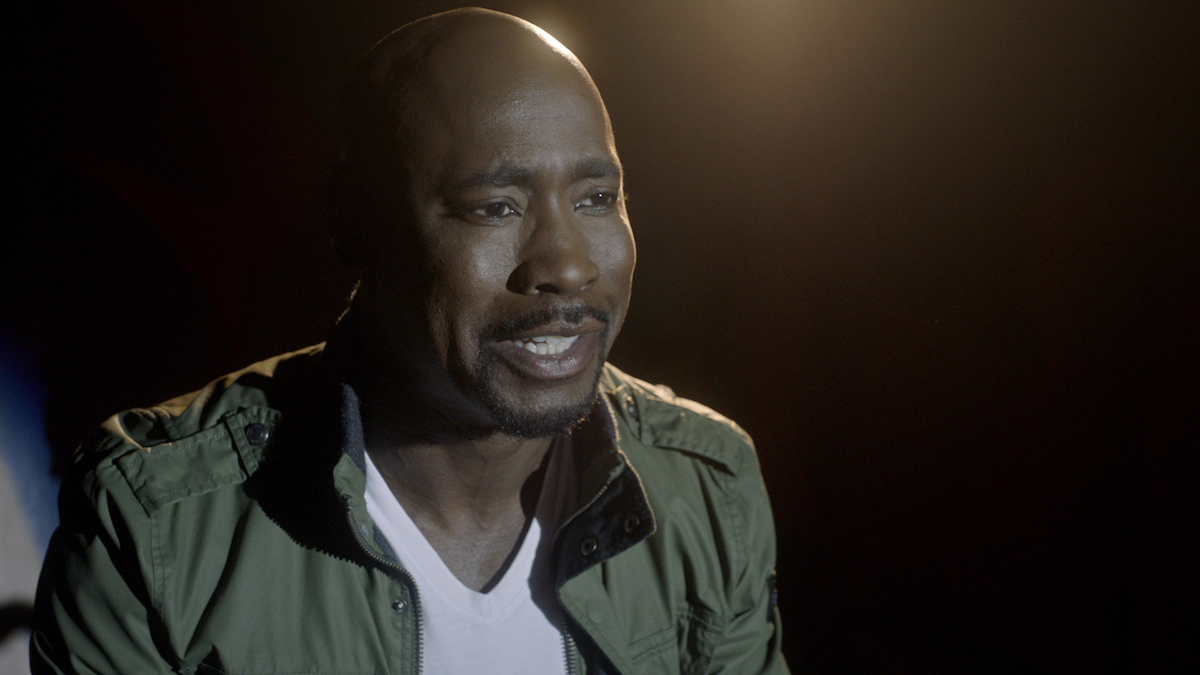 At the same time, Maze is a heck of a bounty hunter, and easily finds Amenadiel as he leaves the improv theater. He admits to not being ready to bring Lucifer the pieces of the flaming sword. After all, his father entrusted him with it. However, Maze “doesn’t get paid by the hour” and tases him. He crumbles to the ground, unconscious.

Later, the brothers are reunited in the penthouse. However, they are on drastically different paths. Lucifer finally admits the truth of his motives to his brother, but Amenadiel won’t follow him. His reinvigorated loyalty to their father prevents him from setting his mother loose on dear old dad.

While Chloe is hard at work investigating the appearance of another body, Lucifer’s focus is purely on his dysfunctional family. As such, when Chloe calls asking for his help, he can’t be of assistance. There’s a moment of tension as Charlotte reveals she too knows Lucifer’s plan. Dr. Martin told her. In a frightening showing of strength, she launches her sons across the room and storms out.

Later, the brothers push themselves to their feet as a cell phone rings. It turns out, it is Charlotte. She stands with Chloe and Dan at the Santa Monica Pier. It seems the police figured out she was the “bad guy”. While she talks with her Lucifer, it’s clear Charlotte has a plan. Is Chloe in danger?

Meanwhile, Maze arrives to see Dr. Martin, but first finds a bloody doorknob. Charlotte has already been there. Maze breaks open the door and finds Dr. Martin laying in a bloody heap on the ground. She is still alive, but in bad shape. Luckily, Amenadiel arrives just in time…

Back at the pier, Chloe questions Charlotte as Lucifer arrives. There’s a stand-off as the real killer emerges. It seems Chet’s brother (Marcus Coloma) staged the second murder in an attempt to frame Charlotte. He fires, but suddenly time seems to stop. Lucifer grabs Charlotte’s hand and they leap to safety. However, he lights the flaming sword and turns on his mother. “This has to stop!”.

Emotion builds in Lucifer’s eyes as he faces off against his mother. This is his home. He’s not leaving. He swings the flaming sword, opening a black void next to them. It seems the flaming sword can cut through anything, even the world itself. The two tearfully embrace. Lucifer watches as Charlotte is slowly engulfed in etherial light and projects herself into the black void. It seems she’s going to start her own world. As the light goes out, Charlotte’s body drops into the sand.

Across town, it seems the time stoppage is due to Amenadiel. His angel powers are back. He watches with a smile as Linda is loaded into an ambulance.

Later, Lucifer sits at Linda’s bedside. Thankfully, the good doctor is alive and on the mend. She talks with Lucifer, and assures him that she walked into the “world’s most dysfunctional family” with her eyes wide open. Lucifer takes this to heart. He leaves the hospital and phones Chloe. There’s no going back. He’s ready to tell her everything. However, there’s a thud and Lucifer collapses.

Lucifer wakes up in the middle of the desert. His body his burned. His lips are chapped. He slowly pushes himself to his feet, and as the camera pulls back, Lucifer has his wings.