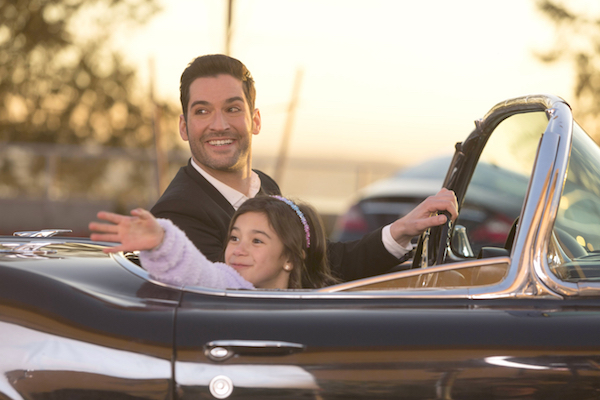 Lucifer opens inside the penthouse while Lucifer (Tom Ellis), Amenadiel (D.B. Woodside) and Charlotte (Tricia Helfer) ponder their options. It turns out, Lucifer hid Azrael’s blade right under their noses. He punches through the penthouse wall, and pulls out the previously missing weapon. According to Charlotte, Lucifer is the only one of them with the power to ignite the flaming sword. Lucifer takes the weapon in his hand, but can’t muster the energy. It seems he’s not angry enough. Even a sucker punch from his brother fails to make Lucifer angry enough to light the blade.

Later, Lucifer sits down with Dr. Martin (Rachael Harris). While they talk, they hash out everything going on around him. However, she responds quickly to Lucifer’s road-blocks. He is putting up walls. She can’t help him if he is going to put up walls. The conversation is short lived as he is called to a crime scene.

The team mull around a fancy apartment. A woman lays dead in a pool of blood, a large stab wound in her back. This is Debbie. Apparently, Debbie worked as an admissions director for a preppy, progressive Los Angeles private school. It seems LA schools aren’t like other schools…

While he tours Starford with Chloe (Lauren German), Lucifer is intrigued when he hears the school provides their students with the tools to control their emotions. It seems he desperately needs to control his emotions in order to use the flaming sword.

The visit to Starford provides the team with a single lead. It turns out, Debbie fought with a couple of prospective parents just days before, when the school turned down their son’s admissions application. The confrontation became hostile enough that one of the men threatened to kill Debbie. While the men plead their innocence, a police officer enters and whispers in Chloe’s ear. It seems the murder weapon was found in their pool house…

Later, Chloe starts as she turns around in her kitchen to see a smiling Lucifer. “I’m going to put a bell on you!”. Chloe is frazzled as she finds Trixie (Scarlet Estevez) not ready for school. However, this gives Lucifer an idea. He quickly offers to take the young girl to school in order to help her busy mother.

However, school isn’t quite what’s on Lucifer’s mind. They pull up in front of Starford Academy. Trixie looks up at Lucifer, mentioning how mad her mom is going to be. There is a gleam in the girl’s eye; however, as she introduces herself to a school official as “Trixie Morningstar”. 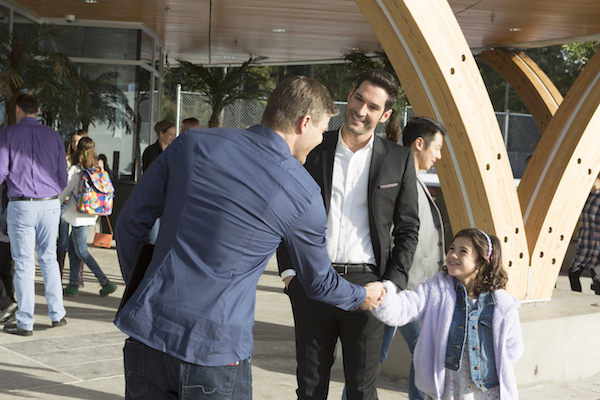 While Lucifer and Trixie tour the school, Dan (Kevin Alejandro) and Chloe question the Headmaster (Geoffrey Owens). With little incentive, the man tearfully admits to embezzling money from Starford. Could this be the motive behind the killing? However, Chloe is called away when she learns Trixie’s “father” brought her to sit in on a class.

Chloe hovers in the background, watching the goings on in one of the classrooms. She is stunned to hear her daughter admit to a teacher (Alison Becker) that she tries to not burden her mother with her problems. Lucifer sits next to Trixie, growing increasingly frustrated. He needs to learn how to turn emotion into energy darn it. However, attention shifts to a little boy who is drawing a picture. When asked what it is, he holds it up. “It’s of my mommy stabbing Debbie”.

Later, Chloe sits across from the mother in question (Emily Holmes). When questioned about the picture, she tells the police that she merely talked about killing Debbie. She’s a single working mother, and Starford is a stressful environment. It turns out, she’s been having a passionate affair with the school’s “Health and Wellness Mentor” (Ryan Bittle). Was there a risk of the affair going public?

Luckily, Chloe quickly discovers that Starford is offering Trixie a spot for the upcoming academic year. However, she needs to attend a “grieving gathering” at the school to celebrate Debbie’s memory. When she checks in, the receptionist sizes her up with a judgmental eye. “Just you? That must be tough”. However, Maze (Lesley-Ann Brandt) suddenly materializes next to her and wraps an arm around Chloe’s waist. Before Decker can react, the demon plants a kiss on her lips.

Meanwhile, Lucifer returns home to find Amenadiel waiting for him in the dark. It seems Amenadiel is feeling a bit ignored by their mother.

Later, Chloe and Maze come up with a plan. These rich private school parent’s thrive on one thing… gossip. While Chloe watches, Maze tells a number of the parents that evidence exposing the killer is in Chloe’s car, and she’s really close to making an arrest. Perhaps this will coax the killer to make a move… 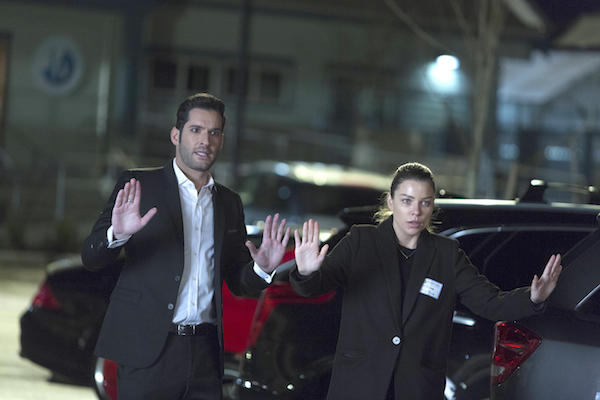 Their plan works like a charm. However, what Chloe doesn’t anticipate is Lucifer getting there before her. They can only put their hands up as the killer turns out to be the teacher from Trixie’s class. In fact, it wasn’t just the mothers sleeping with the “Health and Wellness Mentor”. Debbie found out that the teacher had a baby with the pleasantly clueless gym teacher, and threatened to expose her secret. Hence, Debbie needed to die…

Later, Lucifer sits in the dark with Dr. Martin. While they talk, he finally comes clean with her. He is planning to use the flaming sword to open the gates of heaven. However, he doesn’t intend to stay. Rather, he wants to kick Charlotte inside and slam the gate.

As the episode comes to a close, Lucifer huddles with his Mother and Amenadiel. As his family watches, Lucifer is finally able to work the flaming sword. However, as Charlotte steps into an elevator she looks rattled. She pulls a bandaid off her wrist, flooding the elevator in an etherial light. What is wrong with Charlotte?