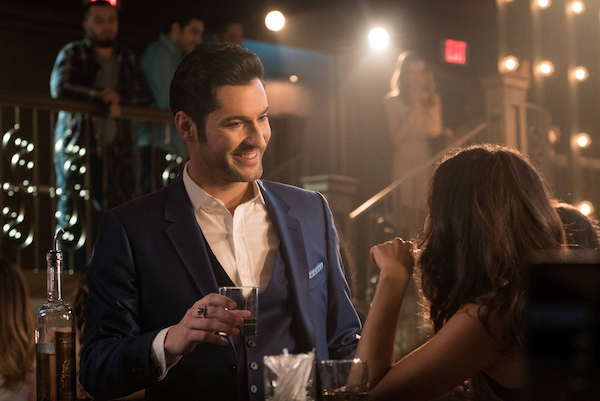 Lucifer opens inside Lux. Charlotte (Tricia Helfer) passionately makes out with a much younger man. She stops, “Why did my son abandon me?”. He blinks, “This is getting weird”.  She stands up, “You’re a terrible kisser!”.

Meanwhile, Lucifer (Tom Ellis) sits across the table from a couple of imposing, mobster stereotypes. The cliche isn’t lost on Lucifer, who smirks as he passes a bag across the table. The man looks him over, “It’s your funeral”.

The next morning, Chloe (Lauren German) and Dan (Kevin Alejandro) walk across the street and duck under some crime scene tape. A young man’s body lays in the middle of the street. A massive head wound looks like a fairly obvious cause of death. Chloe bends down and finds a brochure under the body, it seems the young man fronted a band. Is this a clue?

Related: Check out recaps from the first half of Lucifer’s second season, here.

Later, Chloe returns to the station. As she goes over the case with Dan, she stops when she hears a familiar voice. Turning around, Lucifer looks her over, smiling. However, Chloe is not thrilled to see him. Furthermore, the detective looks ready to burst as a scantily clad blonde (Lindsey Gort) comes down the stairs. She’s young, beautiful, and wearing a large wedding ring. Lucifer smiles, “Meet Candy Morningstar, my wife”. 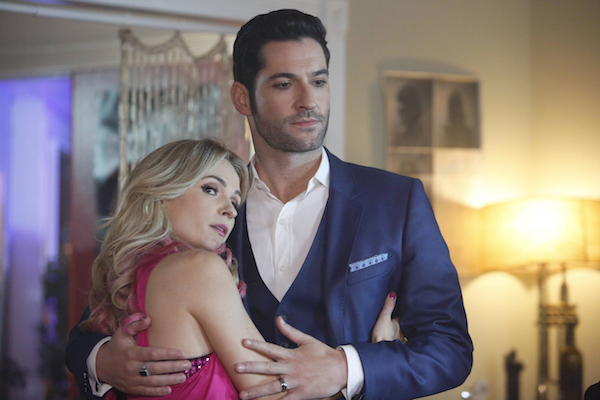 While there’s still a lot of emotional baggage Chloe and Lucifer need to unpack, Chloe pauses to interrogate the victim’s wife. Though others describe her as a “psycho b#t@h”, the woman actually seems quite grounded and Chloe seems to understand her. Furthermore, she also provides an easy alibi. It seems she was at work at the time of the murder.

Later that afternoon, team Lucifer stands staring at the case board. Chloe is stunned as Candy immediately points out a suspicious looking man pictured in the crowd. It turns out, Candy doesn’t get a lot of “names” at her job, so she’s really good with faces “and other things”.

With a potential new lead, Lucifer is raring to go. However, Chloe stops him. He can’t simply waltz back into their lives and pretend that nothing is different. Not only did he hurt her feelings, but he hurt her trust. Chloe quickly walks away, leaving Lucifer alone in the middle of the crowded station.

However, typical Lucifer fashion, he looks passed the obvious trauma. He’s suddenly all smiles as he sits down with Candy to see Dr. Martin (Rachael Harris). As the conversation develops, Lucifer has an idea. He knows how to get back on the case…

Later, Dan talks on his phone, but can’t ignore the large figure stalking him from behind the bushes. It’s Lucifer…

It seems Lucifer’s idea is for he and Candy to go undercover inside a mediator’s office. It seems the mediator was closely involved with the band, and can hopefully give them some insights on the case. Across the room, Candy bends over the counter, touching up her make-up. Maze (Lesley-Ann Brandt) looks the girl over, an amused smile crossing her face. “Lucifer has outdone himself”. 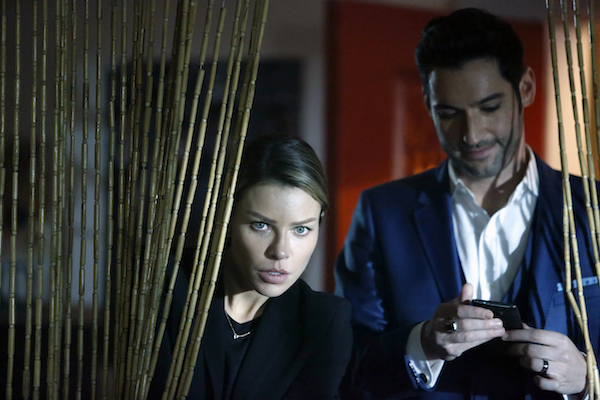 However, Lucifer’s trials are not over, as he still needs to visit his mother. “Who’s your top heavy friend?” Charlotte asks, looking the girl over. There’s a note of ambivalence over the scene as Charlotte suddenly changes her tone, and whisks the girl away to go shopping.

“Lucifer always comes back around, Chloe,” Maze says while the women talk over a cup of coffee. However, Chloe is blinded by her frustration, and isn’t hearing her. But, Maze quickly says something which gives Chloe an idea. Maybe it isn’t Lucifer and Candy who should go to the mediator…

Later, the action shifts to the mediator’s office in mid session. Lucifer sits inside with a smirk on his face. The camera pans up a very stripper-like shoe, eventually coming to rest on the face of his partner. It’s not Candy; rather, Chloe plays Lucifer’s wife.

However, Lucifer’s grin suddenly disappears as Chloe’s gloves come off during the session. Quickly, their actual grievances are brought to the forefront. “Have you ever known me to lie?” Lucifer asks. Chloe’s response is clipped, “I don’t know”. The moment is soon interrupted when the therapist suggests a break.

While they are getting a breath of fresh air, the mediator (Jonathan Togo) slowly approaches Chloe. The two quickly hit it off, but the investigators quickly expose their identity when the man considers a payoff offer from Chloe. After Lucifer works a bit of his magic, the mediator opens up to them. It seems he’s simply a frustrated band manager.

“Did he say anything about matricide?” Charlotte asks Candy as the women window shop in Beverly Hills. Candy shrugs and tosses her hair, “No, I think the mattress in the penthouse in pretty new”. Could her son’s new wife really be so painfully unthreatening?

Later, Charlotte meets with Amenadiel (D.B. Woodside). “(That woman) is a sinister genius!”. Could Lucifer be so far gone that he would simply marry this “simple dullard”? Emotion builds in Charlotte’s face as she continues, is she responsible for breaking her son? 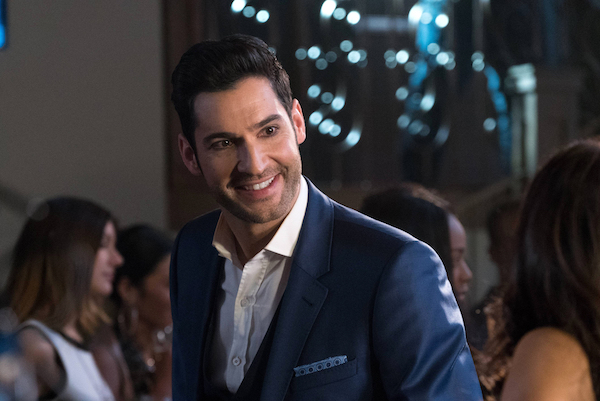 Meanwhile, Chloe sits inside the police station. She looks up at a record cover while she and Dan discuss the details of the case. Suddenly, she has an epiphany. One of the band members clutches a bass in the picture. Could they have found their murder weapon?

Chloe returns to the club to investigate, but stops abruptly when Lucifer climbs onto the stage. The story pauses as Lucifer sits behind a piano and serenades the club with a smooth version of “Eternal Flame”. However, the devil also has ulterior motives as he uses the audience (now on his side) to corral the band’s base player Marla (Minni Jo Mazzola).

While the investigation continues, Amenadiel meets Lucifer at the station. In a simply played, powerful moment the two brothers know each other far too well. It seems Lucifer is protecting Chloe by holding up a “shield made of Candy”. He’s still struggling with the revelations in the winter finale. Are Chloe’s feelings for him true?

Later, Chloe and Dan discover another lead while they interrogate Marla. She isn’t their killer; rather, she only ran from the police because she runs a lucrative fake ID business inside the club. However, while they talk, they look at security footage from the club and discover that Marla wasn’t the last person to touch the band’s equipment. Rather, it was another band member Doug (James Neate). While the police stand up to arrest their new suspect, Dan sees an opportunity. He stays behind, sending Chloe off with Lucifer instead. 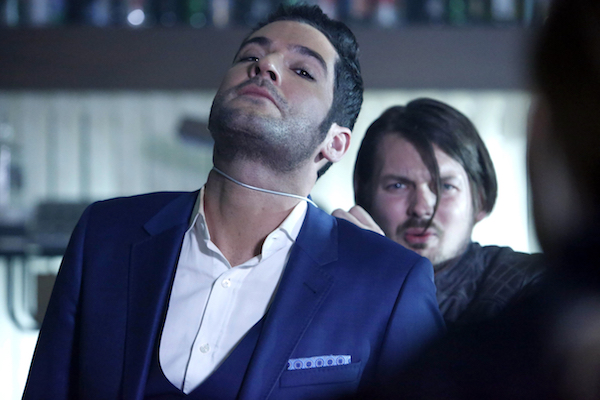 Walking through Doug’s darkened apartment, the young musician surprises them and wraps piano wire around Lucifer’s neck. There’s a emotional moment as Lucifer (straight faced) tells Doug to simply kill him because the Detective “doesn’t need him anymore”. Chloe, struck by his comment, fires her gun, hitting Doug in the shoulder. It seems all is well.

Lucifer later returns to see his mother, who is struggling to write him a letter. While they talk, he honestly and simply expresses his hostility towards everything she’s done. However, as he prepares to leave, she stops him by dangling a tantalizing clue in front of him. It seems their previous battle in heaven was lost because they didn’t have the flaming sword. However, the ultra powerful weapon is now in their possession… It’s Azrael’s blade.

Later, Lucifer bids farewell to a much changed Candy in front of the penthouse. In fact, she wasn’t the simpleton she appeared to be. Rather, she is a professional con-artist hired by Lucifer. She looks him over, “(Chloe’s) none of my business, but I wouldn’t screw that one up”. Even she can see there’s something between Lucifer and Chloe.