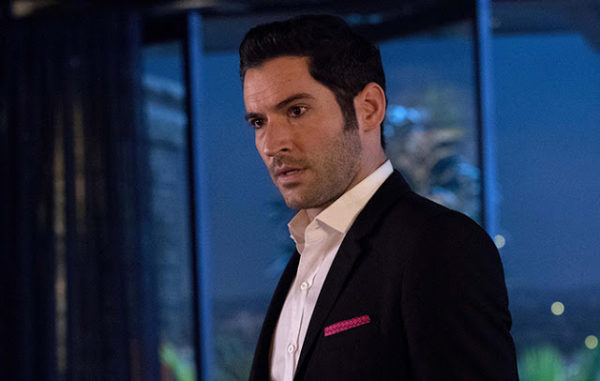 While the opening credits roll, we see a normal day on the beach. A woman (Lisa Chandler) rides through the pleasant summer scenes, enjoying the California sunshine. The moment of peace is immediately shattered as she is knocked off her bike by a hooded figure. He chases her through the crowd, tackling her. She barely has time to mumble “It’s you!” before the murderer stabs her repeatedly.

Since we last saw Lucifer, he had broken Dr. Martin (Rachael Harris). As a result, they’re attempting to fix their relationship. While Lucifer talks, it’s clear that she isn’t listening. The moment leads to some of the best laughs of the episode. Linda breaks his train of thought, saying, “What about Hitler?” Lucifer stops, this isn’t what he was expecting her to say. “The Sandwich is Hitler?” Lucifer get’s a call, there’s been a murder.

As the investigators quickly arrive at the crime scene, Dan (Kevin Alejandro) is already there. He leads them to the victim, Maddie Howard. Dan also offers them a camera, revealing that a tourist had captured a photograph of the attack. While they look at the graphic image, Lucifer’s entire demeanor changes. Lucifer gives no excuse as he hurries off, leaving the investigation team by themselves.

Later, Lucifer takes Maze (Lesley-Ann Brandt) and Amenadiel (D.B. Woodside) to the deserted spot where he buried his brother. Approaching the grave, they discover it has been dug up. While Uriel’s body is still there, something more important is missing. Azriel’s blade.

Azriel’s blade calls to humans. In fact, it amplifies rage, allowing the weapon to live out its’ true purpose, to kill.  Maze asks, “So, if someone leaves the toilet seat up…”. Lucifer’s response is quick, “Trip to stabby town, yes.” As a result, it’s urgent that they find the weapon, which not only can kill humans, but celestial beings as well.

Lucifer goes to visit Ella (Aimee Garcia), and negotiates with the young tech to investigate the dug up grave. And it doesn’t take her long to discover not only a man’s shoe print, but a burnt piece of paper. Lucifer leaves her as she’s trying to decipher the paper, and returns to the Detective.

They visit a yoga studio, searching for any clue they can find to the murder. While there’s plenty of strange behavior, there’s nothing that comes off as overly suspicious.

Returning to the police station, Ella manages to rehydrate the burnt piece of paper, discovering two things. First, that it was a map, leading from downtown LA, to the very spot of the grave. Secondly, she recognizes the logo for a law firm, which is very familiar to Lucifer. He leaves quickly, paying Mum (Tricia Helfer) a visit.

It seems like Lucifer barely has to question Mum before she reveals that she wanted the blade to be discovered. She brought 15 of her craftiest clients up to the grave. Furthermore, she admits to Lucifer that she was trying to get her absentee husband’s attention. And much to her frustration, it didn’t work. She gives Lucifer a list of the clients who may have the blade.

Back at the station, Dan is having issues. Someone ate his pudding. “A man’s snacks are sacred!” He says, as Lucifer walks up, surprising him and Chloe. Meanwhile, as Lucifer catches sight of Chloe’s notes, there’s one name which corresponds to the list his Mum gave him, Duncan Watts. Duncan, it turns out, is a lawyer with offices above Maddie’s yoga studio. He had also been in conflict with Maddie as the two were fighting over a parking space. However, as they return to the studio, not only do they find Duncan dead, but an entire yoga class has been massacred with the blade.

Surrounded by the bodies, they analyze the crime. As Ella stands up, she backs up Lucifer’s hypothesis. The knife had been passed around in “a game of murderous hot potato”. It wasn’t a murder, it was a full on yoga massacre. However, there’s a body missing. Jenson Glory (Ryan Alosio), the head of the studio had been teaching the class, and is now suspiciously missing.

Lucifer returns to Dr. Martin, still trying to work his way through his personal demons, but he has rocked Dr. Martin’s world. As their session continues, patient and client have switched placed. The two have no secrets now. As they talk about the Angel of Death, we learn that Azriel is actually Lucifer’s sister. Linda does a double take, “The Angel of Death is a chick?”. Frustrated with the Doctor, Lucifer hurries off. Glory has been found.

While interrogating the yoga guru, Chloe and Lucifer quickly discover that the man is a complete fraud. He rips off a corset he’s wearing under his shirt, a massive gut spilling free. He’s far from the slim and trim yoga master they had expected.

Furthermore, this fact is only confirmed as Amenadiel and Maze return from Glory’s house. There’s no sign of the weapon, the only thing they found was a basement full of Pop Tarts, which Maze steals, bringing them back to the apartment with her.

Everyone converges on Lucifer’s apartment. Ella shows up on edge. The boot tread in Lucifer’s case, matched Watt’s boots, showing her the two cases were connected. She threatens to turn Lucifer in, but the two are quickly able to make peace. He is the devil, after all. They share a hug as Chloe arrives, setting the Detective’s mind wandering that the two are having some kind of illicit affair under her nose.

Lucifer shows up to Glory’s house and finds the blade. However, the knife is buried deep in the chest of Jenson Glory. Corrina Huff (Andrea Bogart), one of Maddie’s coworkers, stands over the body. She’s in complete shock, having only just emerged from the blade’s control.

It seems like the episode is coming to a close as the blade goes missing once again. Lucifer finds it in the hand of “Detective Douche… Dan! Daniel!”. The Detective is completely under the spell of the blade, and the angry expression on his face shows that he wants nothing more than to bury it deep in Lucifer’s chest. Not only does Dan feel that Lucifer hurt his career and his marriage, but he ate his pudding. Faced by an angry detective with a knife, Lucifer’s forced to admit it. He ate the pudding.

Returning to the station, the weapons has gone missing yet again! Chloe’s on edge, and it’s about more than just the blade. Ella and Lucifer’s hug got to her. However, when Lucifer broaches the subject, the thought of them being anything more than they are, is still too much.

As Lucifer and Amenadiel meet up with Mum back at the apartment, the season is building to conflict. There’s lines drawn, with Lucifer alone in his sea of family drama. As Mum and Amenadiel finally argue their case to return home, Lucifer makes his view clear. Heaven wasn’t home for him. Hell wasn’t home. This is home. As Mum leads Amenadiel away, there’s going to be drama.