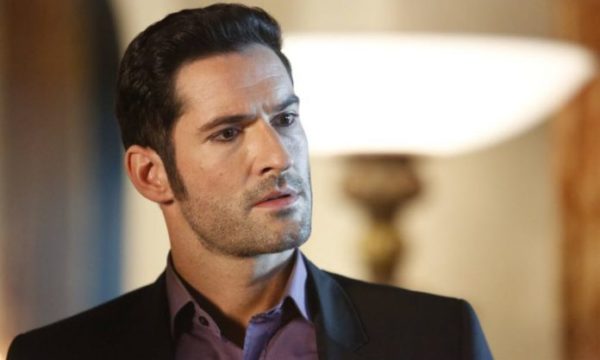 Previously on Lucifer: The King of Hell (Tom Ellis) had broken his therapist (Rachael Harris).

This week’s episode opens on a flashback. Officer John Decker (Chris Payne Gilbert) visits a convience store. The bright eyed officer chats personably with the clerk, offering him tickets to his “little monkey’s” movie, Hot Tub High School. This is Chloe’s (Lauren German) father. A robber bursts in, unloading two quick shots into Officer Decker. Chloe’s father has been very much a mystery throughout the narrative, despite meeting her movie star mother (Rebecca De Mornay) in the first season. He is why Chloe is who she is.

Jumping back to present day, Lucifer arrives at the police station. He’s just freaked out Dr. Martin and is in need of a sympathetic ear. However, this isn’t Chloe at the moment. She’s discovered that Joe Fields, her father’s killer, has been granted family leave from prison. She could not care less about Lucifer’s problems right now as she calls the prison, trying to cancel the leave.

When Dan arrives, he’s immediately able to tell there’s something wrong with his ex-wife. This gives Lucifer an idea. He’s going to the school of Dan (Kevin Alejandro). Lucifer tells Chloe, “I’m going to learn to douche… I’m going to have to rephrase that one.”. Lucifer feels toxic, and that he hurts everyone around him. However, Dan seems like the polar opposite. Everyone loves him. Thus, Lucifer decides he’s going to figure out exactly what makes Dan tick.

Chloe visits the prison in one last attempt to stop Field’s family leave. According to the Warden (Alex Fernandez), Fields was a model prisoner for the last decade, and was granted leave for his granddaughter’s christening. This stings. As Chloe points out, John Decker couldn’t see her daughter’s christening.

Leaving the prison defeated, Chloe makes the questionable decision to follow the police transport vehicle, and stumbles on a murder scene. The police van sits in the middle of an alley. Not only have the transporting officers been killed, but Fields is dead as well.

Chloe goes home. Not only is she too close to the case, but she also looks like a suspect. Meanwhile, Dan and Lucifer take control of the investigation.

As Chloe cooks an egg sandwich for Trixie (Scarlett Estevez), Maze changes quickly for a job interview. When asked what the interview is, Maze (Lesley-Ann Brandt) replies “A pre-school aid… I’ve dealt with filthy screaming humans, at least these are smaller.” As the demon leaves, the doorbell rings again. A woman enters, a gun pointed squarely at Chloe. Tina Fields (Caitlin Stryker) is barely clinging to her sanity. Not only has she just lost her father, she’s convinced Chloe is the killer. However, the two women are painfully similar. When Trixie hurries out of her bedroom, coming to her mother’s defense, Tina realizes that they are the same. They are both not only mothers, but daughters mourning the loss of their father.

Tina shows Chloe a video which she received from her father’s attorneys. In the tape, Fields continues to claim his innocence in the death of Officer Decker. Examining the video Chloe realizes there was no way Fields could have killed her father. He was miles away from the crime scene only minutes before the robbery.

As Chloe charges ahead, desperate to crack her father’s case, Dan and Lucifer continue on the Field’s investigation. As the two men roll up on a small food stand, Lucifer climbs out of the car, dressed exactly like Dan. He throws himself into the role. They are easily able to take down their suspect, Rodney Lamb (Ronnie Gene Blevins). However, it’s probably too easy. In fact, Lamb wanted the police to catch him. It only takes a little prodding for Lucifer to drag the truth out of him. In exchange for a false confession, his family would have been financially set for life.

Dan and Lucifer, or “Douchifer”, go undercover to a turkish bath where Boris Sokolov (Charles Halford) runs his business. The Russian, human lie detector is a major organized crime figure, and is brought down by an undercover Lucifer (in a powerful character moment) taking out a hit on himself. Due to this success, they secure the information pinning the both murders on the prison Warden.

As the episode comes to a close, Chloe finally gets her man. The Warden had set up a deal with Joe Fields to take the fall for Officer Decker’s death. Yet, with the birth of his grandchild, Fields found himself rethinking the arrangement. Why would he want to stay in prison? With his fall guy asking questions, the Warden has one choice, he kills Fields. In a moment of poetic retribution, Chloe gets the satisfaction of sending her father’s killer to the prison he helped run. Lucifer says to Chloe, “I think your father would be proud of you.”. It’s a very moving moment.

Everyone in the episode struggles with their identity. Lucifer wants to be like Dan. At the same time, Dan wants to be more like Lucifer. Lucifer uprooted Maze’s life, and the demon is struggling to define herself in her new role. Team Lucifer is undergoing some substantial growth this season, and these characters are becoming more interesting with each passing week.