I’m a big fan of games that give my brain a workout. I love it when a game provides tough choices, whether strategic, tactical, or both. The Lost Expedition by Peer Sylvester (art by Garen Ewing) is a game that fits the bill. This (mostly) cooperative game is published by Osprey Games and plays 1-5. I got a chance to play a few solo games and I can tell you, the game is quite challenging. Now I’m champing at the bit to try it out with more players. 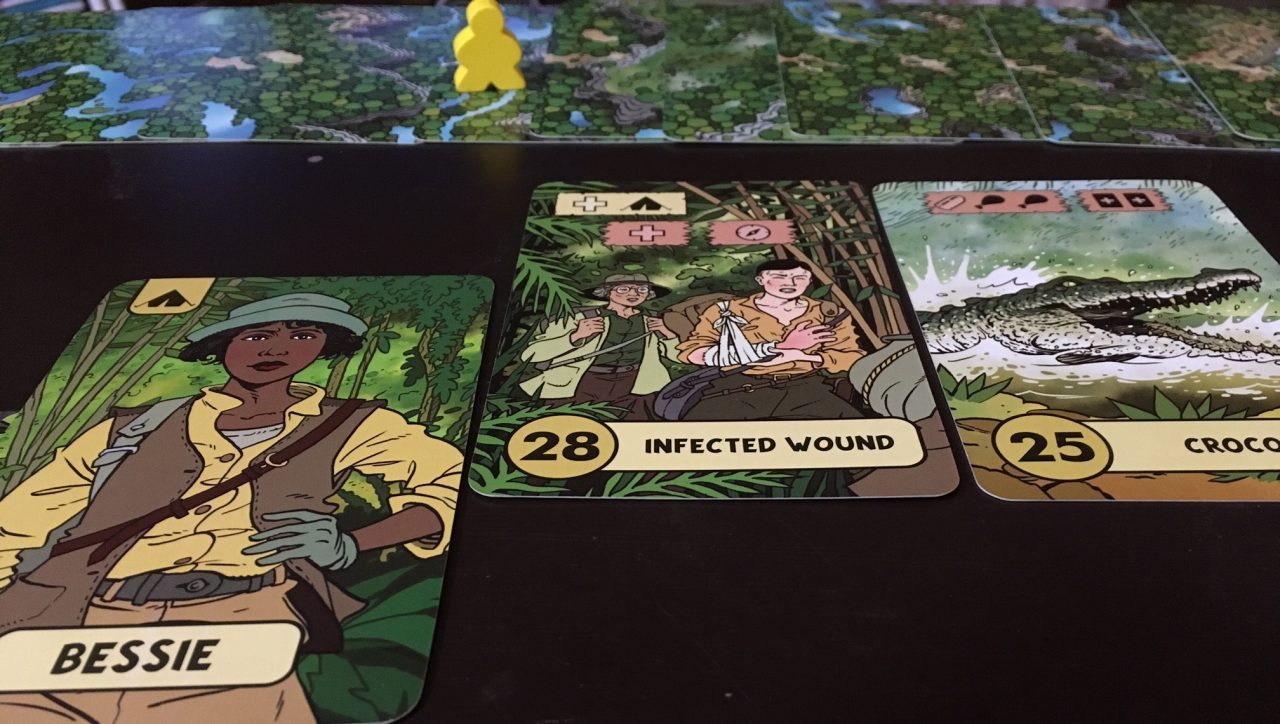 The game is simple. All you need to do is get a meeple (representing your 3-person party) from one end of the Brazilian jungle to the other. This requires only moving forward 7-9 times depending on your difficulty level. But the jungle is full of surprises, many of them deadly, and surviving isn’t easy. So far my groups have all died – fevers, mudslides, unfriendly natives, and even a heavy downpour have done us in. The game takes place over rounds that alternate days and nights. Each day and night, cards are played into a row in the middle of the table. In the solo version there is a set pattern of how cards must be played (a combination of the deck and hand) and in multiplayer, players take turns playing cards from their hands. 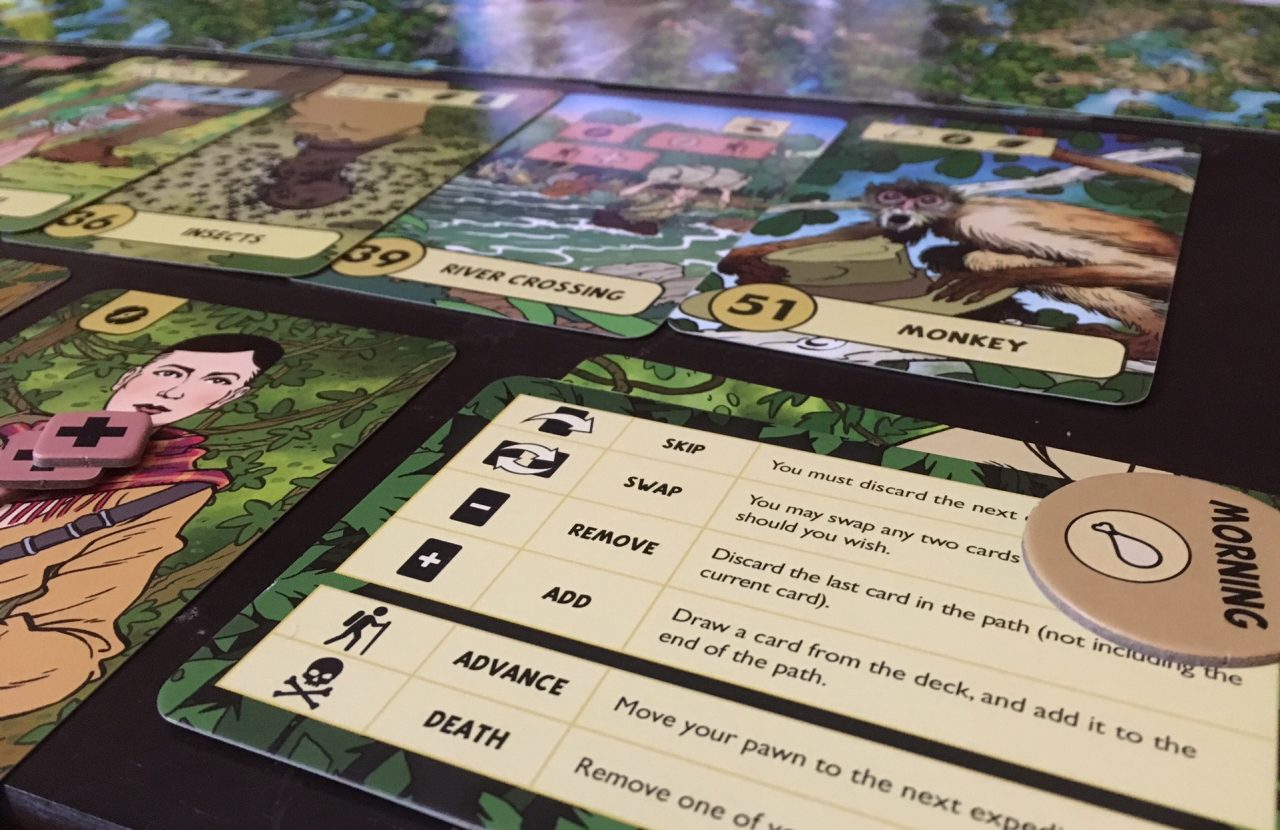 During the day phase players draw a fresh hand of cards. Players then take turns playing cards such that half of their cards end up on the table in a row. Once all the players finish playing half their hand, the played cards are resolved from left to right. Most cards result in losing a resource to avoid getting wounded or some other calamity. For instance, a card may require you to build a shelter (and remove a resource marked as such) to avoid a wound. Or maybe you’ll need to spend a compass resource to move the meeple one space closer to victory. Once all the cards are resolved, you remove one food resource from the party and move to night time. At night, players will play the rest of their cards, resolve them, spend a food, and move to day time, where they will draw a fresh hand of cards and do it all over again. The game continues until either all three members of the party die, or the meeple makes it to the last card. It is also possible to lose if the party has gone through the card deck twice and still hasn’t made it out of the jungle. 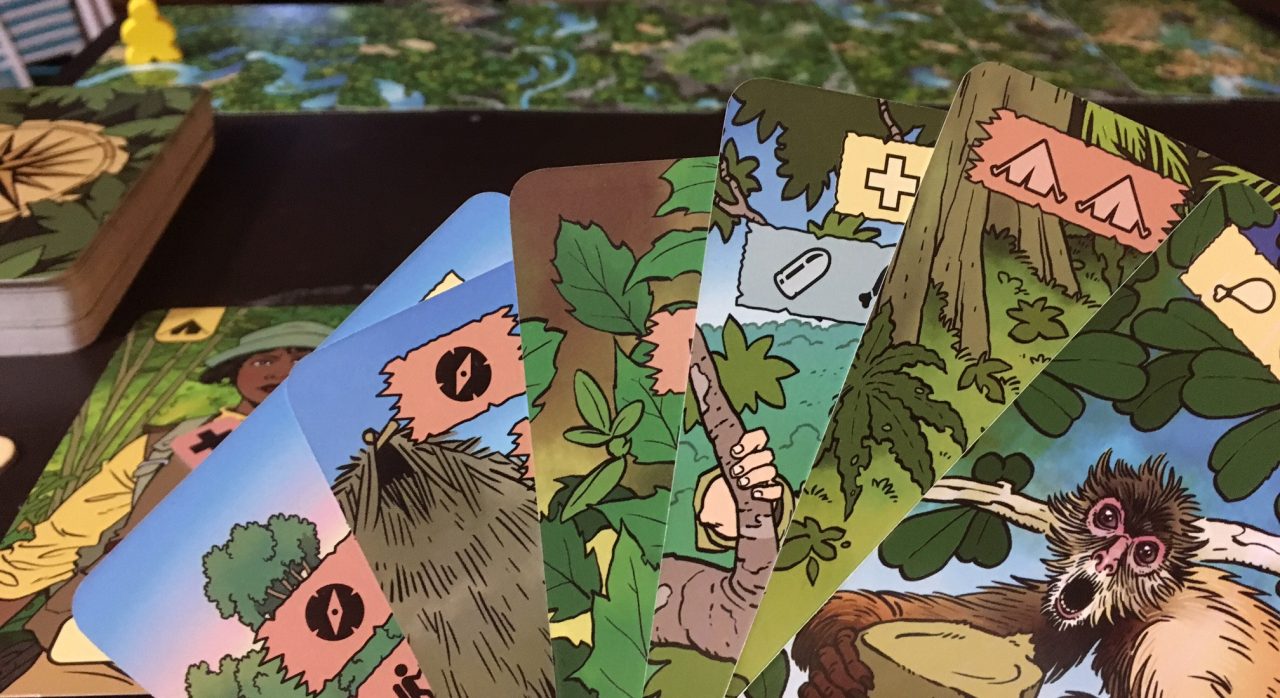 The descriptions above might make the game sound a bit mechanical. And maybe it would be. But the theme and art marry perfectly with the mechanics to make The Lost Expedition an immersive experience with tough decisions which are quite rewarding when made correctly. Each set of cards played during the day and night phases create a puzzle to be solved. Some decisions are tactical, as you have to deal with the immediate problem of getting past each card currently on the table, one at a time. But decisions are also strategic because you have to try and manage the party’s resources in order to be prepared for the unknown that is to come in future phases. 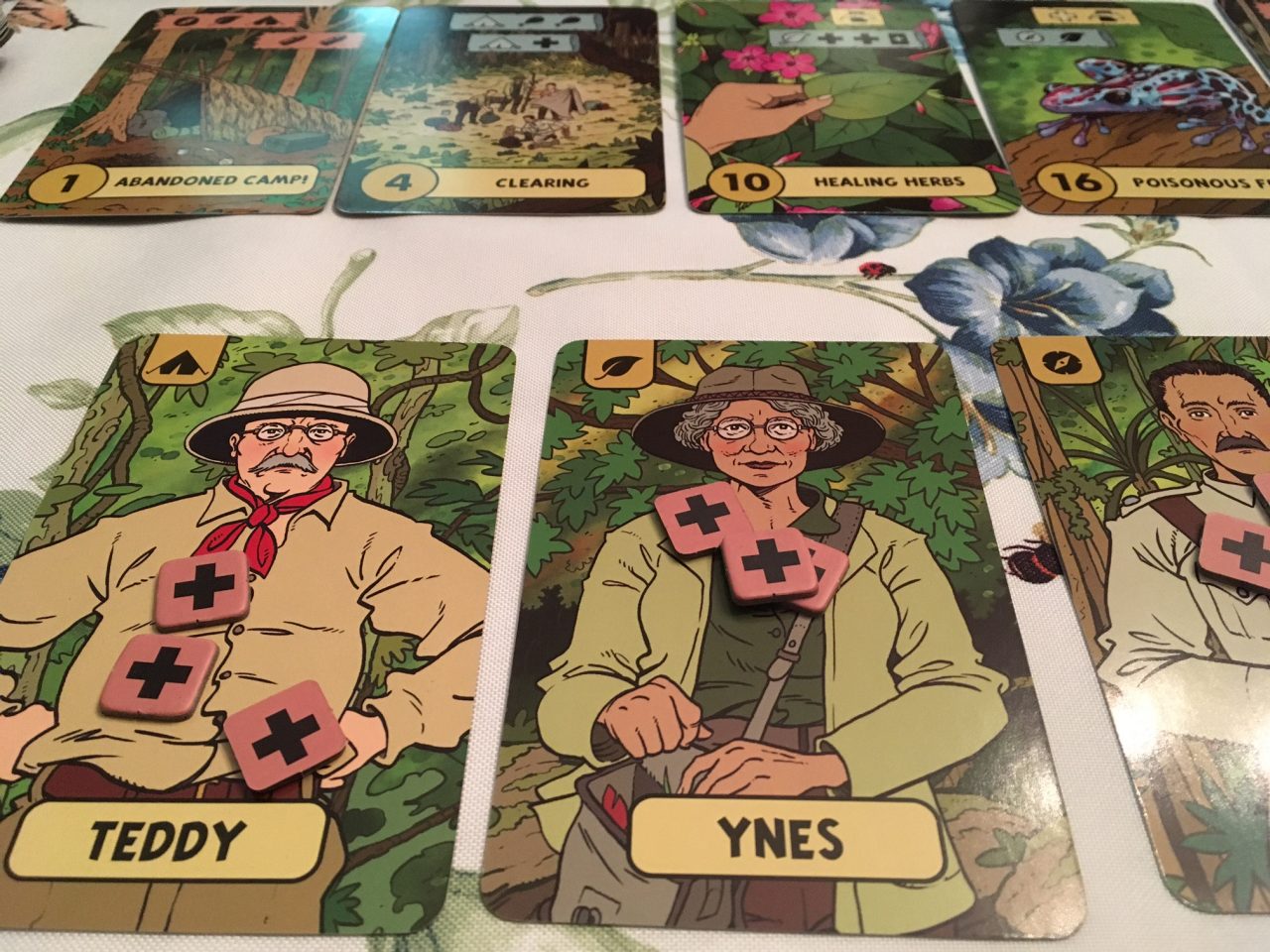 My experience in the solo play provided challenge after challenge. Just when I thought I was making progress, I realized I needed a resource I didn’t have. Sometimes I would be able to work my way through a day phase, just to draw cards from the deck in the night phase that I had no chance of overcoming. The Lost Expedition reminds me of two great games which I have enjoyed many times – Friday and The Grizzled. Like Friday, a player can have the solo experience of using his or her mind to maximize resources to overcome challenges that each newly drawn card throws at you. Like the Grizzled, players can discuss strategy, but cannot reveal what cards they have in their hands. Like both of those games, The Lost Expedition will probably have me and my friends losing more than winning. I can easily foresee some games ending in brutal defeat and great sadness. 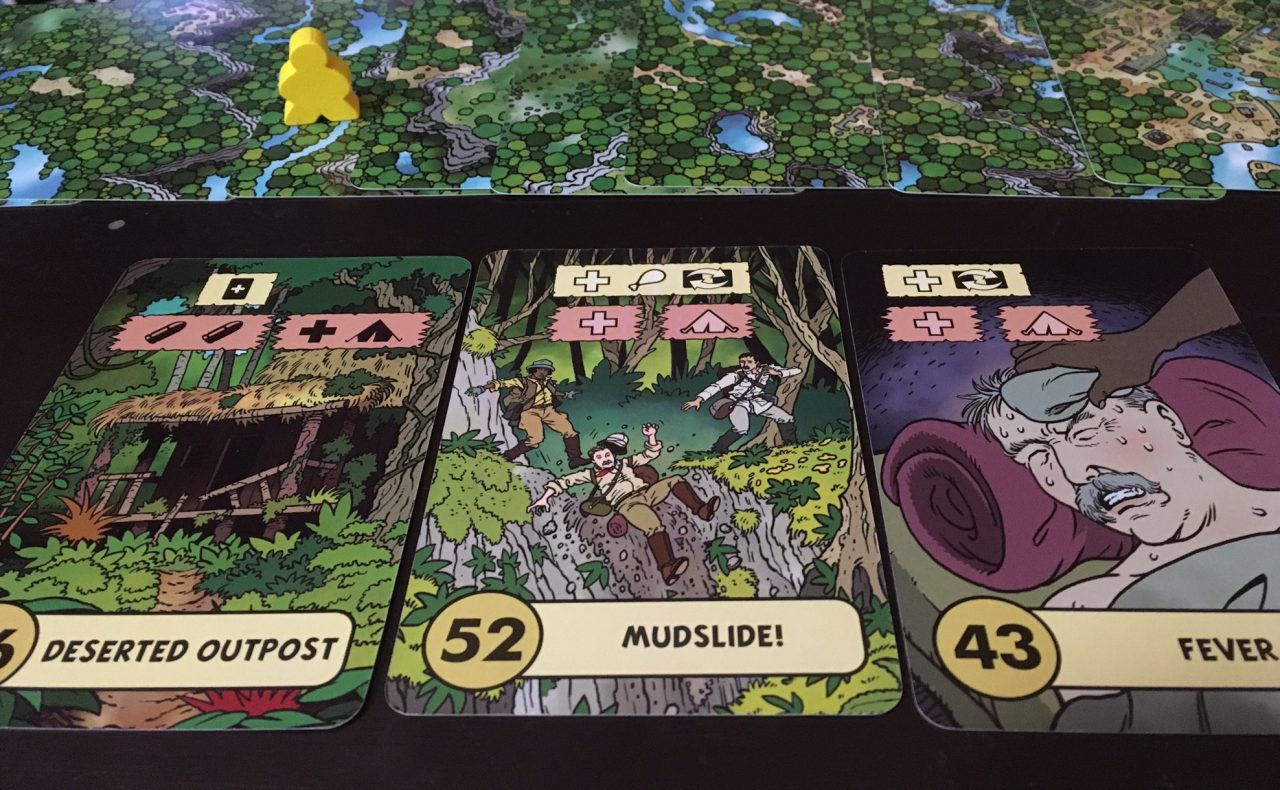 But I suspect that is what will keep me coming back for more – victory so close, yet so undeniably unattainable. So many times I have lost a game of The Grizzled and multiple players will agree to play again immediately. What can we do this time that will make the difference? I KNOW there is a way to win this thing! With a sound level of difficulty and a short playing time (right around 30 minutes) The Lost Expedition falls squarely into that space. I think it will be a great game to play a couple of times in a row to see if we can beat it. If not, fine, we’ll get it done next time. If so, ecstatic high fives around the table (or to myself – how sad). Nevertheless, I am looking forward to sweating it out in the jungle many times more.

Thanks for reading, and keep nerding on.