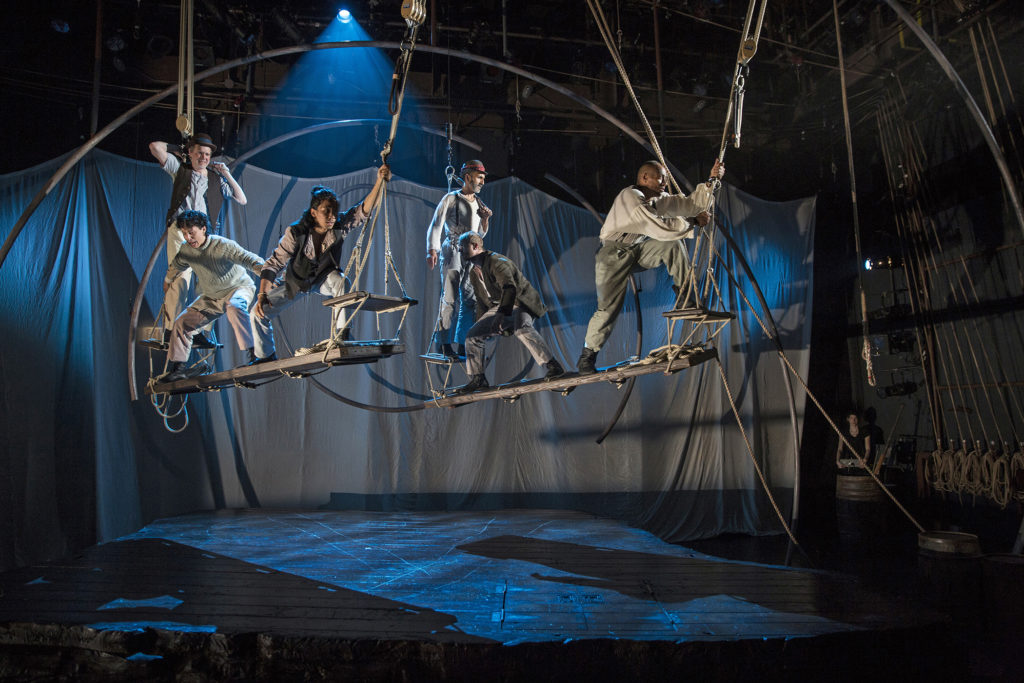 South Coast Repertory, Orange County’s Tony-winning theatre, is staging a production of Moby Dick by Chicago’s Lookingglass Theatre that one might describe as “Moby Dick meets Cirque du Soleil.” With dialogue and a plot that originate very literally in Melville’s classic novel, this production invokes the spirit of the source material through creative stagecraft and dazzling aerial acrobatics.

The play, which is a co-production with Alliance Theatre and Arena Stage, is strongest when it’s nonverbal. Kelley Abell, Cordelia Dewdney and Kasey Foster are especially captivating in the many roles they inhabit, acting as a chorus of fates, the ocean and the great White Whale himself. Although their physically demanding performances require them to sing, fly, run and climb in a variety of costumes, I was perhaps most impressed by the way they walked so briskly and smoothly in 19th century hoop skirts that they appeared to be gliding. 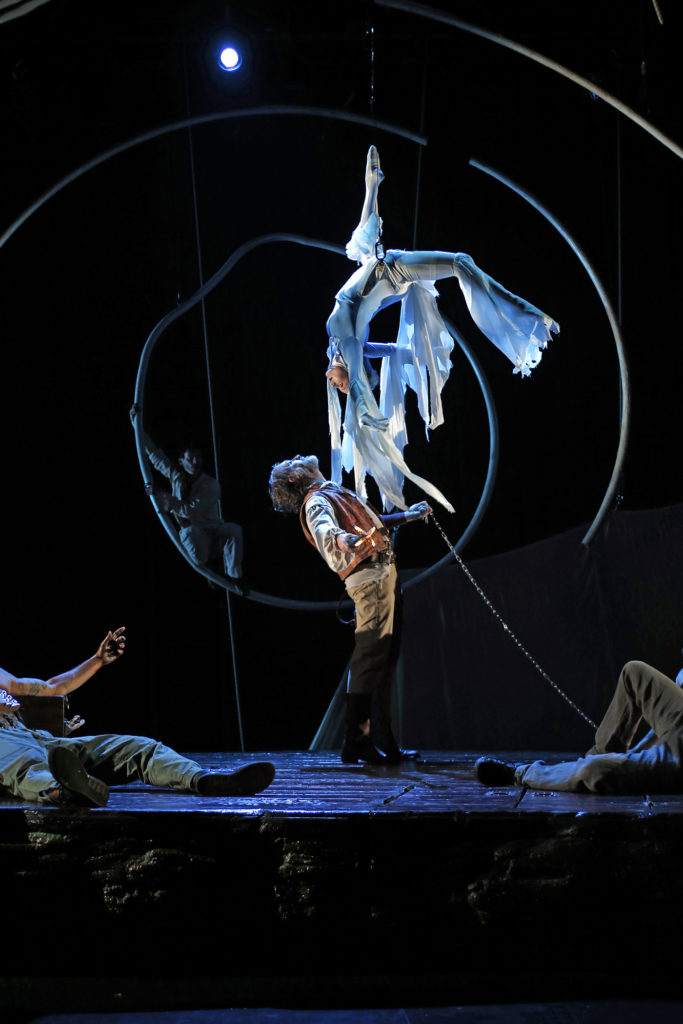 The production also provides a number of “gasp” moments, most of which are delightful surprises (although I feel like I can safely spoil for you that the fire alarm in act II is part of the play, and you don’t need to exit– not being 100% sure was one surprise moment I didn’t totally love). The first time I gasped and nudged my companion was when Ishmael (Jamie Abelson) and Queequeg (Anthony Fleming III) first boarded the Pequod and Micah Figueroa, playing Cabaco, climbed a set piece and held himself out from it perpendicularly for what felt like five minutes while Ishmael tried to mentally capture the moment at which his adventure was beginning.

If you’re a student reading Moby Dick for a high school or college English class and you live anywhere near Costa Mesa or Chicago (where the production returns in June), seeing this would be a terrific complement to reading the book. It’s definitely not a substitute, though. My companion for this show is a major Moby Dick lover, and he pointed out that the substance of Ahab’s (Christopher Donahue) motivation in the book is really about knowing the unknowable and controlling the uncontrollable, whereas in the play he seems motivated purely by revenge for the whale having taken his leg. The characterizations of Ishmael and Queequeg were also broadened to play to a theatre audience and not safe to base a book report on.

This production of Moby Dick was originally produced by the Lookingglass Theatre Company in association with Actors Gymnasium in Chicago. It runs until February 19th at South Coast Repertory.