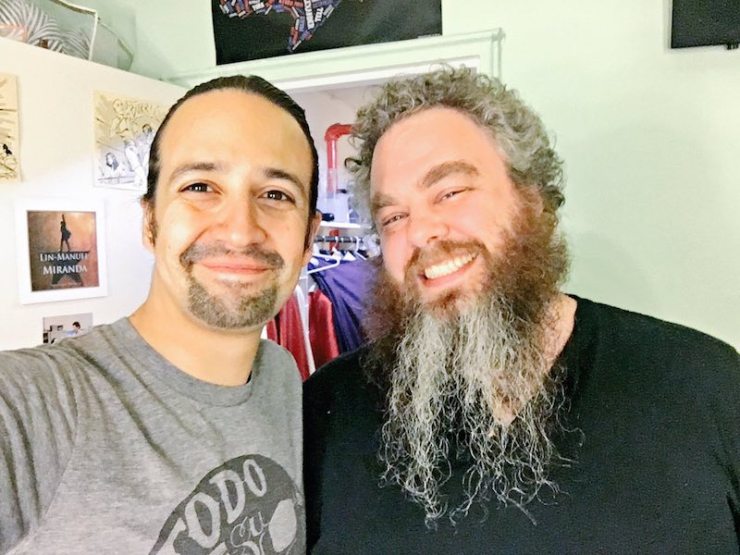 In the crossover event of the century (I can say that, right?) Lin-Manuel Miranda took to Twitter today to announce he will be producing the world of Patrick Rothfuss‘ Kingkiller Chronicle.

THE NEWS.
I just love the world of @PatrickRothfuss and I want to spend time figuring out how to share it with you. So this is happening. https://t.co/vwNFzxVj2W

Lionsgate announced today the acclaimed wordsmith will be the creative producer behind both the feature films and the TV series.  The films will encompass the novels in the fantasy series, The Kingkiller Chronicle, while the television series will “expand the world outside of the books”.  Basically, Lionsgate will do what Marvel once upon a time set out to do, have an interconnect world told on both big and small screens.

The first movie will be based on the first book, The Name of the Wind, although I don’t know how they will do it justice with just one movie.  It wouldn’t surprise me if each book gets split into at least two parts.  Unlike many other movies that have gone this route, this series actual warrant multiple movies.  The novels are not small in scope or size.

Music plays an integral part in Rothfuss’ world and Miranda will serve as both producer and “musical mastermind”, composing original music, as well as penning the lyrics.  Similar to what he did with both Moana and Hamilton.

“Lin is an incomparable talent and a huge fan of the trilogy and, working closely with Pat, his creative oversight of the franchise will bring an incredible level of detail and continuity to all of the projects,” said Erik Feig, Co-President, Lionsgate Motion Picture Group.

“Pat Rothfuss’ ‘Kingkiller’ books are among the most read and re-read in our home,” Miranda said. “It’s a world you want to spend lifetimes in, as his many fans will attest. Pat also writes about the act of MAKING music more beautifully than any novelist I’ve ever read. I can’t wait to play a part in bringing this world to life onscreen.”