Let’s Talk About PIRATES OF THE CARIBBEAN: DEAD MEN TELL NO TALES

The first official trailer for Pirates of the Caribbean: Dead Men Tell No Tales has come out and I’m underwhelmed. In the fifth and apparently final installment in the Pirates franchise, Jack Sparrow is up to no good for the 5th time. I’m glad they’re ending the franchise, but is this a film we need?

While it could be argued that we don’t need any sequel, this film just looks like a blueprint of all the others with most of the same characters. But that’s what superhero movies do, you cry out to me. Yes, but at least most are entertaining to watch. I do not find Pirates entertaining to watch anymore. The first movie was fantastic – original and fun. The second was odd but still enjoyable. By the third, I was done with the series. Then they made a fourth movie! They wrapped up the stories of the two heroes and essentially ended the franchise with the third. But they made a poorly received fourth with all new characters that we didn’t care about. It looks like the fifth is set to do the same. 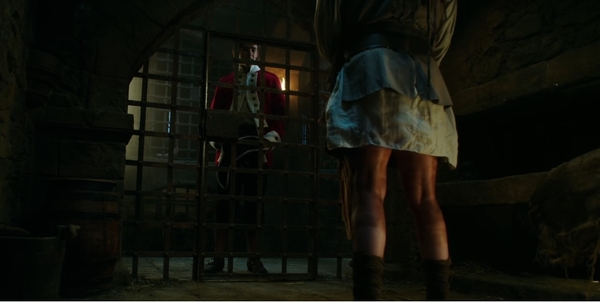 The dignity of this franchise in a screenshot

The first teaser trailer was interesting, if not something we’ve seen already. Ghost pirates? Meh. At least Javier Bardem is really going for it in his performance. Now we have the first official trailer and it looks pretty bad. Jack Sparrow is made to seem like a creepy old pervert who has narcolepsy. At least he still bumbles his way through situations? The story seems to mirror the first in the series – get the girl and get Jack Sparrow. The girl is important somehow, which we don’t learn in the trailer how or why. And she has a young suitor completely enamored with her. To top it all off, we have a creepy CGI young Johnny Depp! Yikes.

The series is known for the over-the-top action and silliness, especially to appeal to the younger audience. It feels overtired now. Jack’s outlandishness isn’t a whole story. It shouldn’t be. And yet it always seems to be one of the main focal points of the film. It all just seems so pointless to do. It’s nice to wrap up the series with a film but they could have at least tried harder. Maybe I’m being too critical after one trailer but with their track record, it’s not looking good.

I’m really unsure of this one, guys. Do you disagree with me? Let us know! Pirates of the Caribbean: Dead Men Tell No Tales comes to theaters May 26th.