Home » Stuff We Like » Books » LEGION OF LEIA EXCLUSIVE: ZOE SALDANA ON BOOK OF LIFE AND INSPIRING YOUNG GIRLS 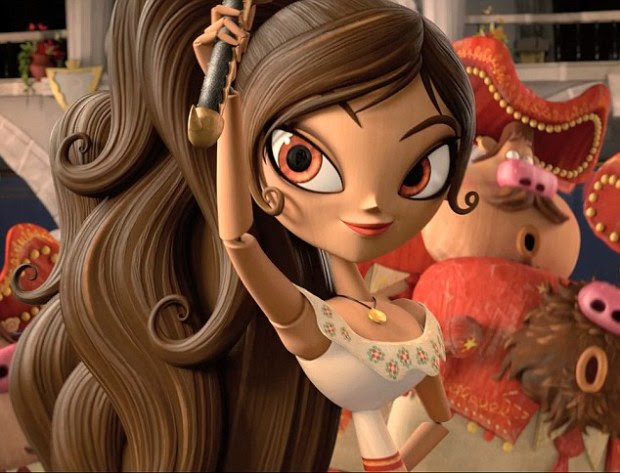 Legion of Leia contributor and all around awesome guy Scott Huver got a chance to chat with Zoe Saldana about her new animated film Book of Life, being a role model to young girls and sharing her work with the twins she’s expecting. Check it out below and follow Scott on Twitter @TheHuve!

With soon-to-be iconic roles in major sci-fi franchises including Avatar, Star Trek and Marvel’s Guardians of the Galaxy, it’s highly likely that Zoe Saldana is going have a profound impact on young girls (and, of course, boys) who’re currently cutting their teeth on genre entertainment – perhaps as much as Carrie Fisher, Sigourney Weaver and Linda Hamilton combined had on an earlier era of fans.

Saldana’s latest effort, the delightful Guillermo del Toro-produced animated film Book of Life features her as the voice of another empowered, action-oriented female – Maria, a young Mexican noblewoman who doesn’t need saving or protecting from either of the two suitors who pine for her. So after the formal press conference for the film, a few reporters and I had a couple casual moments with her and I wanted to ask just how acutely aware she was of the long-term influence her roles would be having on the youngsters who loved them.

With this character and the other characters you’ve played lately, you’ve become a role model to little girls everywhere – an entire generation is going to see at least one of your characters as somebody to emulate. What does that mean to you to be in that position?

Zoe Saldana: It means everything. I can only hope for to be a part of a world where a woman is equal to a man and has the permission and the right to dream anything that she would want to be – and there is nothing inhibiting her from doing it, so I don’t see myself as playing it purposely. I’m playing strong female characters, but I’m playing real women. A woman possesses so many virtues besides just beauty and weakness and vulnerability and sexiness or whatever. Women everywhere around you – your neighbors, your parents, your friends, your wives, your daughters – We’re strong. We’re feisty. We’re intimidating. We are challenging. So if I can have a choice in terms of the material that I want to leave behind for girls to pick up, I want to be a mirror to them: This is who you are. Nobody needs to give you the permission. Nobody needs to give you the acceptance. This is what you see in the mirror, then this is what you should always fight to see and support – and whoever doesn’t do that in your art, you need to use your voice and say “Actually, that is not an accurate depiction of who I am.” I want to live in a world and in my career as an artist where I won’t be told, “You purposely play strong roles.” No. I’m purposely playing women. Because that’s who I am. I don’t know anyone else to be.

You have twins on the way – Is it special for you to be able to share a family film like “Book of Life” with your kids one day?

Zoe Saldana: I’ll be cool for them! Do you understand? You’re cool to your kids until they are like six or seven. I have an 11-year-old niece and no matter what I do – I can be painted green or whatever and she still like rolls her eyes, like “You don’t know anything about Doctor Who! Go away!’”

Your career has been on fire the last few years. You’re in so many amazing movies. You don’t plan on slowing down anytime soon, do you?

Zoe Saldana: Well, I might need to slow down to breastfeed! [Laughs]. But other than that, the sky is limit! As long as I wake up every morning with the passion to be an artist, I’m going to continue knocking on doors, beating down barriers and playing as many roles as I possibly can.

Book of Life will hit theaters on October 17.