‘What We Left Behind’ a STAR TREK: DEEP SPACE NINE Documentary 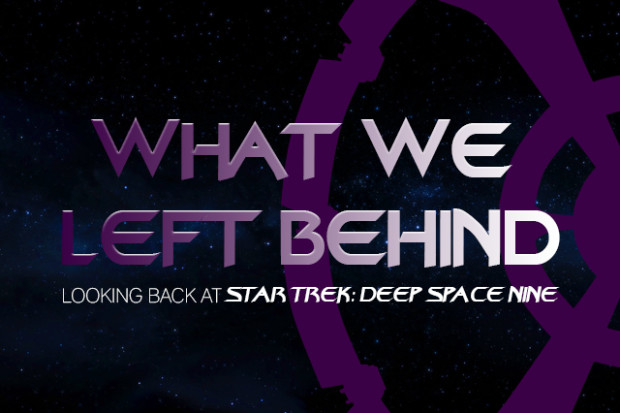 There’s been a lot of Star Trek in the news lately, but this time I’m talking the unfinished documentary about Deep Space Nine titled What We Left behind.

This is very exciting for fans who loved DS9, and that was made abundantly clear when DS9 showrunner, Ira Steven Behr and some of the cast got together to announce an indiegogo fundraiser. The initial goal was $150,000, which was accomplished in one day.

They are now at tip of crossing over into their third stretch goal of $425,000. That’s amazing! Clearly the passion and love for this series  is alive and well.

Take a look at the trailer for indiegogo:

Star Trek: Deep Space Nine first aired in January, 1993 well over a year after the death of Star Trek creator Gene Roddenberry. When compared to The Original Series and The Next Generation, Deep Space Nine was written off as too “dark,” “edgy,” and “the black sheep” of the Star Trek family, a show that did not fit Roddenberry’s vision of the future. But someone was still watching as the show lasted seven seasons. Now, over twenty years later, fans all over the world are rediscovering Deep Space Nine and embracing the show with an enthusiasm rivaling the affection they feel for any other Star Trek series. Critics are even calling the show the Jewel in the Crown and the best of the Star Trek franchise. A devoted sci-fi fan might rightly ask themselves; “What the hell happened?”

Our documentary film, What We Left Behind: Looking Back at Star Trek: Deep Space Nine, will take a detailed look at this historic series and consider the reasons Deep Space Nine went from a family outcast to a Star Trek mainstay.  The film will also contain a “what if” segment in which the original writers brainstorm a theoretical 8th season of the show.

Spearheaded by original show-runner Ira Steven Behr, directed by Adam Nimoy (For the Love of Spock), and with a handful of key interviews already ‘in the bag,’ the #DS9Doc now needs YOUR HELP to reach completion by finishing filming, editing, and post-production.

It’s great to see the cast back together and we are really looking forward to the completed project. Here are just a few names of people involved. So far, Terry Farrell (we love her because she’s a tall lady), Nana Visitor, Alexander Siddig (childhood crush), Michael Dorn, Jeffrey Combs, Colm Meaney, Chase Masterson, Rene Auberjonois, Casey Biggs, Cirroc Lofton, Armin Shimermin, and many more. Even more interviews are promised when What We Left Behind reaches it’s final stretch goal of $500,ooo.

Hollywood Reporter got an exclusive clip from the doc:

What We Left Behind is produced by Ira Steven Behr and directed by Adam Nimoy.

If you donate, to this worthy cause, there are several incentives including posters, DVD and Blu Ray bundles, cast pins, screenings, dinners AND TERRY FERRELL’S TRILL HOUSE HOMEMADE COOKIES! We here at Geek Girl Authority will do almost anything for food and tall ladies.

And this little gem:

Check out our spoiler review for #The355 and if it should be on your must-watch list.