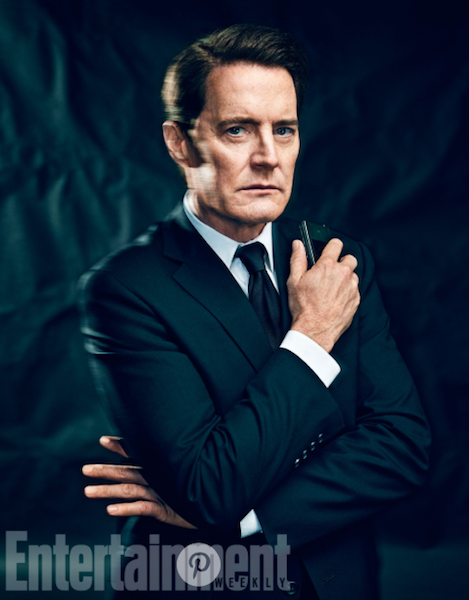 The much anticipated return of Twin Peaks approaches and all of us are wondering what will happen!  In an interview with Entertainment Weekly, Kyle MacLachlan answers none of those questions.  But, he does give insight into Agent Cooper and tell some fun stories, and there’s not a thing wrong with that.

The article is long and, I think, very interesting.  Maclachlan talks about his first film, Dune, his relationship with David Lynch, his thoughts on working on his first TV series, Twin Peaks and playing Agent Cooper.

On Agent Cooper, MacLachlan said,  ‘The personality he gave Cooper was inspired by “little clues” sprinkled throughout the script. “He was boyish. Eccentric. Slightly mysterious, maybe slightly crazy. He had this fascination, this enthusiasm for the minutia of life. He had these incredible powers of observation, but he wasn’t coldly rationale. He was warm and embracing and could enjoy the simple things. Coffee. Pie. Trees. He was, at heart, a good person. Cooper was all on the page. I just breathed life into him.” And that he did.

In the rest of the interview you learn about how the return to Twin Peaks came to be, how David Lynch auditions and how Kyle MacLachlan feels about the whole thing.  Damn good stuff.  I recommend it.