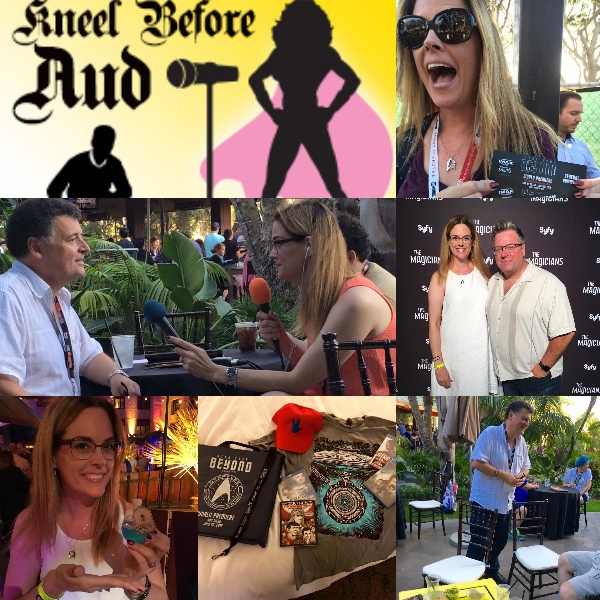 Episode 41 of Kneel Before Aud  is all about Comic-Con and Nerd Origin stories! This is my second annual San Diego Comic-Con edition and folks, Steven Moffat is on it! STEVEN. MOFFAT.

For my SDCC special editions, I ask random folks and celebrities, “What is your Nerd Origin story?”  Now when I ask you what your Nerd Origin story is – I’m asking what event or events or influences made you fall in love with what you’re most geeky about. Since these interviews took place at Comic-Con – you can bet the answers are super geeky.

In Kneel Before Aud, Episode 41, I give you a run down of my SDCC experience and trust me, you want to listen. It was insane!  It was magical! It was insanely magical! Somehow I ended up at the Star Trek Beyond WORLD PREMIERE! I went to so many ridiculous parties (they didn’t chase me out for some reason) including the Syfy: The Magicians party, Wired Cafe and the exclusive Nerd HQ party to name a few.

The best party, of course, was the Geek Girl Authority mixer!  And this is where I grabbed Steven Moffat for his Nerd Origin story – at our mixer! Granted, it’s funny story about why he was anywhere near our modest party and you will hear that in the podcast. In addition to that experience, I chat about how I ended up at the Star Trek Beyond world premiere where J.J. Abrams gave a tear jerking salute to Anton Yelchin, my foray onto the convention floor where I ended up buying ill fitting Star Trek underwear and then of course, the Nerd Origin stories!

Here’s who you will be hearing from:

Heather Brooker – Heather is an actor, writer and host/creator of the Motherhood in Hollywood podcast. Heather also, along with myself and Claudia Dolph, hosts the amazing podcast Booze and Phasers.

Heather Harper – Heather brings it to the table with He-Man – seriously.

Enjoy Episode 41 of Kneel Before Aud!

Listen by clicking the “play” arrow below or click here to listen on iTunes!